One shot in the head, another in the gut, and a third in the arm allegedly by militia member

by Archive
in Breaking News, News

Three were allegedly shot by Kyle Rittenhouse during the ongoing civil unrest in Kenosha, Wisconsin on Tuesday night. Two were shot fatally while rioters looted a car shop in the city, with one man apparently shot in the head, then a second in the gut and a third in the arm after a crowd chased and tackled the shooter who was reportedly part of a militia group protecting local businesses.

Live streams captured multiple gun shots around midnight, with one man appearing to be shot in his head, and a chunk of another man’s arm visibly exploding in the graphic video as a third man slumped on the ground with a gut wound.

The man who appears to have been shot in the head has since been hospitalized. His condition is unknown at this time. Police now confirm National File’s reporting of three gunshot victims. Police now say two were shot fatally, while one was seriously wounded.

I will update who shot him! pic.twitter.com/xZ6v5mpI82

Elijah Schafer reported that witnesses claimed it was a “boogaloo boy militia protecting a business that was being destroyed” while speaking to police, and reported that another witness confirmed this to him on camera.

“That is what I saw too but I had to confirm,” wrote Schaffer. “Details can still change.”

A second witness told me the same account off camera

That is what I thought I saw too but I had to confirm. Details can still change pic.twitter.com/3CnPtODX5o

However, our source believes the alleged shooter was acting within his legal rights to defend himself.

It appears that after the first man was shot, a group of rioters attempted to chase the shooter, which may have led to the second man’s arm injury.

Footage captured by Town Hall’s Julio Rosas shows “multiple gunshots” fired “after people chased a guy with the rifle,” who some are saying is the same shooter. “He fired his gun at a guy who jumped on top of him,” reported Rosas.

🚨🚨🚨: Multiple gunshots are fired after people chased a guy with a rifle. Rifle dude tripped and fell. He fired his gun at a guy who jumped on top of him. pic.twitter.com/BfV244MMnc

More clear video from Brendan Gutenschwager appears to show the same man be tackled to the ground, shoot one of his pursuers in the gut, then shoot another in the arm.

(Warning, Graphic/Violent)
A crowd chases a suspected shooter down in Kenosha. He trips and falls, then turns with the gun and fires several times. Shots can be heard fired elsewhere as well, corroborating reports of multiple shooters tonight #Kenosha #KenoshaRiots pic.twitter.com/qqsYWmngFW

Schaffer noted that some rioters did not seem perturbed by the violence, and it continued within seconds of the dramatic shooting.

“Within 60 seconds of the shooting rioters were attempting to light an SUV on fire at a car shop that was operated ironically by one of the rioters,” wrote Schaffer. As Schaffer approached, he says “multiple rioters were” in the process of “destroying a silver sedan using metal bats.”

CLIP 3: as I approached the car being lit on fire multiple rioters were destroying a silver sedan using metal bats pic.twitter.com/gvkVQNjgg5

Daily Caller reporter Richie McGinniss happened to be at the scene when the shooting happened, and rushed to help one of the injured men, using his shirt to attempt to stop the bleeding.

The guy in this video helping the man who had just been shot is Daily Caller reporter @RichieMcGinniss.

Literally taking the shirt off his back to help save his life.pic.twitter.com/P59hoUDYj6

National File reported that one of the men allegedly shot by the militia member himself had a pistol:

Instagram user LourieAlex notes that “Shootings occurred tonight during protests in Kenosha, Wisconsin. This injured victim was treated by civilian volunteers before the police intervened.”

Specifically, LourieAlex notes “The injured man was also armed at the time he was shot. The man was not shot by law enforcement.”

The man is seen in the second photo of the Instagram post with his arm severely wounded, still holding a pistol. 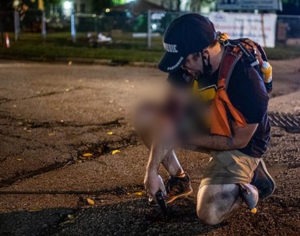 Video shows the alleged shooter attempting to surrender to police before being tackled by BLM rioters.

It is now clear the alleged shooter was attempted to reach a line of police vehicles rapidly racing toward the scene, likely in response to the first shooting when he was tackled by rioters.

Additionally, National File reported that one of the two men allegedly shot by the militia member was carrying a pistol while at the event, and was still clutching it after he was shot and receiving medical treatment.

Rittenhouse was eventually arrested after the scene, but released. He was later arrested in Illinois.

A new video has been created using different clips uploaded to social media, appearing to show Kyle Rittenhouse acting in self defense.

In the footage, the red shirted rioter who was seen earlier screaming “shoot me ni**ga” can be seen chasing Rittenhouse after tying the red shirt around his own head.

The rioter can be seen throwing a heavy object at Rittenhouse, before chasing him around the side of a car.

One shot, seemingly not from Rittenhouse’s weapon, can be heard as well as the chant “f**k you” in the background as the looter closes in on Rittenhouse, who turns and fires several shots, dropping the assailant to the ground.

REVEALED: Multiple Angles Confirm Shooting Was In Self Defensepic.twitter.com/2iz2XJrkhQ

Violence continues to erupt in Kenosha after an officer involved shooting of a man rapidly reaching inside his vehicle last weekend.

This article was updated to include a statement from a person affiliated with the Boogaloo Movement.

This is a developing news story and may be updated as more facts become available.