Exclusive Photo Shows Him Living With His Sister

North Carolina’s Democrat nominee for U.S. Senate, Cal Cunningham, has moved out of his family’s Raleigh home and is now living with his sister, according to photos of Cunningham taken at his sister’s house obtained by National File.

Rumors that Cunningham was kicked out of his family home have flown since National File’s Patrick Howley broke the news of his affair with the wife of a junior Army officer earlier this month – an affair that violates military rules and has sparked an official U.S. Army investigation as Cunningham serves as a Lt. Colonel in the U.S. Army Reserves.

On October 2, Cunningham admitted to exchanging sexual text messages with Arlene Guzman Todd, a California resident who previously lived in Raleigh. Additionally, Todd has confirmed that she and Cunningham had sex in July of this year.

According to concerned Raleigh residents with knowledge of Cunningham’s whereabouts, he last stayed overnight at the $630,000, 3,200 square foot home he shares with his wife and two children in the city’s Cameron Village on October 10.

Since then, Cunningham has been staying on Raleigh’s Manning Place in a 5,825 square foot, $1.5 million home his sister Catherine purchased with her husband in 2018.

On October 22, at 6:30 a.m., journalist Don Carrington captured a photograph of Cunningham exiting the garage of his sister’s home before quickly entering a car that had pulled into the driveway seconds earlier. The driver of the car, who appeared to be a Cunningham campaign staffer, immediately backed out of the property and drove away with Cunningham in tow, following a pattern that has also been observed by others, who have reported seeing Cunningham exit his sister’s home in the early morning hours and return later in the day. 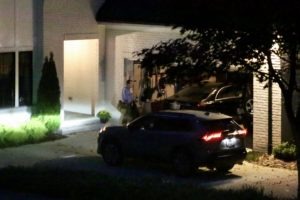 In addition to Cunningham’s comings and goings at his sister’s home, it did not go unnoticed that on Tuesday, October 13th, just three days after Cunningham is reported to have last stayed at his family home, he took part in a 30 minute Zoom interview with the North Carolina teachers union as part of a weekly show titled “Tuesdays With Tamika.”

Despite his wife’s considerable work in education, and statements on his campaign website praising her dedication to education policy work, Cunningham made no mention of her during the interview.

Prior to the admitted affair and Army investigation, Cunningham’s wife, Elizabeth Kolb Cunningham, was a vocal supporter of her husband’s campaign efforts. “Simply put, Cal’s in this race to take your voice to Washington and to stand up for your values,” she wrote in an email to supporters of his 2010 run for U.S. Senate.

In that election, Cunningham missed out on his party’s nomination by exactly 20 points after forcing a run-off vote against Elaine Marshall, North Carolina’s current Secretary of State. Marshall was later defeated by incumbent Republican Senator Richard Burr by a margin of 14 points.

In a tweet dated May 13 of this year, the couple’s 20th wedding anniversary, Cunningham wrote of his wife, “I’m grateful to be on this journey with my best friend, who warms with her smile, keeps me on my toes with her wit, and awes me with her determination to make the world a better place.” In a subsequent post, Cunningham stated he was “especially grateful” for Kolb Cunningham’s “patience and grace, as I do my best to balance the demands of the campaign with our family.”

Five months later, he is not living at home, and his campaign for U.S. Senate appears to be in free fall.