China’s G-TV, the outlet that first broke the Hunter Biden sex tapes onto the internet, has released another video in which they make claims, yet unconfirmed by National File, alleging the Bidens were blackmailed and bribed into acts that directly acted in the worst interests of the United States.

Frames at the end of a video published on line by G-TV, a Chinese channel in Mandarin, allege that not only were the Bidens compromised by the Communist Chinese government through bribery and blackmail, they were part of China’s territorial moves in the South China Sea.

One of the channels frames stated that Chinese Communist Party operatives, “take advantage of all those Western politicians, celebrities, and their families who are greedy for Chinese wealth, and threaten them by getting hold of and recording their sex and drug videos, forcing them to sell out their countries and people, and even their own national security.” 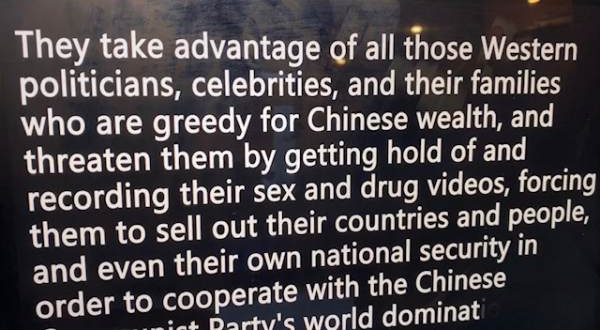 A following frame declares that “US presidential candidate Joe Biden is 100% controlled by the Chinese Communist Party.”

But the most serious claim centers on the exposing of Central Intelligence Agency assets.

A 2017 report by the New York Times reported the disappearances of 18 to 20 CIA sources from 2010 to 2012. The Times reported that investigators didn’t know whether it as a mole at the CIA or whether the Chinese were able to hack into a CIA database, but stated the number of assets lost in the breach rivaled those who were eliminated after information passed to Moscow by spies Aldrich Ames and Robert Hanssen.

It is this incident to which the last frame of G-TV’s video alludes. It reads, “…as well as Biden’s provision of large numbers of CIA intelligence agents in China to the Chinese Communist Party.” 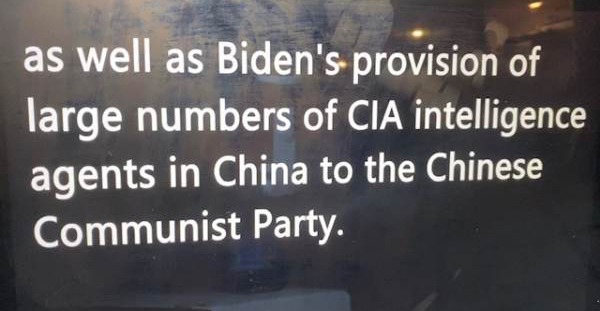 At the time of this post, National File has been unable to independently verify the veracity of G-TV’s claims. Should they be true, this would open a completely different set of concerns not only for the Bidens, but for the American people and the US government.