Video: Jordan Peterson Calls It ‘Naive’ To Believe Ukraine Will Defeat Russia And ‘Foolish’ To Equate Putin To Hitler

Jarome Bell, a 2022 candidate for U.S. House in Virginia’s 2nd district, was suspended from Twitter Thursday following the publication of a Newsweek article that called on the platform to censor him over a tweet advocating for those tried and found guilty of election fraud to face the death penalty. The suspension follows a similar incident just one month ago when Twitter locked Bell’s Twitter account after determining that he had violated the Taliban’s “right to privacy.”

Quoting heavily from responses to the Tweet by anti-Trump ex-GOP Congressman Denver Riggleman, as well Fred Wellman of the disgraced Lincoln Project, Newsweek published an article three days after the tweet was posted titled “Twitter Won’t Remove Pro-Trump Candidate’s Call to ‘Execute’ Election Fraudsters.” The article highlighted left-wing outrage over Bell’s call to investigate and try those suspected of stealing a presidential election in the United States of America and claimed that the Arizona audit had “upheld President Joe Biden’s win.”

Now, two days following the publication of Newsweek’s article calling for Bell to be censored, Twitter has suspended the congressional candidate from the platform. Additionally, it appears that Bell’s massive collection of followers has been erased from his profile, as well as his former tweets, and his account no longer appears in Twitter search results. 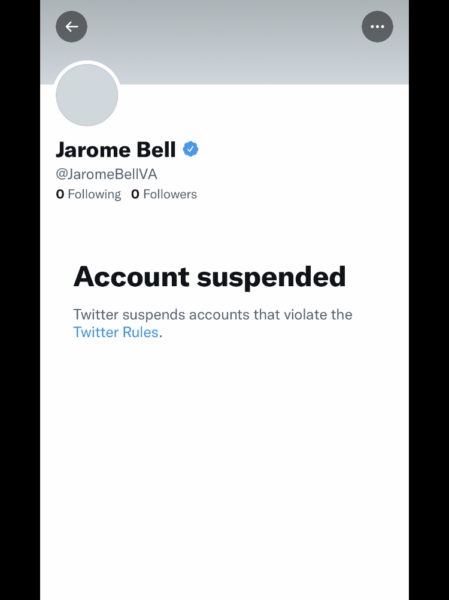 In a statement to National File, Bell blasted China-tied big tech and their censorship policies, accusing them of election meddling and questioning why a black patriot would be kicked off the Twitter platform when open pedophiles, as well as Taliban terrorists, operate on the site with impunity.

“This is what happens when you are over the target and shooting missiles at bunkers and busting everyone,” Bell said. “The Taliban and pedophile accounts are still active but a black conservative trying to save Virginia and this country gets silenced by the big tech communists that are allowed to run wild in what we used to know as the land of the free and the home of the brave,” he continued. “China-controlled Twitter and Facebook have been given free rein to meddle in U.S. elections.

As previously reported by National File, just one month ago, Twitter locked Bell’s account after he posted a video exposing a barbaric Taliban execution because the big tech corporation determined he had violated the Taliban’s “recognized right to privacy.” Additionally, Bell’s Twitter account was suspended in 2020 when he was seeking the GOP nomination to Congress in Virginia’s 2nd District for the first time. His account was only brought back online after the nomination process, and he had to start from scratch with no followers as if it were a new account.

Bell has taken on big tech before, and recently filed a lawsuit against Facebook in federal court, alleging anti-Christian censorship and electioneering in favor of Democrat candidates.

“These tyrants want to keep the internet under lock and key so as to prevent the rise of Donald Trump’s America First populism,” Bell said in a press release at the time his suit was filed. “And I’m here to stop it.”