Engelbrecht and Phillips were arrested around 10:30 AM local time on Monday at the Bob Casey United States Courthouse in Houston, Texas.

True The Vote (TTV) co-founders Greg Phillips and Catherine Englebrecht were taken into custody by officers of the United States Marshals Service (USMS) on Monday morning in Houston, Texas, at the order of Senior United States District Judge, Kenneth Michael Hoyt, of the Southern District of Texas (SDTX), after Phillips declined to identify the third man present at a January 2021 meeting with FBI Confidential Informant (CI), Mike Hasson, where Konnech Inc. data was allegedly accessed.

Video of Engelbrecht and Phillips as they were escorted out of the courtroom by US Marshals was published by former DEA Special Agent and public intelligence analyst, Maj. Jeffrey Prather (RET.), on Monday.

As I broke live this morn on https://t.co/CXwaMwqMQb
Greg Phillips & Catherine Englebrecht jailed by corrupt judge for refusing to out their source! pic.twitter.com/NgjD05RDhp

“The FBI is equivalent to the KGB. When the GOP takes control of the House and Senate, they need to repeal the powers given to the intelligence community after 9/11,” Dooley said. “The FBI thugs are going after dissidents of the Biden Administration.”

When the GOP takes control of the House and Senate, they need to repeal the powers given to the intelligence community after 9-11.

The FBI thugs are going after dissidents of the Biden Administration. https://t.co/tQ1I6X6whv

Mike Hasson was issued a civil action summons, but it has been reported that Hasson has gone into hiding out of fear for his safety. 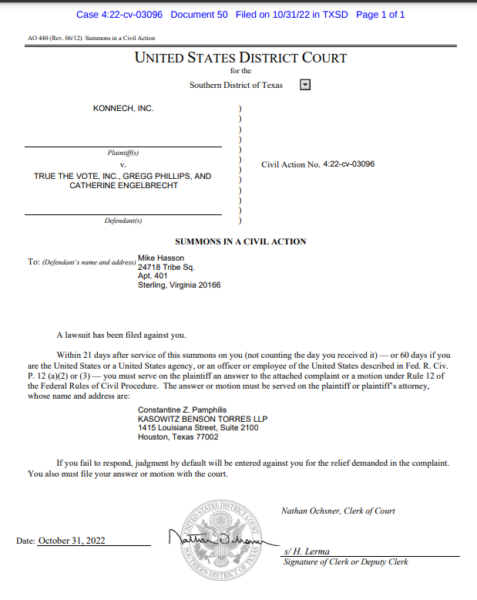 Investigative reporter, George Webb, attended the 9:00 AM hearing at the Bob Casey United States Courthouse in the case of Konnech Inc. v True The Vote Inc. (4:22-CV-03096) and witnessed the arrest, which happened around 10:30 AM.

Catherine Englebrecht and Gregg Phillips taken into custody in the Courtroom here in Houston this morning. pic.twitter.com/eYEqXiwDee

Phillips stated that Mike Hasson, the identified man present at the meeting, was a Federal Bureau of Investigation (FBI) Confidential Informant (CI).

“It all comes down to this meeting in this Dallas hotel, where they were accessing, supposedly, the Konnech servers,” Webb said. “Catherine Engelbrecht [was] not at this meeting. Only Gregg Phillips [was]. [Phillips] said he’s a confidential informant. [Phillips] said this other gentleman named Mike Hasson, who was there, also is a confidential informant for the FBI.”

The third man at the meeting is the person that the federal government wants to identify.

“The defense also said the other third person was also a confidential informant, they just don’t want to give up the name of the third person,” Webb said.

Webb suggested that the court is being weaponized in order to charge the defendants on a process crime. 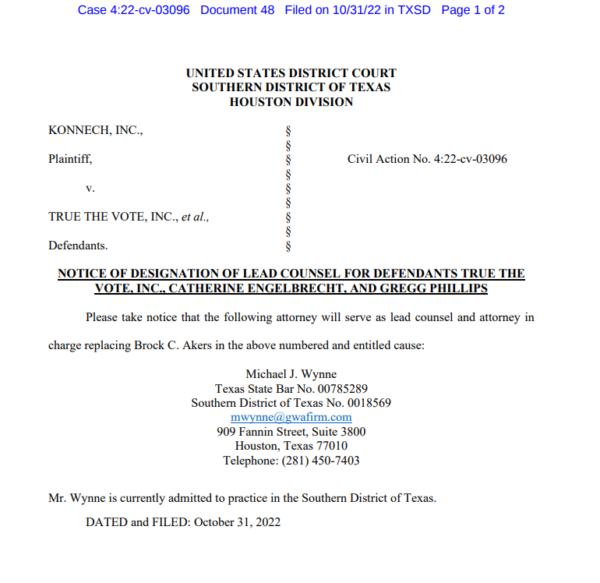 The investigative journalist brought up the idea that the Engelbrecht be defended independently of her TVV partner.

“[They’re going to put her in a] sweat box, [to] hot box the witness, until she gives this [name] up,” Webb said. “This is sweating the witness to try to get process crimes.”

“I really would suggest that she split herself from the Phillips attorneys. I think this is a big mistake,” he added. “Ask for a split defense right now.”