The CBP Field Operations Officer accidentally showed a pornographic photo on a projector after he unlocked his phone in an outreach presentation at a junior high in Texas on Wednesday.

An Office of Field Operations (OFO) officer of the United States Customs and Border Protection (CBP) “inadvertently” displayed a pornographic photo to schoolchildren during an outreach presentation at Sharyland North Junior High School in McAllen, Texas on Wednesday.

The McAllen Police Department (MPD) issued a press release on Wednesday, October 26th at 5:39 PM local time in which they initially described the individual in question as a Border Patrol Agent. CBP later confirmed on Thursday that the episode involved a CBP officer with the USCBP Office of Field Operations, and not a Border Patrol agent as originally reported. 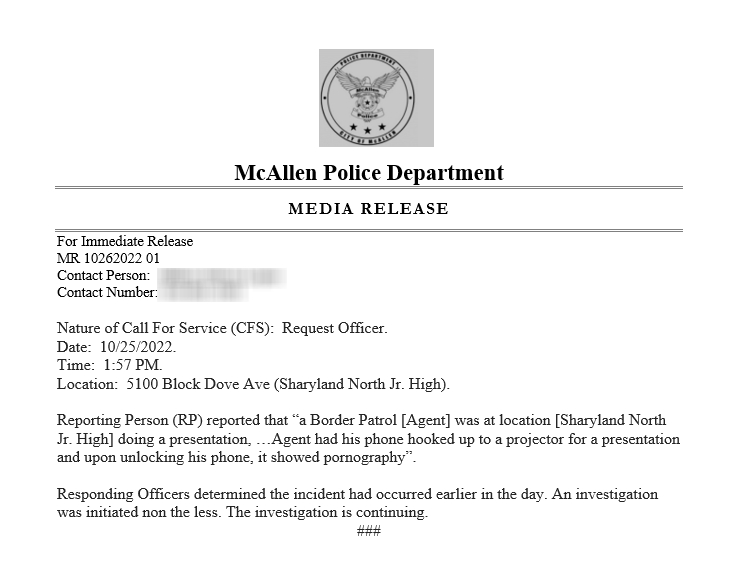 A U.S. CBP public affairs officer, Roderick Kise, made a statement about the incident on Wednesday.

“During an outreach event, a U.S Customers and Border Protection officer assigned to the Rio Grande Valley was utilizing his personal phone when an inappropriate photo was inadvertently displayed on his phone screen while presenting,” Kise said.

“CBP stresses professionalism, honor, and integrity and does not tolerate actions by any employee that would tarnish the agency’s reputation. CBP is still collecting information and cannot comment any further as the situation is under investigation.”

“The Reporting Person (RP) reported that ‘a Border Patrol Agent was at location Sharyland North Junior High School doing a presentation….[The] agent had his phone hooked up to a projector for a presentation and upon locking his phone, it showed pornography,'” the McAllen Police Department (MPD) said.

“Responding Officers determined the incident had occurred earlier in the day. An investigation was initiated non the less. The investigation is continuing,” MPD added.