Mark Finchem, a Republican, was locked out of his account for unknown reasons and has told the ban may continue until election day

Mark Finchem, the GOP candidate for secretary of state in Arizona, was locked out of his Twitter account just under 10 days before the election. When new Twitter boss Elon Musk was informed of the issue, he said he will be looking into it. Less than an hour after Musk’s tweet, Finchem’s account was restored.

With such a short window between the time of the banning, October 31, and Election Day, November 8, it was very possible that the candidate for the crucial office may be locked out of his account until all votes are cast. 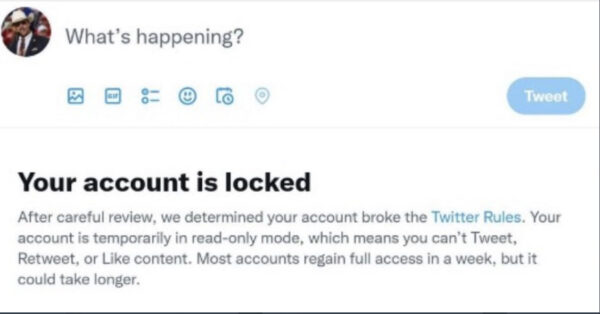 Finchem took to Facebook and other forms of social media to announce the news. He urged supporters and opponents of big tech censorship to tag Elon Musk and put an end to the election interference immediately.

“Twitter has blocked my account from speaking truth with one week left until the election. They are trying to put their thumb on the scales of this election,” Finchem wrote in a Facebook post. “Tag Elon Musk and tell him to unban me right now. I am the Secretary of State nominee in a swing state running against the criminal Soros-funded candidate.” 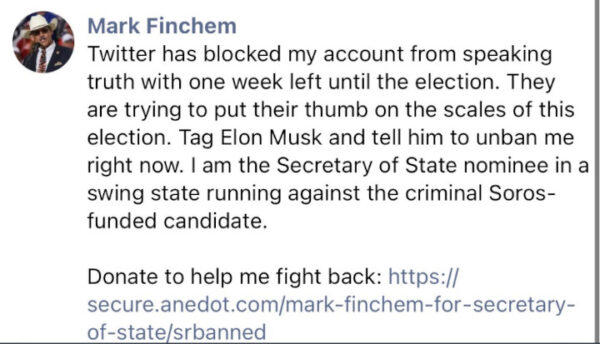 A number of conservative outlets and activists took to Twitter in an effort to get Musk’s attention and put a stop to the censorship.

In a response to former Trump legal analyst Jenna Ellis, Musk said that he would be “looking into” the matter.

A little over an hour after Musk’s comment, Mark Finchem’s account was fully restored. “We are back! Thank you @elonmusk for stopping the commie who suspended me from Twitter a week before the election,” Finchem wrote in a tweet. “Twitter is much better with you at the helm.”

Finchem went on to thank a number of people who helped to spread the word, including Ellis, Kari Lake, and the conservative outlet Media Right News.

We are back! Thank you @elonmusk for stopping the commie who suspended me from Twitter a week before the election. Twitter is much better with you at the helm. Thank you @MediaRightNews1 @JennaEllisEsq @KariLake @Brick_Suit & others for spreading the word! #AZSOS https://t.co/TfdJNnnuIm

A recent CNN poll had Mark Finchem leading over Democrat challenger Adrian Fontes with 49 percent of the vote to his 45.

RELATED: Mark Finchem Warns ‘Merrick Garland And His Team Of Thugs’ To ‘Tread Very Lightly’, Stay Away From Audit