A "grassroots" organizer for an establishment Republican is currently banned from the Republican Party for supporting Democrats.

Jim Kaczmarek, a top “grassroots” supporter of former Republican Congressman Scott Taylor’s bid to win back his old seat in Virginia’s 2nd District is currently serving a four-year ban from the Republican Party of Virginia’s nominating events and official committees as a result of supporting Democrat candidates for office.

Kaczmarek, who heads up the Facebook page of the “Scott Taylor Eastern Shore Grassroots ‘Seal the Deal’ team,” previously served as the 2nd District GOP’s Vice Chairman, before resigning amidst calls for his dismissal. The calls came after Kaczmarek was exposed as the man behind at least 8 phony Facebook accounts used to write a flurry of vulgar, threatening posts and messages directed towards then-Congressman Scott Taylor’s 2018 primary opponent, Mary Jones, and her supporters.

When the race was over, Kaczmarek posted a video to Facebook lauding Lewis’ victory as he was “getting the last of the [Lynwood Lewis] campaign signs I put up taken down.”

“It was an election win for me. The state of Virginia lost, but that’s not my problem,” Kaczmarek told viewers of the previous night’s election results, which saw the south’s most radical state-level Democratic Party take full control of Virginia’s legislature for the first time in a generation.

Much like his attacks on Mary Jones, Kaczmarek’s support and volunteer activities in favor of Senator Lewis and other Democrats drew the ire and disgust of fellow Republicans. In response, Kaczmarek was banned from acting in a number of official party capacities for a period of four years, as outlined in a letter from Accomack County Republican Party Chairman Wesley Edwards, obtained by National File.

“I write to remind you of the provisions of the Plan of Organization of the Republican Party of Virginia that prohibit you from participation as a member of the party in its nominating events and official committees for a period of four years from the November 4, 2019, General Election. You participated in the nominating process of the Party of Accomack County and in doing so made a statement of intent to support all of the Party’s nominees in the ensuing election…You subsequently supported Lynwood Lewis…I note that this is not the first time that you have supported a Democrat.” 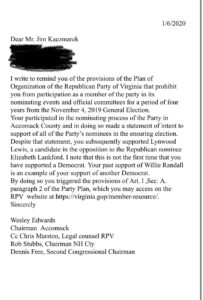 Despite the four-year ban and previous misconduct, Kaczmarek appears to remain heavily involved with Scott Taylor’s congressional campaign, appearing in a number of photographs alongside the candidate at campaign events, and continuing to serve as a campaign volunteer, while operating the aforementioned “Scott Taylor Eastern Shore Grassroots ‘Seal the Deal’ Team” Facebook page. Kaczmarek also continues to share Taylor campaign-related content from a slew alternate accounts. In a video recently posted to the “‘Seal the Deal’ Team” page, Kaczmarek dismissed concerns of Taylor’s alleged involvement in a 2018 election fraud scandal – along with the subsequent conviction of a former campaign staffer related to the case – saying, “They wanted to impress him by completing the task. They didn’t want to fail. I get it.”