WATCH: Democrat Explains Why he is Voting for DeSantis

COVID seems to be the ultimate scapegoat for bad preparation

by Tony Ortiz
in Coronavirus, News

Scott Friedman of NBC DFW has announced that ERCOT is using COVID-19 as its excuse for not winterizing the Texas power grid in time for the winter weather disaster that saw millions of Texans without power.

“NBC5 Investigates has learned ERCOT inspections designed to ensure power plants are winterized did not happen as usual this year,” wrote Friedman. “Due to COVID they were virtual tabletop exercises, not in-person inspections. ERCOT says it’s too early to say if that played a role.”

NBC5 Investigates has learned ERCOT inspections designed to ensure power plants are winterized did not happen as usual this year. Due to COVID they were virtual tabletop exercises, not in-person inspections. ERCOT says it’s too early to say if that played a role. ⁦@NBCDFW⁩ pic.twitter.com/dvKRSBzhpz

Many see the blackouts in Texas as a blessing in disguise for both Texas Democrats and establishment Republicans, as it has provided a distraction from their failing policies and an opportunity to score political points.

Even Democrats from outside of Texas are benefiting, as Rep. Alexandria Ocasio-Cortez has raised over $4 million in donations for Texas recovery. She has also blamed the lack of acceptance of a Green-New-Deal for the blackouts in Texas:

The infrastructure failures in Texas are quite literally what happens when you *don’t* pursue a Green New Deal.

To be clear: There will be hell to pay for energy companies or providers who take advantage of or overbill Texans after this crisis. I don’t care if it is permissible or legal. Every company should think long and hard before you send those energy bills to Texans. #txlege

Normally this would be impressive except that Jeff Leach ran a campaign on being a “dog dad” and has been a documented failure in office: 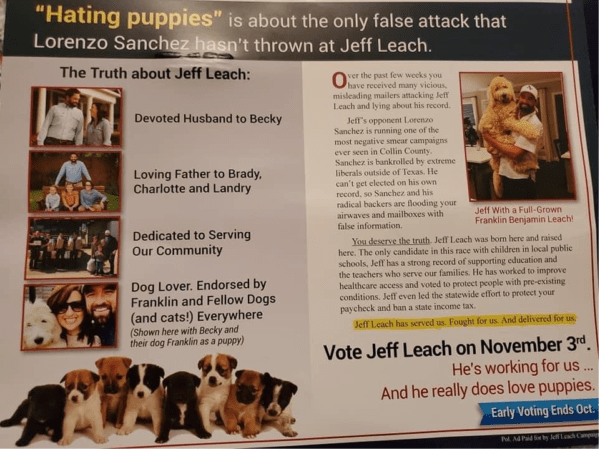