Texas based news site Current Revolt is reporting on the current energy crises Texans are facing. Days after Fake President Joe Biden signed an executive order canceling the Keystone XL pipeline, Texans found themselves buried in snow, without power, and about to freeze to death.

Here is the graph from ERCOT in the days leaning up to the Texas electrical grid failure. 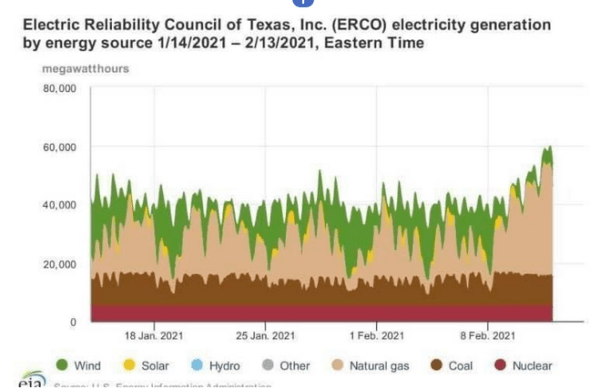 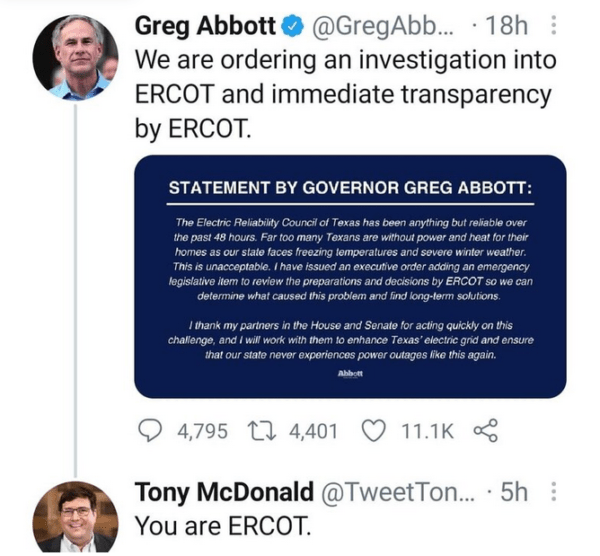 However, all the Texans without electricity probably aren’t getting this message because they can’t turn on their electronics. 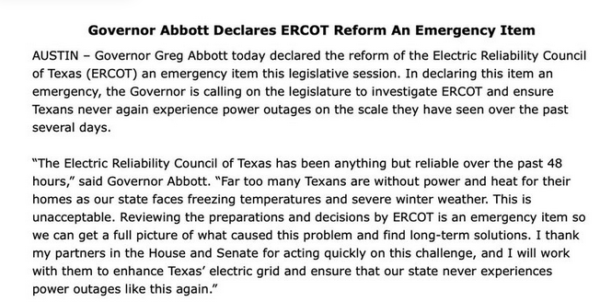 Of course, it goes without saying that if Democrats were in charge most people would have frozen to death by now. They have been pushing this “global warming” agenda whereby they claim carbon dioxide, a fundamental compound for life on earth, is suddenly some kind of pollutant.

You cannot be against “carbon emissions” without necessarily being anti-human, as the only way to achieve meaningful cuts in carbon output would be to eliminate huge numbers of people. Most people are already primed for this idea due to our terrible schools teaching about “overpopulation” as a part of the official state religion of earth worship.

“We must cut through the finger-pointing and hear directly from stakeholders about the factors that contributed to generation staying down at a time when families needed it most,” Phelan said. – Austin American-Statesman

Phelan is making this statement because most of the finger pointing belongs at him.

Did you know there have been bills filed every session since 2015 to begin the process of hardening the Texas electric grid? It’s true. Here is one from last session. Which Texas Republicans had the foresight to secure the Texas electrical grid? 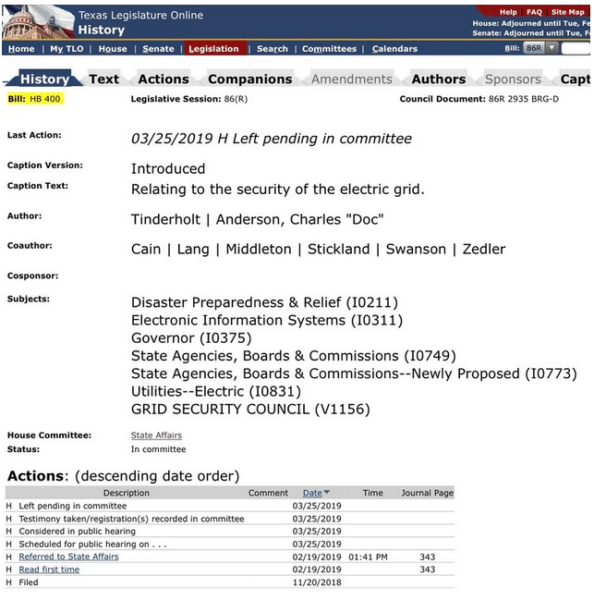 These are the only State Reps who thought the electric grid was a serious issue.

The grid security council shall evaluate security vulnerabilities of the electric grid and strategies for securing the grid against:.. “weather threats”

What happened to this bill?

Who was the chair of the committee?

It was current Texas Republican Speaker of the House, Dade Phelan. 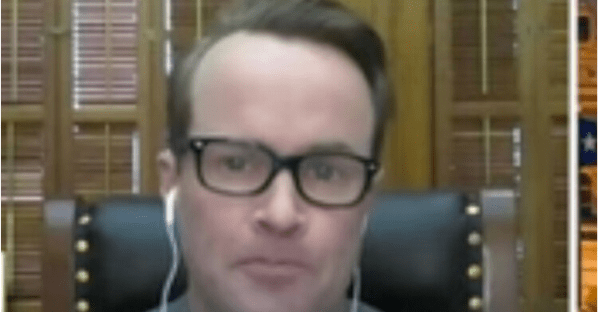 How is Phelan’s district doing right now in the midst of this disaster?

Greg Abbott and the rest of the Texas Republicans legislature who blew off this issue are going to try and blame ERCOT. Abbott is saying these people should resign.

Texans never voted for anyone in ERCOT. What are the people of Texas supposed to do about ERCOT?

The chairman of ERCOT doesn’t even live in Texas, but Minnesota.

Oncor, the electrical provider of Texas, is owned by Sempra Energy, headquartered out of California. The sale to this company was authorized under the purview of the Texas legislature. 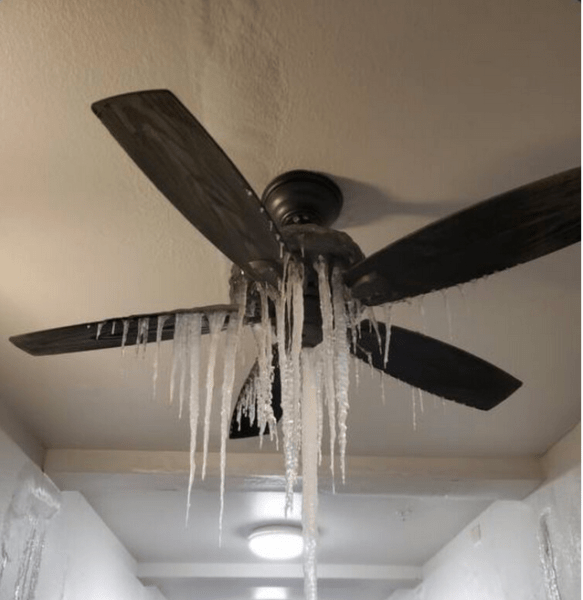 Every Texas politician is in panic mode right now. They’re suddenly concerned about the electric grid after they stood by for years as the establishment mocked people like actual patriot and real conservative Senator Bob Hall, who has been trying to address these vulnerabilities.

At a quick glance, you see the energy sector’s special interests are spending millions and millions of dollars on lobbyists every year. There are 134 pages and it seems to be somewhere between $40M – $100M per year on lobbyists. If you want to find the exact number the link is right here.

Why does an electrical company need lobbyists for a product that everyone needs?

So what have Texas legislators been working on instead of securing the Texas electrical grid?

Dade Phelan, instead of looking at serious issues, has instead been focusing on “diversity” and the genitals of his appointments serving on house committees as being some kind of grand achievement.

Meanwhile, people are freezing to death.

Texas Republican Giovanni Capriglione has been focusing on pet leasing: 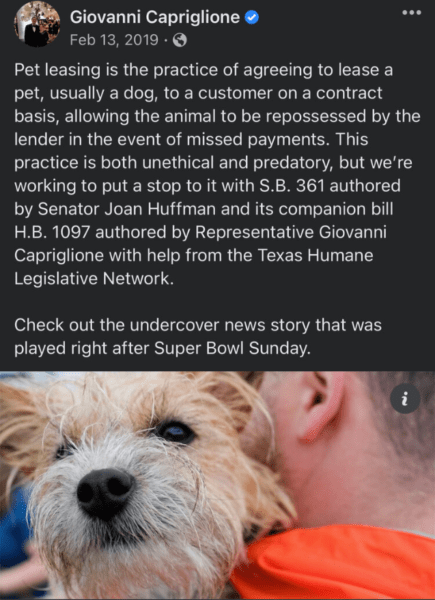 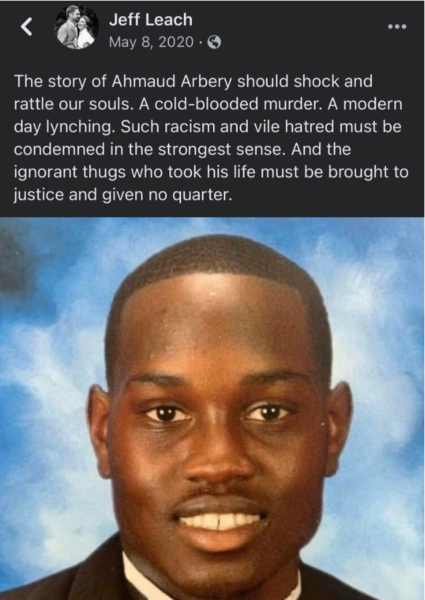 Of course other politicians are getting paid big money to waste Texan’s time in Austin. Here’s a list of just some of the Texas politicians that received money from Oncor’s political action committee: 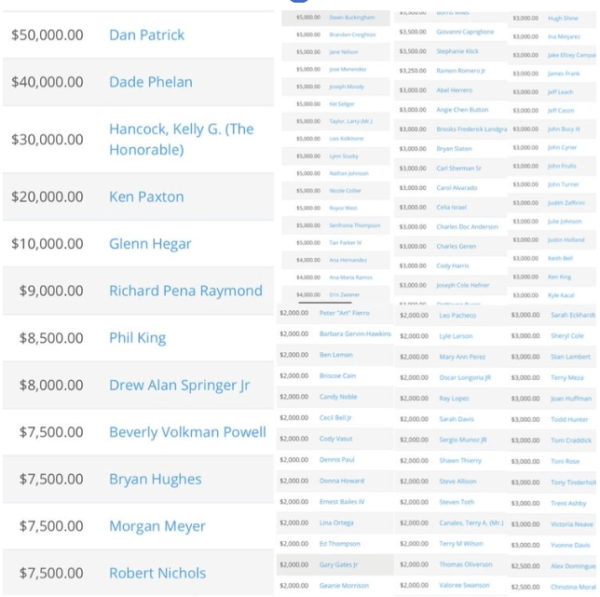 For a year now, all these Texas legislators have been telling Texans to worry about the covid problem. They’ve spent every waking second telling Texans to cover their face, to not visit friends and family, how close to stand next to one another, and how their entire lives must revolve around germs.

Texas Republicans blew off the hard problems, like securing a vulnerable electric grid, all because they apparently didn’t want to rock the boat with the people writing massive checks to their re-election campaigns.