Talent Agent: Alec Baldwin ‘Does Not Care About The People He Hurt’ Or Killed, ‘He Only Cares About Whether He Is In Trouble’

Talent Agent: Alec Baldwin ‘Does Not Care About The People He Hurt’ Or Killed, ‘He Only Cares About Whether He Is In Trouble’

And he could be in a lot of trouble, according to legal experts

by Frankie Stockes
in Culture, News

An agent and publicist blasted Alec Baldwin in a Facebook post after the Rust movie set shooting that left cinematographer Halyna Hutchins dead and a director injured when Baldwin discharged a prop gun. According to Monty Warner, Baldwin’s displays of grief and emotion were motivated by the actor’s interest in avoiding punishment.

Washington, D.C.-based publicist and agent Monty Warner made the remarks regarding Alec Baldwin in a Facebook post, recounting a story of the day that Days of Our Lives actress Brenda Benet ended her life. According to Warner, Baldwin was then having a sexual relationship with Benet, who was his colleague on the daytime soap opera.

Warner apparently came to know Benet through Tammy Bruce, whose first two books he “promoted and agented” because Bruce, Warner wrote, was also in a sexual relationship with Benet. When Bruce discovered Benet committed suicide, per Warner, the Fox News personality immediately called the police and then the set of Days of Our Lives to inform them of the tragedy.

When Bruce called the set, Warner wrote, “She gets Baldwin on the phone and all he said was: ‘Did she kill herself because of me?'”

“This guy does not care about the people he hurt/killed,” Warner asserted after relaying the story. “He only cares about whether he is in trouble.” 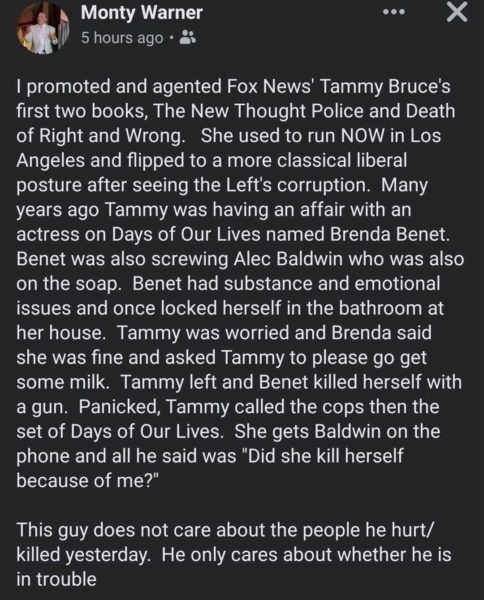 Baldwin has received sharp criticism in the aftermath of the fatal shooting, with some accusing the media and entertainment industry of attempting to to frame the incident in a positive light for the liberal actor.

In the immediate aftermath of the shooting, professional photos were even released, showing a purportedly frantic Baldwin making an emergency phone call while clutching a medical face mask in the parking lot after speaking to police. The photo stands in stark contrast to the actual 911 call made to report the incident, in which an employee of the film production team very calmly told dispatchers that there had been an accidental shooting on the movie set.

BREAKING: A distraught Alec Baldwin, after he accidentally shot & killed the cinematographer on the set of his new movie, & wounded the writer-director. How on earth could this have happened?
Pics: Jim Weber ⁦@thenewmexican⁩ pic.twitter.com/xrvcheLaCK

While the reported cause of the shooting has varied based on the day and news release, the latest versions of events indicate that Baldwin shot dead Halyna Hutchins and wounded Joel Souza while rehearsing the drawing of his weapon despite a prop master saying on record that, with a unionized crew and a professional prop master, an actor will never point a weapon at another person until the scene has been rehearsed several times and the firearms expert believes the actor is ready.

Baldwin, who is producing the movie, has been blasted alongside others behind the low-budget film by many in the entertainment industry over the use of a non-union local movie crew in an apparent effort to save money. Additionally, shortly before the fatal shooting, crewmembers reportedly walked off the set in protest of poor safety conditions.

Some reports have suggested that an under-qualified member of the production crew actually handed Baldwin a “live” handgun loaded with either blanks or real ammunition while telling the actor the firearm was “cold,” an industry term suggesting the weapon is not loaded with blanks or live ammunition.

Ironically, after a justified police shooting in California, Alec Baldwin once pondered on Twitter what it must feel like to “wrongfully kill someone.” Now, legal experts have suggested that Baldwin could face criminal charges in the shooting, as the executive producer of a film is responsible for on-set security and safety. Attorney Joseph Costa told the New York Post the actor could be charged with something as serious as negligent manslaughter.

If you or a loved one are considering self harm, please contact the National Suicide Prevention Lifeline 24/7 at 800-273-8255.