"She's a vote scammer, a professional vote scammer and hustler," said President Trump in the leaked phone call with Raffensperger.

The Washington Post appeared to deliberately bleep out Trump saying the names of Ruby Freeman and Shaye Moss, the women seen in the viral Georgia security video potentially committing criminal voter fraud, in a leaked call with Georgia Secretary of State Brad Raffensperger.

“We had at least 18 thousand that’s on tape. We had them counted very painstakingly. 18 thousand voters having to do with (bleep). She’s a vote scammer, a professional vote scammer and hustler, (bleep). That was the tape that has been shown all over the world, that makes everybody look bad,” said President Trump.

The President appeared to be referencing the name of Shaye Moss, the woman identified by National File as the supervisor and daughter of vote counter Ruby Freeman. The two women were caught on a security video allegedly counting the same ballots over and over after poll observers were instructed to leave.

Freeman had previously stated on Facebook that “Y’all want to know who my supervisor is over here? It’s my daughter, but I just do what she say do and it’s her show baby, it’s her show.” Freeman also identified her daughter on the November 2 edition of The Atlanta Journal-Constitution, writing that she, as “Supervisor of registration,” was “giving that look to the employees.”

Most importantly, National File was able to track down a New York Times article in which Moss was identified as “Fulton County employee Shaye Moss,” who “scanned mail-in paper ballots at the Georgia World Congress Center during the Georgia primary elections in Atlanta” in June. 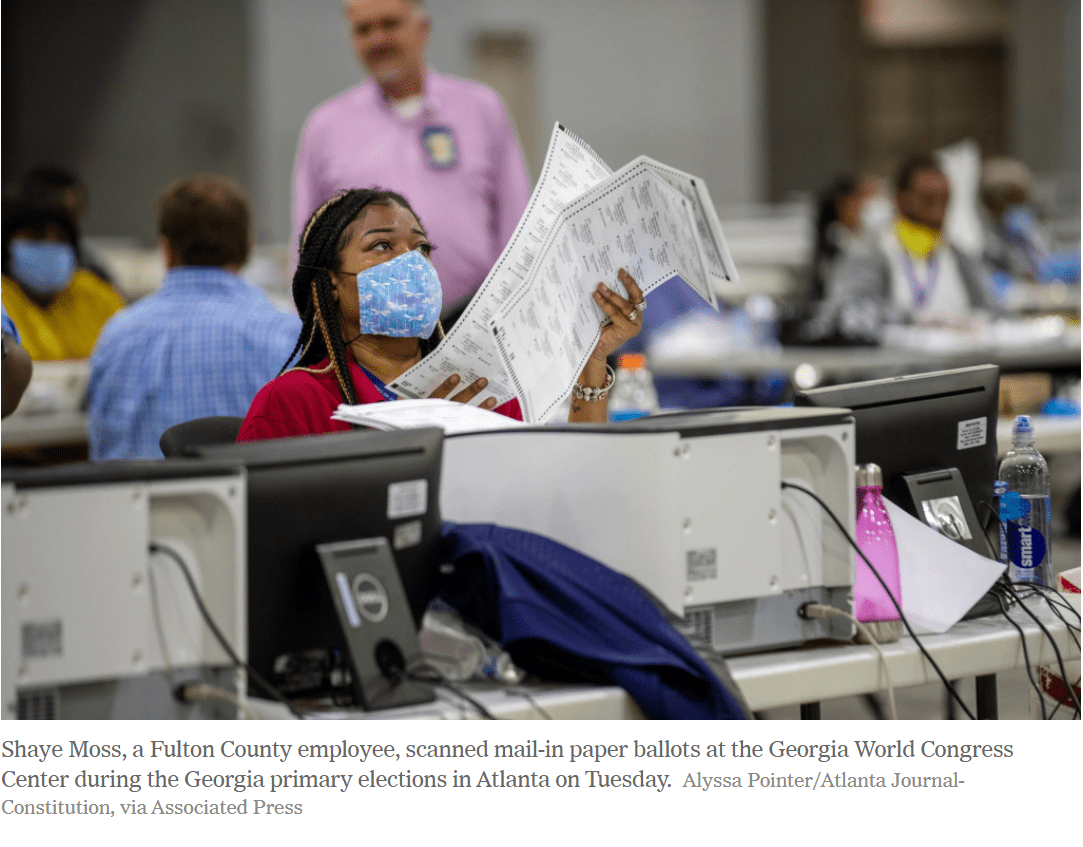 “Everybody fled the area, and then they came back, (bleep) and her daughter, and a few people. There was no Republican poll watchers. Actually, there were no Democrat poll watchers, I guess they were them,” said President Trump. “Early in the morning they went to the table with the black robe, the black shield, and they pulled out the votes. Those votes were put there a number of hours before.”

HERE'S THE EVIDENCE: The Trump legal team in Georgia showed this video of poll workers sending everyone home, then counting votes they concealed in BLACK SUITCASES when nobody was watching. pic.twitter.com/F7nZEJB5Qq

President Trump explained that voters are frustrated over the reluctance of Georgia Governor Brian Kemp and Raffensperger to address the evidence of widespread voter fraud in their state. An example of such evidence could be seen in a damning Facebook Live post by Ruby Freeman, in which she showcases a room full of ballots with no poll watchers in sight, as National File reported.

She then begins to whisper and says “I’m-uh let y’all sit in,” as she flips the camera to show her viewers the entire office room full of boxes of mail-in ballots. “Okay, so that’s what’s going on at Fulton County Voter Registration,” says Freeman. “Sir can I have some work?”

She then sits down at a desk and is given two baskets full of ballots to “work” on by a man which Freeman calls “Dion.” Freeman says “Now I’m back at work, so give me some work.”

At the end of the video Freeman says “Y’all see all this I got here? I got through all this and all these absentee ballots.”

“Why did they run to the bottom of the table? Why did they run there and just open the skirt and rip out the votes? I mean, Brad, and they were sitting there, I think for five hours, or something like that.”

Listen to the full leaked phone call between President Trump and Brad Raffensperger on The Post’s website.