"Y'all want to know who my supervisor is over here? It's my daughter, but I just do what she say do and it's her show baby, it's her show," said Freeman.

After the first vote counter was identified as Ruby Freeman, National File has now identified the person who provided the mysterious suitcases full of votes as Freeman’s daughter.

In an October 26 Facebook live stream, Freeman said “Y’all want to know who my new supervisor is? It’s my daughter.” She added that “I just do what she say do and it’s her show baby, it’s her show.”

Freeman identified her daughter on the November 2 edition of The Atlanta Journal-Constitution, writing that she, as “Supervisor of registration,” was “giving that look to the employees.” She added, “Mommie is so proud of you.” Freeman’s daughter can be seen with long, blonde dreadlocks that are dark at the roots in the photo. 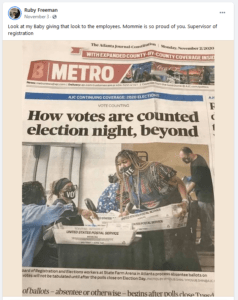 Freeman stated that another election worker had complained about the instructions Freeman gave her at the direction of “a supervisor,” potentially her daughter.

In a November 3 Facebook post, Freeman wrote “A lady had a problem with me telling her what a supervisor told me to tell her yesterday. This morning, lo and behold, out of nowhere, she came to give me a hug. You already know the end of that story. Judas, I’m not Jesus. Don’t play. I blamed it on Social distancing.” 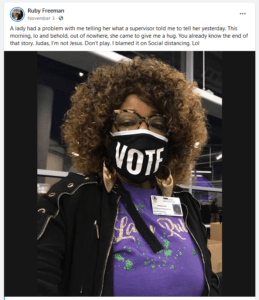 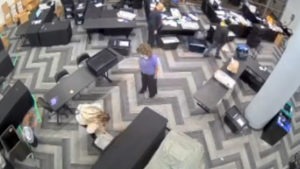 Freeman’s daughter is then seen to be the first person who actually removes the votes from the suitcases. 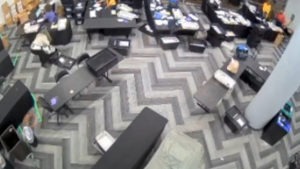 In this image, Freeman’s daughter appears to be issuing instructions to the other vote counters. They begin moving to the suitcases and ballots after she stands in this position and speaks. 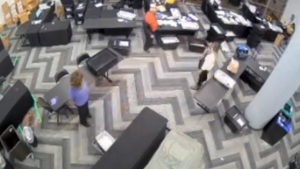 Freeman’s daughter then retrieves a second suitcase full of ballots from underneath the table. Her mother stands nearby watching throughout this clip. 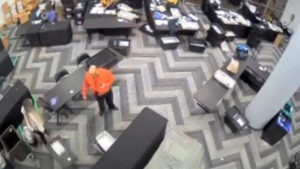 The full sequence of events is publicly available in the video provided by the Trump campaign:

HERE'S THE EVIDENCE: The Trump legal team in Georgia showed this video of poll workers sending everyone home, then counting votes they concealed in BLACK SUITCASES when nobody was watching. pic.twitter.com/F7nZEJB5Qq

In a video that recently surfaced on Twitter, Freeman’s daughter can be seen with green and white spray cans containing an unknown substance. Freeman is seen sitting across from her, wearing blue gloves. The video then zooms in as Freeman hands her daughter what appears to be a USB drive, which Freeman’s daughter conceals as she gets up and walks away.

Ruby Freeman passes what looks to be USB on election night while counting votes. pic.twitter.com/vC9CwrLVky

In another video posted to Twitter, Freeman reveals an office containing boxes of mail-in ballots as she hushes her viewers. She then sits down at a desk and is given the ballots to “work” on by a man which Freeman calls “Dion.” Freeman says “Now I’m back at work, so give me some work.” At the end of the video Freeman says “Y’all see all this I got here? I got through all this and all these absentee ballots.”

Freeman repeatedly made political statements in favor of Joe Biden on her Facebook page. On November 7, Freeman bragged about Biden’s mainstream media-declared victory with a photo of her working during the election that was used by local news. 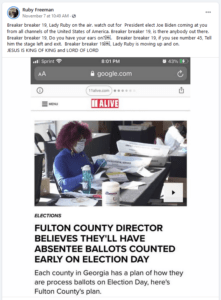 Freeman’s daughter was seen in the local news footage that led to the identification of Freeman.

After the video featuring Freeman and her daughter was revealed by the Trump campaign during Thursday’s Georgia hearing, Secretary of State Brad Raffensperger, a Republican, finally conceded that vote counting was not done legally or with proper supervision.

Raffensperger has stopped short of verifying the signatures of mail-in ballots, despite calls from the Trump campaign, prominent Republicans, and the governor.

Similarly, Gov. Brian Kemp, also a Republican, reaffirmed his call for signature verification. However, Kemp stopped short of calling a special session of the Georgia legislature, which would allow the legislators to fully examine the evidence of voter fraud, and potentially overturn the 2020 presidential election results, and assign the state’s Electoral College votes to President Donald Trump.