The Caldwell Police Department said in a statement that detectives think graffiti was not "motivated by hate" but was carried out as "an act of intimidation."

Idaho police officials believe that a Hispanic gang spray-painted the phrase “White Power” on a local high school in a hate hoax scheme.

The Caldwell Police Department said in a statement that detectives think graffiti was not “motivated by hate” but was carried out as “an act of intimidation.”

“At this time, detectives no longer believe the incident to be motivated by hate but rather an act of intimidation between two rival Hispanic criminal street gangs from Caldwell,” the department said in a Facebook post.

The school’s principal, Anita Wilson, said the school holds a dress code which is strict due to a gang problem in the community. Wilson said the phrase “‘Brown Pride’ is associated with gangs,” according to the Washington Examiner.

The Caldwell Police labeled the act of vandalism a “diversion tactic” carried out by Hispanic gangs in an “attempt to create fear and intimidation within the community.”

The Caldwell Chief of Police Rex Ingram promised “that when we catch the suspects, the public will be able to see who they are because they won’t be able to hide behind a hood or mask in a booking photograph.” 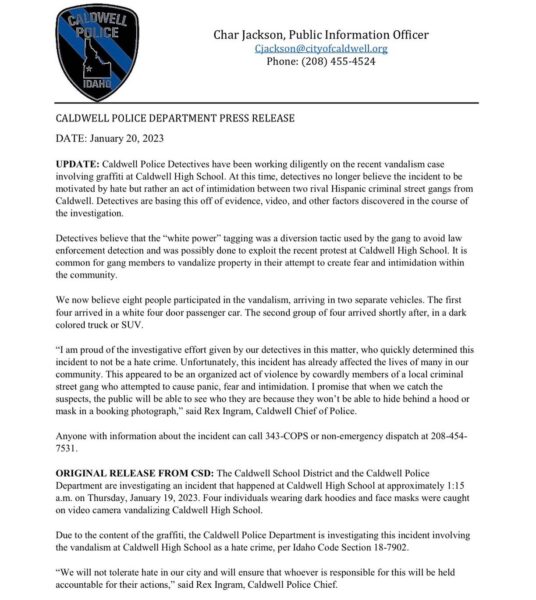