A Russian bombing run destroyed a Ukrainian military base that was housing foreign fighters on Sunday. The International Peacekeeping and Security Center, located near the town of Novoyavorivsk, is just 12 miles from the Polish border and was thought to be housing hundreds of foreign fighters. A Reddit user who joined the legion through the “volunteersForUkraine” subreddit said the base was rendered useless by the bombing run.

According to Ukrainian officials, at least 35 people were killed in the strike while 134 others were injured. The Russian government meanwhile claims to have killed close to 200 foreign fighters in a statement of their own. “The destruction of foreign mercenaries who arrived on the territory of Ukraine will continue,” a representative of the Russian Defense Ministry said in an online statement.

The Ukrainian government has denied reports that foreign fighters were killed in the attack. “There are no casualties among foreign fighters. These are fakes propagated by the Russian government,” regional Governor Maksym Kozytskyy said in a press conference. Kozytskyy later claimed that 22 of 30 rockets fired at the base were intercepted by Ukrainian missile defense systems.

Fighters on the ground have said that foreigners were among those killed in the attack, however. Two German volunteer fighters said many of their fellow foreign legionnaires were killed in the strike. The volunteers, along with the vast majority of remaining foreign fighters, fled Ukraine across the Polish border following the attack. “It was really hard, truly hard,” Peter Füchse, one of the German volunteers, told The Nation. On Tuesday morning, the Daily Mirror reported that three former members of the British special forces were among the dead.

The Reddit user “spindokto”, who claims to have gone to Ukraine after browsing the “VolunteersForUkraine” subreddit, gave a detailed description of the bombing run. The Reddit user claims that 35 Ukrainian troops were killed when a missile struck a building they were in. He later said that the Russian government’s 180 figure was inaccurate, but also said that foreign fighters were among the dead.

The Redditor then said that the situation was hopeless without air power and that the majority of legionaries were leaving the country. “If you think I’m a Russian agent you’re just in denial that the situation is absolutely fu****,” the Redditor said. “Go ahead and join the legion, by all means, but be very aware of how bad Kyiv is going to get and be aware that Russians have warplanes and you will have next to nothing.”

He went on to say that the bulk of remaining fighters were taking their last chance to flee across the polish border, corroborating other reports. The Redditor said that former special forces members among the legion were saying the same thing and leaving the country themselves. “Be very acceptant of the possibility of death. Those of us who left, including SF operators from multiple countries, are simply risk mitigating,” the Reddit user continued. He went on to say that those who stayed were bombed again on Monday and that casualty reports are unclear. 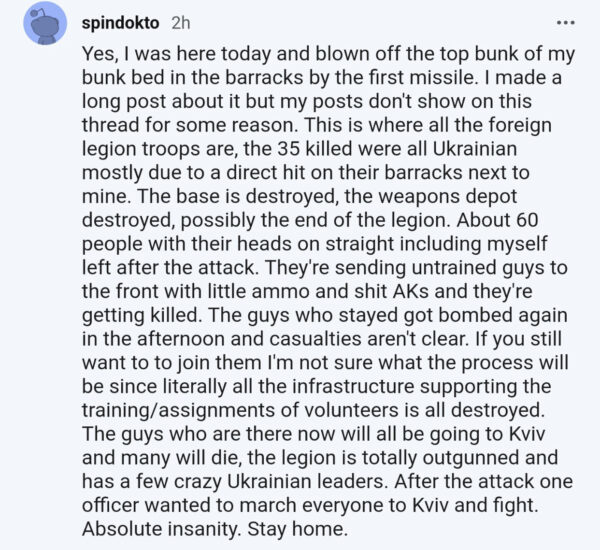 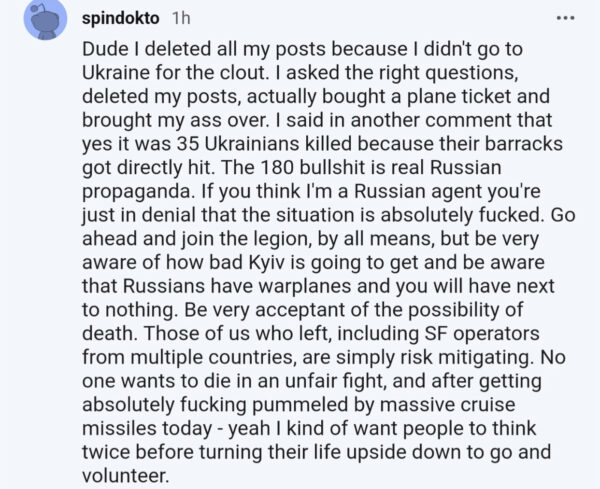 The U.S. State Department has told Americans not to travel to the country in order to fight on behalf of the Ukranian Government.