by Cullen McCue
in 2022, Economy, Politics

As gas prices continue to soar past record highs, Democrats and the Biden White House are attempting to pin the blame solely on Vladimir Putin. One Democrat Congresswoman even said it is “frankly un-American” to blame surging fuel costs on President Biden.

During an interview on Monday, Democratic Rep. Kim Schrier (D-WA) told “unDivided” podcast host Brandi Kruse that Putin should be exclusively blamed for skyrocketing gas prices. “What do you believe?” Kruse asked Schrier after highlighting the debate over who is to blame. “I believe a couple of things,” Schrier replied. “Right now, in the last two weeks, this is Putin. You should be blaming Putin, if anyone for this.”
“To not blame Putin, first of all, is denying reality, and second, frankly, I think is un-American,” the Democrat added. “So this is Putin’s fault.”

U.S. @RepKimSchrier (D-WA) says it is "frankly un-American" to blame record gas prices on anyone but Putin: https://t.co/xZUhHyeCIh #unDivided pic.twitter.com/RnG6FrL2k6

While gas prices have certainly spiked as a result of the conflict in Ukraine and subsequent bans on Russian oil, the average cost of a gallon of gasoline had already increased significantly over the last year. From November 2021 through February 2022, the national average spiked close to $1.50 per gallon. Prices then spiked another 30% or so since the conflict began, pushing gas prices well past record highs. 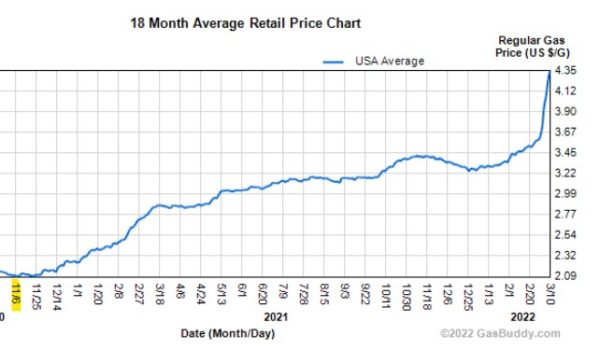 Schrier addressed this and blamed the previous year’s skyrocketing costs on “supply and demand” and the COVID-19 pandemic. “People were already suffering at the gas pump before this,” Schrier said. “We saw an increase of over a dollar per gallon over the last year and a half or so. That can be blamed realistically on the pandemic.”
“When people were not going to work and driving was down, gas prices were down,” the Democrat continued. “As demand increased and rigs had not yet been turned on, there was a supply-demand issue like with everything else in this country and that [the pandemic] was to blame.”
Schrier’s attempt to pin the blame solely on Putin has become a common talking point among Democrats in recent days. The Biden White House “briefed” a group of Tik Tok influencers on the conflict last week, who then took to the platform to blame Putin for the sky-rocketing costs. Under Biden, gas prices have risen 59% — prior to Russia’s invasion of Ukraine — with the nationwide average hovering just over $4.30, according to a new AAA report.