“I generally ignore the President-elect’s tweets, but not this one,” Reinhart said in a Facebook post just one day before Trump took office. The judge was speaking in reference The magistrate is likely referencing a tweet from Trump where he blasted then-U.S. Rep John Lewis (D-GA) for having a “falling apart” district.

“Congressman John Lewis should spend more time on fixing and helping his district, which is in horrible shape and falling apart (not to mention crime infested) rather than falsely complaining about the election results. All talk, talk, talk – no action or results. Sad!” then-President-Elect Trump wrote in a tweet.

Reinhart also praised Robert Reich — a far-left anti-Trump activist with a large Twitter following — for defending Lewis against Trump’s insults. “Thank you, Robert Reich, for saying what many of us feel, ‘John Lewis is the conscience of America. Donald Trump doesn’t have the moral stature to kiss John Lewis’s feet.’” 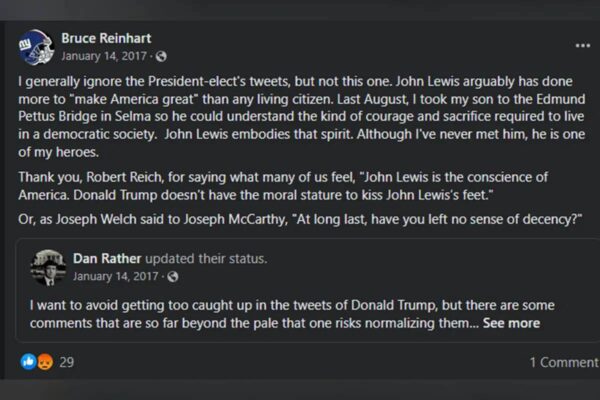 Judge Reinhart appears to have a Twitter account, @BruceEReinahart, but the page has been set to private.  In addition, the U.S. Southern District of Florida revoked the public’s access to view Reinhart’s “about” profile on a government website.

As National File previously reported, Judge Bruce Reinhart represented a number of high-profile associates of Jeffrey Epstein during his days as an attorney.  This includes Epstein’s pilots; his scheduler, Sarah Kellen; and Nadia Marcinkova, who Epstein once reportedly described as his “Yugoslavian sex slave.”

Reinhart previously worked as a U.S. attorney, but on New Year’s Day in 2008, he resigned and went on to represent Epstein’s associates just a day later.