“The petition for certiorari is granted, the judgement is vacated, and the case is remanded to the Court of Appeals for reconsideration in light of Sons of Confederate Veterans v. Henry County Board of Commissioners,” The Supreme Court stated on Tuesday.

Attorney and founder of VoterGA, Garland Favorito, spoke with The National File on Thursday.

“This was the case where we had four sworn affidavits from senior poll managers who claimed that they handled counterfeit ballots in the Fulton County audit,” Favorito said on Thursday.

“We got an order to inspect the ballots and suddenly Fulton County went out and hired criminal defense attorneys to keep us from seeing the ballots,” Favorito said. “That tells you a lot, doesn’t it?”

“I think this decision will have national implications,” Favorito stated.

The following order was passed: 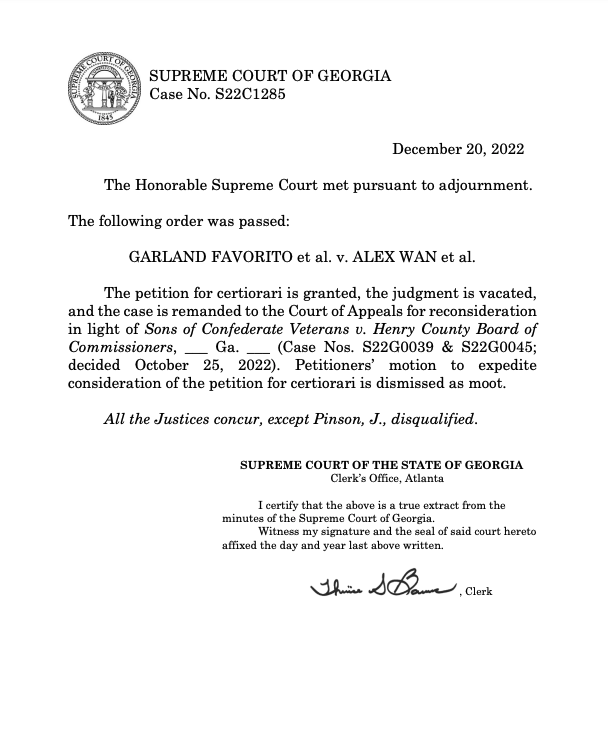 The case will now head to the Georgia Court of Appeals where they will defer to the ruling made by the Georgia Supreme Court on Tuesday. 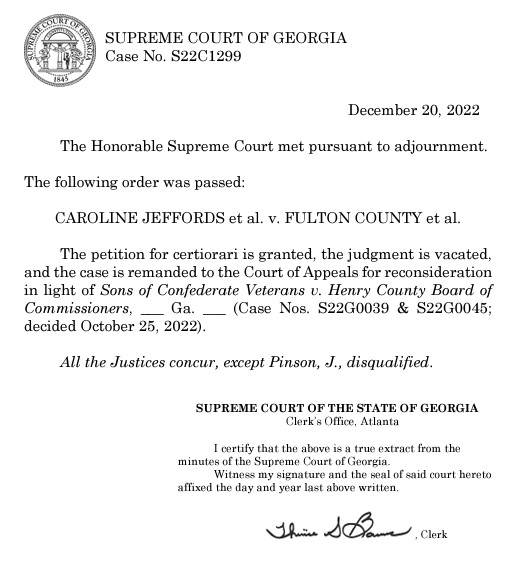 “All the Justices concur, except Pinson, J., disqualified,” the Court said.

Justice Andrew Pinson is the youngest justice on the Supreme Court of Georgia, and was disqualified because he was on the Court of Appeals when it made its initial decision on the case.

“It absolutely is real, Steve. It’s not just that they stole the election. They stole our [legal] standing. I’ve been saying ever since this case was dismissed that we actually did have standing and even our good friends like John Fredericks and others didn’t really believe that it was correct,” Favorito said on Thursday.

“We’ve got to give a tip of the hat to our attorney, Todd Hardy, and he made this argument. The argument is we do have standing. There are different arguments that could have been made. There are arguments [wherein] we don’t even need to have standing, but that argument carried the day. This is a real decision. We knew that it was coming. Todd has been telling us to watch this Sons of Confederate Veterans case for over a year. And just about a month ago, the Georgia Supreme Court ruled, in fact, that individuals do have standing,” Favorito said.

“This was a case of Confederate memorials that Henry County and Newton County were trying to take down illegally, because all monuments and memorials are protected in the State of Georgia, whether you like them or not. And once the court ruled on that case they said that citizens, residents, and taxpayers have always had standing in Georgia, which is exactly what I’ve been saying for over a year. It was an egregious decision originally that violated all the United States Supreme Court precedents and the precedents in the State of Georgia since the state first existed in 1788,” he added.

“Practically, the first step is it’s going to have to go back to the Georgia Court of Appeals. The Georgia Court of Appeals will then tell the court they have to abide by the Supreme Court decision and then it will go back to Judge Amero and Judge Amero will be forced to open up discovery on the case. This is the only way he could have gotten rid of discovery in the case. But now he will be forced to open discovery and once we open discovery, the first thing we’re going to do is go after the ballots,” Favorito said.

“We will get to see those ballots. I think we’ll get to do what we actually wanted to do all along.”