Now THIS Is The Way To Answer A Subpoena

by Patrick Howley
in Opinion, The Hill

America First host Nick Fuentes dunked on establishment congressman Adam Kinzinger and the rest of the so-called “Select Committee To Investigate the January 6th Attack on the U.S. Capitol” when Fuentes pleaded the Fifth Amendment to most of the questions in his recent deposition. Fuentes protested for election integrity as part of the “Stop the Steal” movement, which tried to prevent Democrats and establishment RINO’s from stealing the 2020 election from President Donald Trump. Fuentes stonewalled the Committee except on basic introductory details regarding his life and residence.

Adam Kinzinger, the disgraced outgoing Illinois Republican Congressman who has been agitating against the America First movement, actually attended the video deposition. Kinzinger is leaving Congress due to lack of popular support for his anti-Donald Trump, pro-establishment views. Kinzinger did not get the opportunity to try to damage Fuentes, because Fuentes came armed with a valuable weapon of self-preservation: the Fifth Amendment to the Constitution of the United States, which allows Americans to avoid self-incrimination. 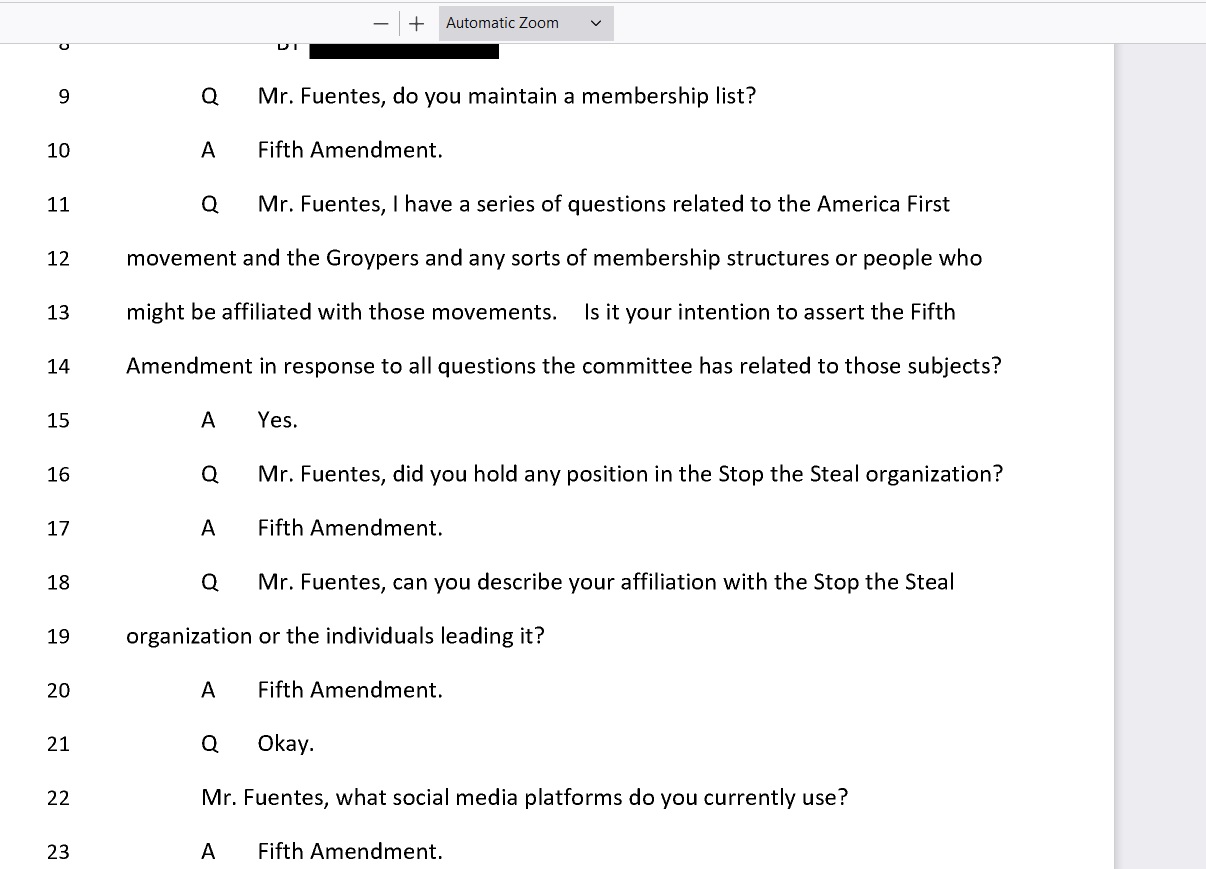 Nick Fuentes, the proprietor of the Cozy streaming service and leader of the Groypers, is building a movement largely comprised of politically incorrect anti-establishment young men who reject Zionist supremacy, feminist badgering and anti-White racism in American society. Fuentes gained national prominence during the “Groyper Wars,” in which his followers confronted conservative pundit Charlie Kirk about Kirk’s advocacy for stapling green cards to foreigners’ diplomas. The GOP and the professional conservative movement largely push for mass “legal” immigration, which dilutes and dis-empowers the native-born American population.

As Patrick Howley famously reported for NATIONAL FILE in 2021: Republican Illinois Rep. Adam Kinzinger’s office offered an internship to a Russian immigrant beauty queen who met Kinzinger through her internship application. She then dated Kinzinger for about four months and sent Kinzinger racy photos at his request, according to extensive communications between the woman and a NATIONAL FILE source. The woman, Olga Kambod, provided sexually charged and volatile 2018 text messages between herself and a phone number that matches Kinzinger’s former phone number on publicly available records. Kambod also provided emails from Kinzinger’s congressional staff discussing internship duties.

Rep. Adam Kinzinger, a frequent critic of the America First movement, became angry at Olga Kambod after she accused him of suffering from “low levels of testosterone,” according to messages Kambod provided to our source. Kambod did not end up serving as an intern for Kinzinger. Olga Kambod was subjected to an over-the-phone intimidation campaign including from a caller who identified himself as “Capitol Police” to silence her about her relationship with the congressman after Kinzinger began dating his current wife, according to Kambod.  “In my opinion he doesn’t respect women,” Olga Kambod confided to our source. “I don’t think that his district will be proud of him if they know that he is abusing his power and using police for improper purpose such as personal retaliation.”

Olga Kambod, who reportedly graduated from law school and worked for a criminal defense attorney, was recently in the news for surviving an acid attack that left permanent scarring on one side of her face. Olga Kambod, who has a public Facebook page and also a personal Facebook profile on which she posts as “Olga Alexia,” provided extensive information and documentation to NATIONAL FILE’s source to verify her identity…”