Spending Bill Funnels Over $300 Million Related To A Future Flu Pandemic, Including For ‘Surveillance Tools’

Spending Bill Funnels Over $300 Million Related To A Future Flu Pandemic, Including For ‘Surveillance Tools’

What are They plotting?

by Patrick Howley
in News, Politics, The Hill, The Swamp

The $1.7 trillion U.S. government spending bill, which passed the House and Senate and is expected to be signed into law by disputed political figure Joe Biden, contains $335 million in spending “to prepare for or respond to an influenza pandemic,” as revealed by Congressman Dan Bishop (R-NC). The massive spending on pandemic related infrastructure has not sat well with a number of Americans, considering the continued impacts Coronavirus pandemic and associated “Great Reset,” agenda, which has led to a corrosion of human freedoms.

The Coronavirus vaccine is under increasing scrutiny for causing blood clots, a fact that has finally been admitted by the FDA. The vaccines have also been linked to myocarditis, and other ailments, earning it the colloquial moniker “the clot shot.”

According to the spending bill, “$300,000,000 shall be available until expended, for activities including the development and purchase of vaccine, antivirals, necessary medical supplies, diagnostics, and other surveillance tools…”

What does the government plan to do with these “surveillance tools?”

As NATIONAL FILE famously reported, Dr. Anthony Fauci’s NIAID funded the bat coronavirus project at the Wuhan Institute of Virology, which is now identified as the source of the Coronavirus outbreak.

Bill Gates’ foundation recently teamed up with the WHO and Johns Hopkins to play-act a pandemic planning exercise called the “Catastrophic Contagion” exercise, which fictionally predicted a pandemic that could kill nearly 15 million children. 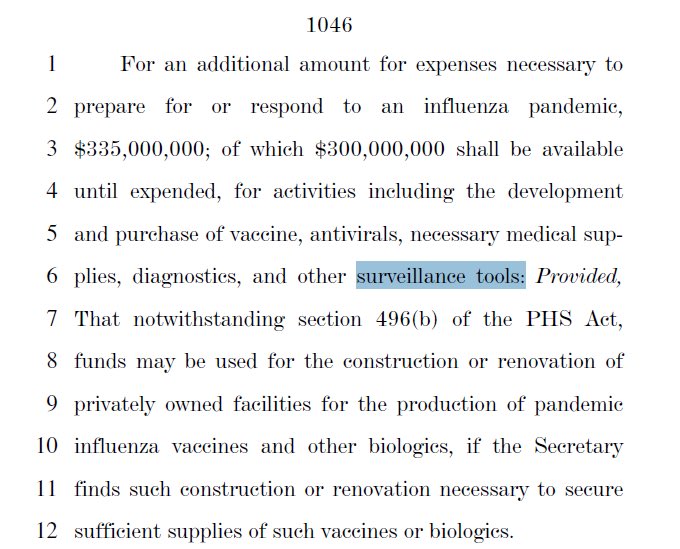 The Hollywood product Utopia starring John Cusack featured a revelatory scene that might get to the heart of the globalists’ ambitions:

The bill will also name a federal building after Nancy Pelosi, $524.4 million for a DEI and “structural racism” National Institute of Health subdivision and the explicit prohibition of funds going to the Customs and Border Patrol “to acquire, maintain or extend border security technology and capabilities,” Fox News reported.