"It would look weird to add you as a coauthor now"

An email chain show that Anthony Fauci was asked to coauthor a scientific paper by Peter Daszak which dismissed the “lab leak” theory of the origin of COVID-19.

Peter Daszak, the man behind the EcoHealth Alliance, was behind research into coronaviruses at the Wuhan Institute of Virology in China, and helped funnel money from Anthony Fauci’s National Institute for Allergy and Infectious Diseases (NIAID) towards their research, as National File reported. In fact, Daszak has been very open with the research conducted at said labroratory, which has been suggested as a potential source for the COVID-19 outbreak.

National File reported this week on the emergence of a video from Daszak from December 2019, where he boasts about manipulating coronaviruses in the lab. “Coronaviruses are pretty good… you can manipulate them in the lab pretty easily,” Daszak said in the interview posted to YouTube. “The spiked proteins drive a lot about what happens. You can get the sequence you can build the protein, we work with Ralph Baric at UNC to do this, insert into the backbone of another virus and do some work in a lab.”

Yet despite this open admittance into the manipulation of coronaviruses, Daszak has been one of the loudest voices against the “lab-leak” theory, dismissing it as a “conspiracy theory,” and organising multiple actions trying to shut it down. In February 2020, he was behind a letter from multiple scientists rubbishing the theory, and only one week later, coauthored a paper from the NEJM which stated that “scientists tell us that SARS-CoV-2 did not escape from a jar,” contrasting the outbreak to the Greek myth of Pandora’s Box.

This paper, in fact, shows further ties between Daszak and Fauci. Recently published emails show that Fauci, in fact, was given access to the paper beforehand, and even asked if he wanted to coauthor the paper.

2/ That was the first public effort to use a big scientific journal to steer attention from the lab. A week later, Daszak did so again, with an @NEJM paper insisting the virus had to be natural.

Guess who saw the paper in advance and was asked to coauthor it?

The first part of the email from Greg Folkers, Fauci’s Chief of Staff at the NIAID, is redacted, but likely contains some discussion regarding the upcoming paper. “So the question to you – do you want to be a part of this? ie [sic] be a coauthor,” Folkers asks Fauci. “I would vote no – it wud [sic] look weird to add you as a coauthor now. Plus, plate too full,” he continues. “I agree,” Fauci curtly replied. “I will not be a co-author.” 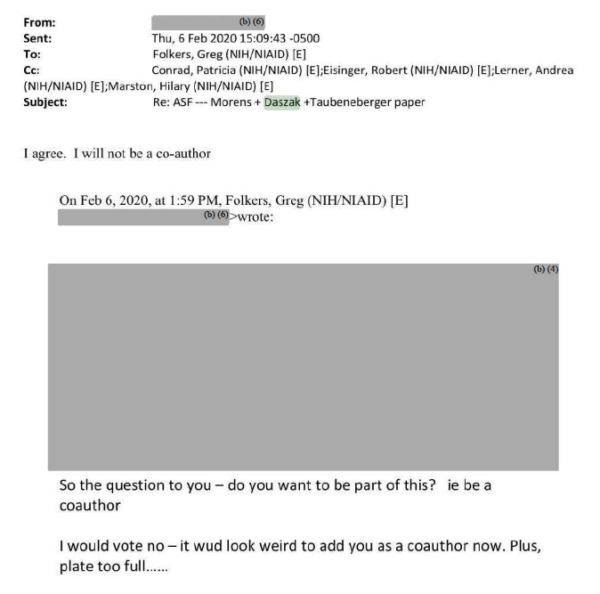 As National File reported, Daszak had praised Fauci for dismissing the lab leak theory, despite further emails showing that he was initially concerned about such an event having occurred:

“As the PI of the R01 grant publicly targeted by Fox News reporters at the Presidential press briefing last night, I just wanted to say a personal thankyou [sic] on behalf of our staff and collaborators, for publicly standing up and stating that the scientific evidence supports a natural origin for COVID-19 from a bat-to-human spillover, not a lab release from the Wuhan Institute of Virology,” Daszak said. “From my perspective, your comments are brave, and coming from your trusted voice, will help dispel the myths being spun around the virus’ origins,” he continued, expressing his wish to thank Fauci in person.

Only a few months after that email, Fauci helped restore funding to Daszak’s EcoHealth Alliance, which President Trump’s administration had cut off over fears that the organisation had indulged in the potentially deadly “gain of function” experiments that led to the COVID-19 outbreak.

Despite the treasure trove of thousands of emails from Fauci being legally obtained from Freedom of Information Act requests, Big Tech has worked to shut down access to these emails from the general public. The Informed Consent Action Network was locked out of their Twitter account twice in 24 hours after they publicized that they had acquired 2,957 emails sent from Anthony Fauci between February and May of last year. Following National File’s reporting, their account and two tweets were restored, with Twitter claiming that they had done so “in error.”