Last April, reports emerged that the EcoHealth Alliance, an organization run by one Peter Daszak, was involved in funding and collaborating with the Wuhan Institute of Virology, where researchers were examining coronaviruses extremely similar to the one behind the COVID-19 outbreak, and allegedly engaging in “gain of function” research relating to them. In an April 17th press conference, President Trump confirmed that a grant worth around $3.7 million since 2015 given to Daszak’s group by the National Institute for Health would be ended “very quickly” following the reports.

Only one week later on April 24th, all future funding for the EHA was cut, and they were ordered to stop spending the $369,819 remaining from its 2020 grant. “At this time, NIH does not believe that the current project outcomes align with the program goals and agency priorities,” Michael Lauer, the agency’s deputy director for extramural research, wrote in a letter to EcoHealth Alliance officials.

From within the treasure trove of 3,200 pages of emails obtained from Anthony Fauci, one email can be found from Daszak, who thanked Fauci for dismissing the lab leak theory as being simply conspiratorial the day after President Trump announced the funding would be cut.

“As the PI of the R01 grant publicly targeted by Fox News reporters at the Presidential press briefing last night, I just wanted to say a personal thankyou [sic] on behalf of our staff and collaborators, for publicly standing up and stating that the scientific evidence supports a natural origin for COVID-19 from a bat-to-human spillover, not a lab release from the Wuhan Institute of Virology,” Daszak said. “From my perspective, your comments are brave, and coming from your trusted voice, will help dispel the myths being spun around the virus’ origins,” he continued, expressing his wish to thank Fauci in person. (READ MORE: Tucker Carlson Says Fauci’s Emails Merit ‘Criminal Investigation’, He May Have Committed ‘Perjury’ In Confrontation With Rand Paul) 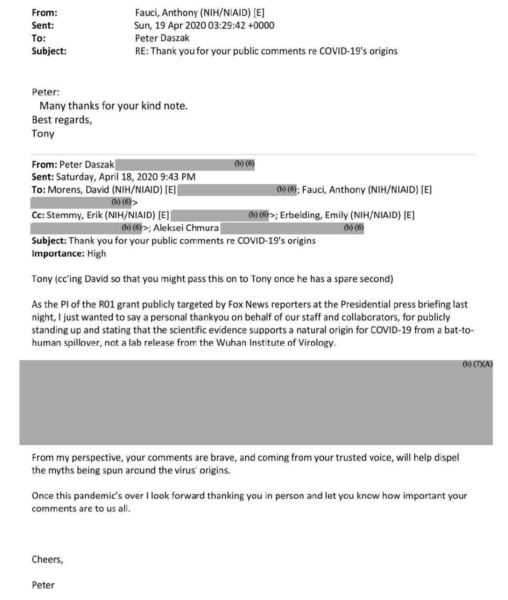 Only a few months later in August, Fauci, who along with being put in charge of America’s response to COVID-19, is the director of the National Institute of Allergies and Infectious Diseases, which is part of the NIH, helped confirm that Daszak’s organization would receive a new grant of $7.5 million to study coronaviruses as part of a new network.

The CREID network, which contains 11 institutions including the EHA, “coincidentally” will continue to study the emergence of coronaviruses in Southeast Asia. Fauci said that the network will help “enable early warnings of emerging diseases wherever they occur, which will be critical to rapid responses,” while Daszak boasted that they will be working in rural hospitals, according to a statement, “in remote parts of Malaysia and Thailand to get to the front line of where the next pandemic is going to start.”

Questions will be raised as to why Fauci and the NIH reauthorised the grant to Daszak and his organization despite President Trump’s clear opposition to the funding. In a statement on Thursday, President Trump said that he was astonished at the time to hear about the funding of the Wuhan Institute, and said Fauci had a “lot of questions” to answer, especially regarding the alleged “gain of function” research.