"This has gone from ridiculous to insane"

Twitter has locked ICAN out of their account for the second time in 24 hours after they publicized their newly released dump of emails from Anthony Fauci.

National File reported on Thursday that the Informed Consent Action Network (ICAN) was locked out of their Twitter account for 12 hours, after they publicized that they had acquired 2,957 pages of emails sent from Anthony Fauci between February and May of last year. The Big Tech platform locked the organization dedicated to increasing informed consent regarding vaccinations out of their account due to alleged violations of their misinformation policy regarding COVID-19, despite the fact that their tweet seemingly did not break any of the rules under that specific regulation.

My friends at @ICANdecide were suspended by Twitter today for reporting that they have 3,000 additional pages of Fauci's emails they obtained thru FOIA! They'll be posting at https://t.co/2FAmuN6pfZ tonight. Spread the word & help crowdsource review of the emails! pic.twitter.com/BMoNMjMNUv

Speaking exclusively to National File, Del Bigtree, the founder of ICAN, said it was “ironic” that Twitter shut down their account, given the emails that were to be published were obtained using the Freedom of Information Act, a piece of legislation designed to allow the public access to otherwise hidden government information:

They all seem to allude to anything that goes against WHO statements or guidelines or the CDC will be censored. I think that number one, the WHO is not an American agency, and so I find that very troubling that we have Americans and American company that is referring to an international or foreign body for how we communicate in this country, I think, is a very dangerous precedent.. We’re being told now that questioning a government agency is illegal or misinformation or dangeorus information. That’s exactly the point of journalism, especially in the United States of America, our Founding Fathers referred to the news or the media as the fourth estate, or the fourth branch of government.

Thomas Jefferson, John Adams, they all wrote about the importance of journalists being completely free and to never shy away from asking the hard questions of government agencies, of industries… I don’t think anyone’s under the impression that our government is run by total immaculate, moral beings, and so to have the criteria be, you’ve got to be in agreement with our government, goes against everything that our Constitution in the United States of America and our Bill of Rights is all about, especially when it comes to free speech.

After serving their initial 12 hour suspension, ICAN published their treasure trove of emails from Fauci to their site, which while overlapping with some of the initial dump provided by Buzzfeed and the Washington Post, also included new information that had not been previously released. However, after promoting the newly released documents, ICAN was shut down again by Twitter. Bigtree said that this has now gone from “ridiculous to insane”:

I think the only people this is truly going to hurt is Twitter itself and its credibility for those of us who once believed it was a communication tool, it’s now obviously is a propaganda tool that only has its own agenda or the agenda of Tony Fauci at the center of this discussion in mind.

It’s impossible to imagine what the strategy is, but when you look at the final line in the latest suspension, it basically lays out that multiple infractions will lead to the total removal of our Twitter page, and that apparently is the goal that they seek to achieve by censoring information that is supposed to be by law available to the public. It’s why the FOIA exists, and now Twitter is going to violate that ability for the citizens of America to see that information. It’s a sad day for social media and it’s a sad day for journalism. 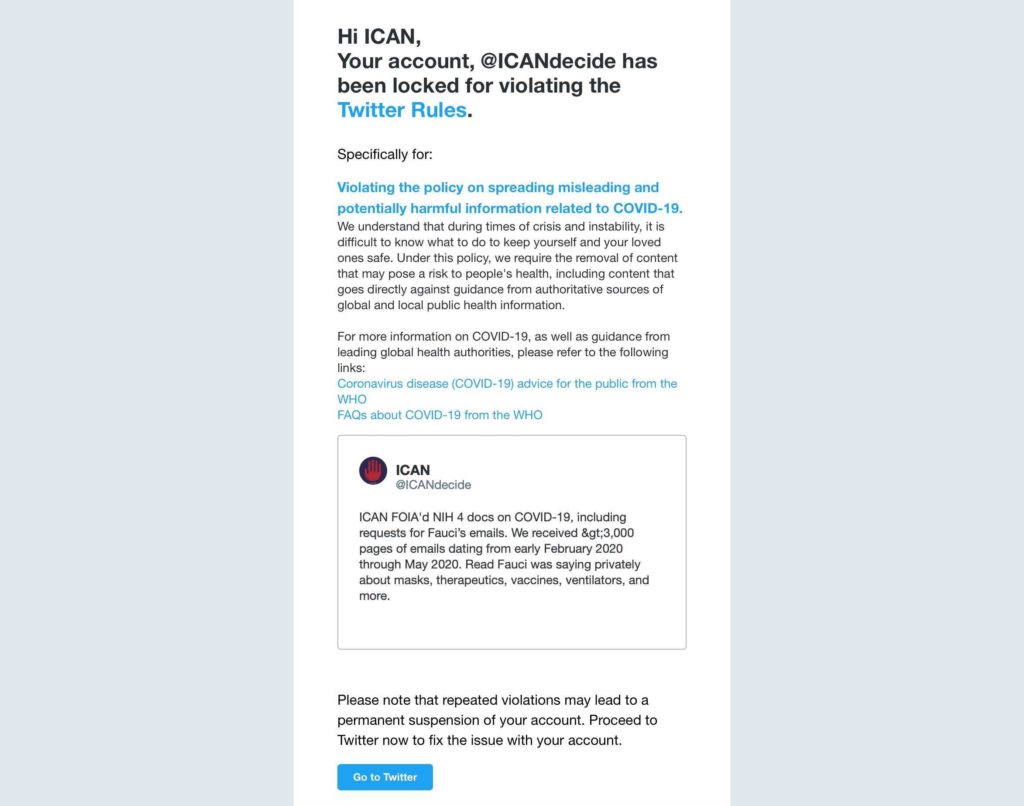 One big revelation Bigtree informed National File was that the emails that had been released so far is only approximately “one third of the total document dump” that is supposed to be coming their way, and that they should continue to receive “roughly 500” new pages of emails every two to three weeks that they will immediately release to the world for citizen journalists to comb through.

Obviously any discission about gain of function or about the origins of this virus is useful, what we’ve always been focused on is the knowledge of treatments. We believe that there’s something really wrong with the fact that Tony Fauci was so dismissive of any discussion of treatments, saying from the beginning the only way out was going to be vaccines. As we receive them now, we will be presenting them to our audience… and then immediately after, to the public and then the press.

In an email, a spokesperson for Twitter confirmed to National File that the Big Tech platform was looking into ICAN’s initial 12 hour suspension from the platform for discussing the content of Fauci’s emails. National File did not receive a comment by the time of publication regarding the second suspension of ICAN.

National File has reported extensively on the contents of Fauci’s emails from the initial document dump. One email chain from February of 2020 show that Fauci was not concerned with the new variant of COVID-19, and believed that it would be only as mild as the previous swine flu pandemic from 2009. In another email from the same month, Fauci said that “most transmissions” of virus “occur from someone who is symptomatic” and “not asymptomatic.” However, Fauci publicly touted the idea that asymptomatic spread is “not rare” but in fact common, as the medical experts spread fear about the virus.

Yet another email exchange from Fauci shows him promising to pressure then-President Trump to intimidate Florida Governor Ron DeSantis into closing gyms, bars and beaches. Fauci and another physician raged at citizens exercising their individual liberty, with Fauci saying that he screamed during television interviews “2 to 5 times per night” when he saw young people having fun.