Pharmaceutical giant Pfizer, Inc. has repeatedly refused to confirm whether it has shipped any of the Comirnaty vaccine to the United States. In some cases, vaccine mandates require an FDA-approved vaccine to be administered, prompting further potential legal hurdles for the White House’s vaccine agenda.

Earlier today The Ohio Star exclusively reported that one of the state’s largest hospital systems is not distributing the Food and Drug Administration (FDA) approved Pfizer vaccine, labeled as Comirnaty, but is instead distributing the previous labeled versions of the vaccine that are only approved for emergency use via an Emergency Use Authorization (EUA).

Pfizer refused to tell reporter Peter D’Abrosca whether Comirnaty was being shipped to Ohio.

Meanwhile, the FDA has conceded that Comirnaty and the two versions of the Pfizer vaccine given emergency use authorization are “legally distinct.”

National File contacted Pfizer to ascertain whether vials of Comirtnaty where being distributed anywhere inside the United States or any of its territories.

Pfizer did not respond to our question, but the big pharmaceutical company’s response seemed to suggest that it is presently unavailable.

“The Pfizer-BioNTech COVID-19 EUA labeled product will still be shipped and usable until its expiry date,” a Pfizer spokesperson told National File.

National File contacted Pfizer a second time to offer them to opportunity to clarify whether Comirtnaty is available within the United States or any of its territories.

The pharmaceutical giant did not respond when given nearly three hours to provide comment.

We will update this article if Pfizer clarifies whether Comirnaty has been shipped to any destination within the United States or its territories.

In the company’s first response to National File, its spokesperson also attempted to clarify the FDA’s statement that the Comirnaty vaccine is “legally distinct” from the EUA vaccines:

“The statement that the products are “legally distinct with certain differences” refers to the differences in manufacturing information included in the respective regulatory submissions. Specifically,

According to FDA’s statement to The Ohio Star, the pharmaceutical company’s definition of “legally distinct” may also be imperfect (emphasis added by National File):

“The statutory authorities governing BLAs and EUAs are distinct and provide different legal requirements. The vaccine distributed pursuant to the BLA approval is subject to the requirements of the BLA under section 351 of the Public Health Service Act, while the EUA vaccine is subject to the requirements of the EUA issued pursuant to section 564 of the FD&C Act.  For example, EUA Fact Sheets must be provided for the EUA product but not for the approved BLA product.

The FDA-approved Comirnaty (COVID-19 Vaccine, mRNA) and the two EUA authorized formulations of Pfizer-BioNTech COVID-19 Vaccine for ages 12 years and older, when prepared according to their respective instructions for use, can be used interchangeably without presenting any safety or effectiveness concerns. For purposes of administration, doses distributed under the EUA are interchangeable with the licensed doses. The Vaccine Information Fact Sheet for Recipients and Caregivers provides additional information about both the approved and authorized vaccines.

While the vaccines may not be fundamentally different in their contents, the FDA makes it clear that the vaccines are “legally distinct” due to potential differences in manufacturing environments, and the laws with which they were approved for use.

In its statement to D’Abrosca, the FDA seemed to suggest that – medically – the vaccines are interchangeable and will provide the same benefits or adverse effects, though the law may not agree.

As The Ohio Star noted, “Military members were also required to take the COVID-19 vaccine based on the premise that it had been fully approved by the FDA.”

This was referenced in a lawsuit against the Department of Defense filed by multiple military members.

Ultimately, the judge appeared sympathetic to the plaintiffs, but threw the lawsuit out because it was filed anonymously due to fear for reprisal.

As The Ohio Star reported:

“In a 32-page ruling handed down on Nov. 12, Federal Judge Allen Winsor of the United States District Court for the District of Northern Florida noted that “Pfizer continues to produce vials of vaccine that are labeled as an EUA drug with packaging material saying, ‘This product has not been approved or licensed by the FDA…’”

“In short, what people think of as the Pfizer vaccine has two distinct FDA approval statuses,” Winsor wrote. “It is licensed—that is, fully approved—for the two-dose application in those 16 and older. But it is unlicensed and operating under an EUA— that is, an emergency use authorization—for other applications, like for children under 16 and for certain third shots. Nonetheless, the FDA describes the two as the ‘same formulation’ and ‘interchangeabl[e]’ for medical purposes.”

Later in the ruling, Winsor wrote that the DOD provided no evidence that Pfizer was actually distributing Comirnaty instead of the original EUA vaccine.”

Similarly, Republican Ohio Gov. Mike DeWine signed legislation that prohibits “a public school or state institution of higher education shall not . . . Require an individual to receive a vaccine for which the United States food and drug administration has not granted full approval.”

In October of this year, under cover videos showing Pfizer scientist Nick Karl admit that the vaccines are less effective than natural COVID-19 antibodies surfaced.

When Karl was confronted by Project Veritas journalists, he physically fled the building.

In other Project Veritas videos, one scientist described Pfizer as an “evil corporation,” even as Karl openly endorsed vaccine passports and severe restrictions on the unvaccinated to motivate them to consent to his company’s product.

“Basically our organization is run on COVID money now,” said Chris Croce, a Senior Associate Scientist for Pfizer. “You don’t talk about anything that can possibly implicate you or, like, Big Pharma. Even if you shut the door to the office it’s like, who is listening?”

Earlier this month, The Guardian criticized the “wall of secrecy” created by Pfizer’s “secrecy clause” in its deal with the United Kingdom.

“The revelation comes as Pfizer is accused by a former senior US health official of ‘war profiteering’ during the pandemic,” the newspaper noted.

“In a Channel 4 Dispatches investigation to be broadcast this week, Tom Frieden, who was director of the US Centers for Disease Control and Prevention under Barack Obama, said: ‘If you’re just focusing on maximising your profits and you’re a vaccine manufacturer … you are war profiteering.'”

FDA Has Major Ties To Pfizer

At least six of the FDA committee members who made the decision to make the Pfizer vaccine available for children have worked for Pfizer, had research funded by Pfizer, or are otherwise connected to the company.

The Acting Chair of the committee was a paid Pfizer consultant as recently as 2018, another worked on a Pfizer-sponsored research project related to vaccines for infants, a third mentored Pfizer’s Senior Director of Vaccine Research, a fourth is listed on a committee sponsored by Pfizer, a fifth openly previously served as a Vice President for Pfizer Vaccines, and a sixth proudly photographed himself receiving the Pfizer vaccine. 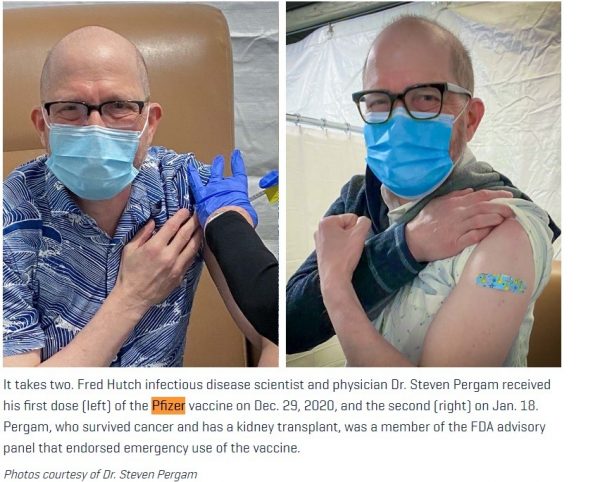 Tom Pappert
Tom Pappert is the editor-in-chief of National File. Follow him on Twitter @realTomPappert, or follow Tom Pappert on Gab. Tips can be sent securely to [email protected].
BREAKING: Al-Qaeda Terrorist's Brother Allegedly Takes Hostages at Texas Synagogue, Demands Her Release
Four Years Later, Republicans Pay the Price for Ignoring the Deplatforming of Laura Loomer
'It's About Election Subversion': Biden Admits 'We Missed' Filibuster, Won't Stop 'As Long as I Have a Breath in Me'
EXCLUSIVE: Stewart Rhodes Arrested For 'Seditious Conspiracy' While On Phone With Lawyer
VIDEO: Biden Demands Big Tech Censor Those Who Question Regime's COVID Narrative
See more...
Advertisement

Former President Donald Trump issued a statement celebrating the Supreme Court's recent shutdown of Joe Biden's unconstitutional OSHA Covid jab mandates despite being a staunch advocate of the injections, an approach widely criticized by some in his voter base.
By Andrew White  January 13, 2022 Comment MoreShare