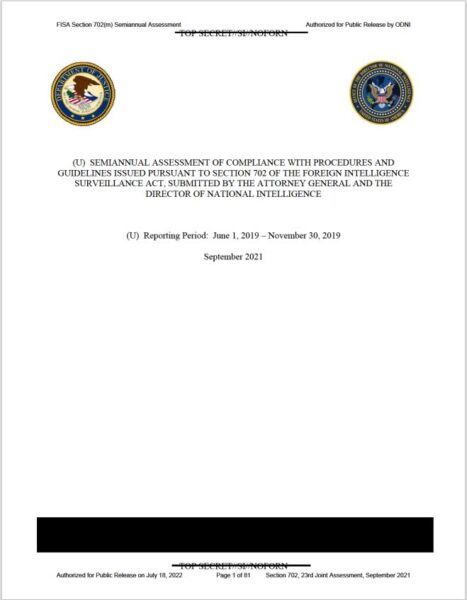 The report is a “Semiannual Assessment” of whether US intelligence agencies, including the FBI, followed proper procedures under FISA section 702. Completed in September 2021, the document remained “Top Secret” until July 18, 2022.

Not surprisingly, the 82-page “Joint Assessment” produced by the Department of Justice and Office of the Director of National Intelligence is completely whitewashed. What this assessment continuously refers to as “compliance incidents” are, in fact, instances where FBI agents violated federal law and, in some cases, the constitutional rights of Americans.

The “reporting period” during which these violations occurred was from June 2019 until November 2019. At the time, the FBI’s Trump-Russia collusion hoax had blown wide open, DOJ Inspector General Michael Horowitz was investigating the Carter Page FISA warrants, and the Trump impeachment witch hunt was well underway. Yet, this report repeatedly excuses these unlawful “compliance incidents” as being caused by “misunderstanding” and “error.”

One section of the report labeled “Query Errors Caused By Misunderstanding or Lack of Awareness,” describes a particularly disturbing incident where:

“FBI personnel conducted queries using United States persons identifiers to look for evidence of public corruption without having a reasonable basis to believe the queries would be likely to return evidence of a crime.” 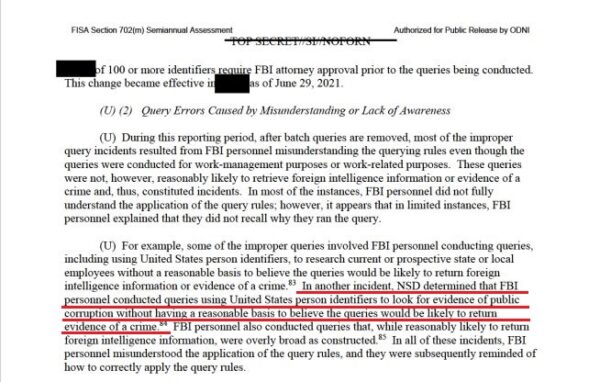 “Without having a reasonable basis” means the FBI conducted these queries WITHOUT probable cause. While this is egregious, it’s not necessarily shocking. It’s the FBI, after all. However, what IS absolutely stunning is what’s buried in a tiny, overlooked, and partially redacted footnote attached to this incident.

To run these bogus queries, FBI personnel used the names, birth dates and business names of Americans who “either held public office [redacted]… or contributed money to the campaign of someone who had run for public office…”

In other words, FBI personnel illegally investigated more than one of our elected officials as well as their campaign donors, and went fishing for evidence to use against them, violating FISA law AND the Fourth Amendment of the Constitution.

President Trump has been saying for years that he’s been illegally spied on by the FBI.
If he wasn’t one of the “United States persons” who “held public office” subjected to these illegitimate queries, then who was? Who else in public office did the FBI unlawfully scrutinize? And whose campaign donors were targeted?

These questions should be of concern to EVERY public official in this country, regardless of their party affiliation and members of Congress need to call for an investigation into these violations immediately.