"I'll run but I need you" wrote Joe Biden.

In an erratic text message exchange with father Joe Biden on February 24, 2019, Hunter Biden told his father that if he did not run for President of the United States in 2020, then Hunter would “never have a chance at redemption” from his self-described reputation as “a f**ked up addict that cant be” trusted.

In the early morning of February 24, 2019 Joe Biden texted Hunter “Good Morning my beautiful son I miss you and love you Dad.” While Hunter was separated from his family for several months, Joe Biden frequently sent similar texts that went unanswered.

Hunter replied with over 20 messages, complaining to his father about his complicated relationships with his ex-wife Kathleen and his lover Haille, Beau Biden’s widowed wife. Primarily, Hunter blamed his father for a New York Times article highlighting his drug use and failed relationships.

“Well dad I guess you were right if I just didn’t say anything or show how Kathleen was a f**king greedy lascivious scorned loiart or make Clearing that I never was with hallie until a year after beau or any of that it would all just go away like the genius Kate and the rest said it would,” Hunter wrote to Joe Biden in a text message that day. “Oh …good morning …from f**king rehab,” Hunter wrote to his father in the next. 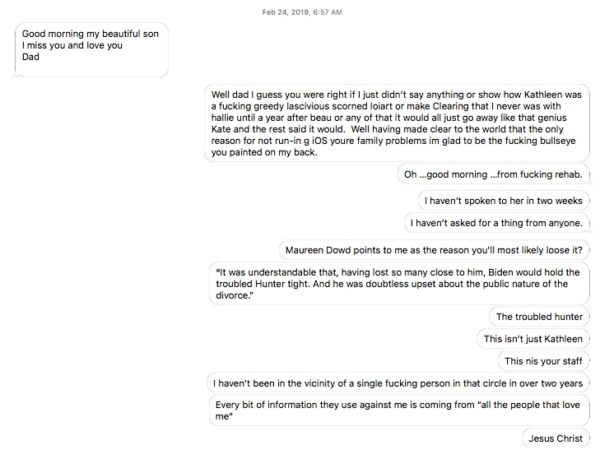 Hunter complained further, pointing to an article by the New York Times reporter Maureen Dowd titled Uncle Joe’s Family Web, which suggested that Joe Biden’s then-hypothetical presidential campaign would be negatively impacted by Hunter’s reported affair with Haille, use of illicit drugs, involvement with prostitutes, visits to strip clubs, and then-crumbling marriage with his ex-wife Kathleen.

“I haven’t spoken to her in two weeks,” Hunter said in his third text. Referring to Joe Biden’s 2020 campaign, Hunter wrote, “I haven’t asked for a thing from anyone. Maureen Dowd points to me as the reason you’ll most likely loose it?” He added, “The troubled hunter,” and complained that “This isn’t just Kathleen.” Hunter directly accused his father’s staff of framing him negatively in the New York Times article. “This nis your staff,” he wrote.

“I haven’t been in the vicinity of a single f**king person in that circle in over two years,” he told his father. “Every bit of information they use against me is coming from ‘all the people that love me,'” he continued. “Jesus Christ,” read the eleventh text message sent in the short span of time. “Don you not see what just happened,” he said in another.

Then, Hunter blamed Joe Biden’s “team” for seemingly tarnishing his public image, making the situation seem like Joe had failed to fix Hunter’s problems. “Your team just made me the uncontrollable troubled tax cheat philanderer sex and drug addict that you tried so hard to fix but couldn’t yt,” he wrote.

“They just totally wrote my life away,” Hunter complained. “And if you try and say otherwise ill have a hard time understanding hownyou rationalize this shit,” said Hunter. “For f**ks sake hallie for the first time I. 17 days talks to me to say im an embarrassment,” he said.

“To MY family,” Hunter went on. “You think she doesnt feel comfortabl;e saying that knowing there is no price to pay.”

Towards the end of the exchange, Hunter accused Joe Biden of pointing out that he was a “f**ked up addict” that couldn’t be trusted. 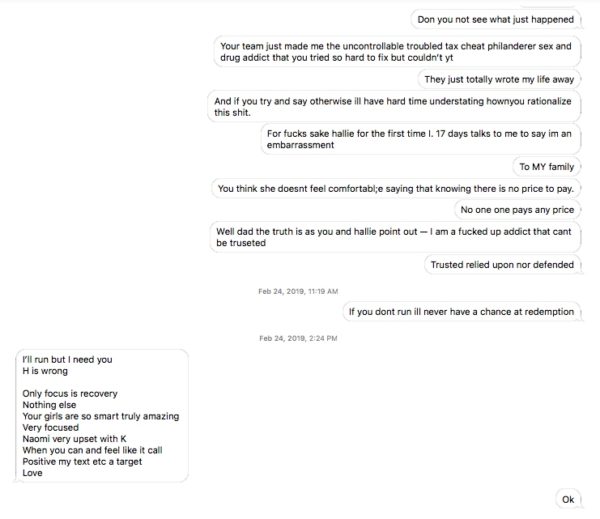 “No one pays any price,” Hunter said. “Well dad the truth is as you and hallie point out – I am a f**ked up addict that cant be truseted,” he continued.

After the multitude of text messages sent to him, Joe Biden responded affirming that he would run for President. “I’ll run but I need you,” Joe told Hunter.

“H is wrong,” Joe Biden wrote, referring to Hallie Biden. “Only focus is recovery Nothing else Your girls are so smart truly amazing Very focused Naomi very upset with K When you can and feel like it call Positive my text etc a target Love”