Bratton Identified Herself As CPAC's 'Executive Director,' Slammed Trump And Praised Biden and the Obamas

Conservative Political Action Conference (CPAC) official Regina Bratton is an unabashed anti-Trumper, pro-masker and Obama and Biden fan, NATIONAL FILE has learned. Bratton’s anti-Trump activism highlights the plague of pro-Democrat subversion in the conservative movement. CPAC’s Regina Bratton said during the 2020 election that Joe Biden was “our last hope” but was disappointed in his choice of Kamala Harris as running mate. Bratton, a black woman, disparaged Kamala Harris because “she’s married to a white dude” and thus “she is not one of us.”

At the recent CPAC conference in Dallas, Texas, Regina Bratton reportedly identified herself as the “Executive Director” of CPAC in order to publicly distance the conference from Congressman Matt Gaetz. Bratton’s title as “Executive Director” was reported by Zach Petrizzo, a leftist reporter who now works for the left-wing rag Salon. Petrizzo later took Bratton’s name out of his article, but Bratton’s identity was preserved on other outlets including nothingbutpolitics’ cross-post of Raw Story’s aggregation of Salon’s article. NATIONAL FILE contacted Petrizzo and asked why Bratton’s name was removed, and specifically if it was removed at CPAC’s request, and did not receive a response.

Regina Bratton is listed on Zoominfo as working at the American Conservative Union as of 2021. Regina Bratton is listed on the CPAC NOW website as CPAC Now producer, and she recently shared segments featuring CPAC boss Matt Schlapp and his wife Mercedes Schlapp, including a CPAC Now segment. CPAC officials including the public relations staff and communications director Ian Walters — who kicked conservative reporters out of CPAC in 2020 — did not return requests for comment on Bratton. At CPAC’s 2021 conference in Florida, organizers required attendees to wear masks. 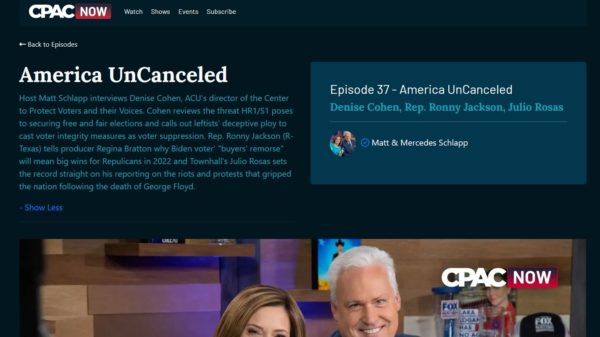 Regina Bratton was reportedly identified as CPAC’s “Executive Director” when she made her move against Gaetz. 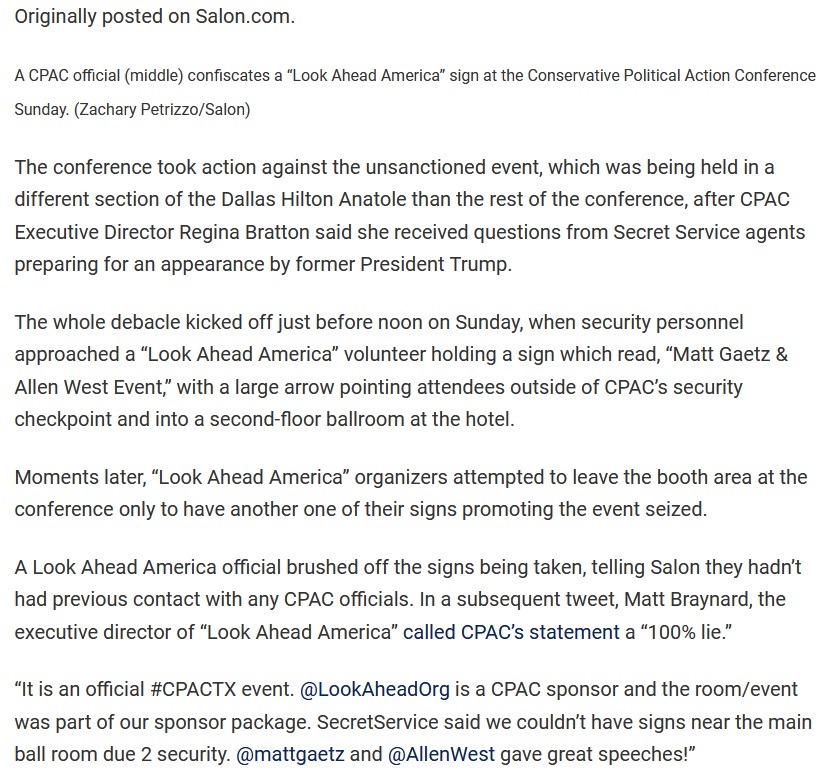 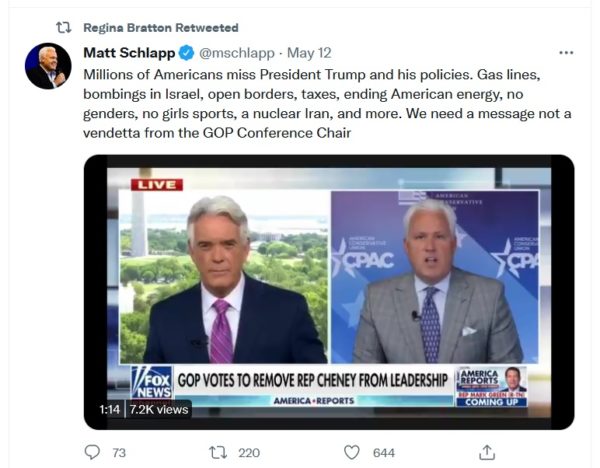 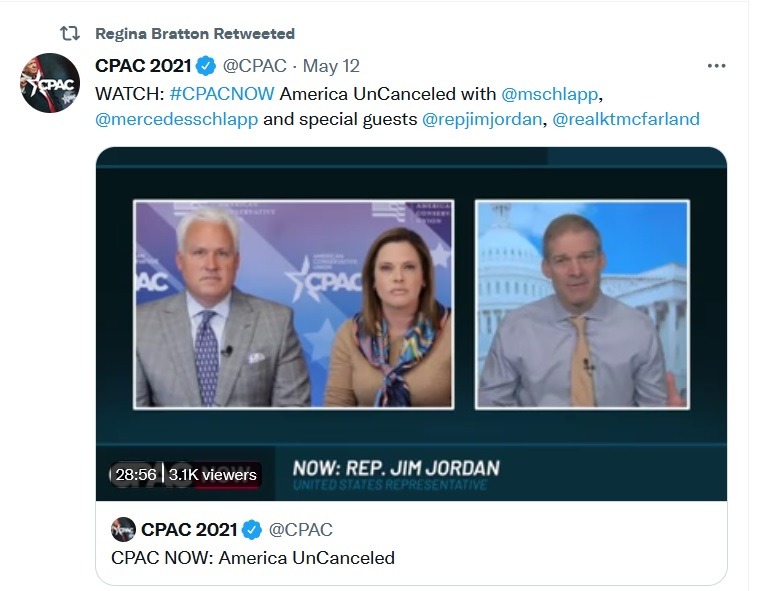 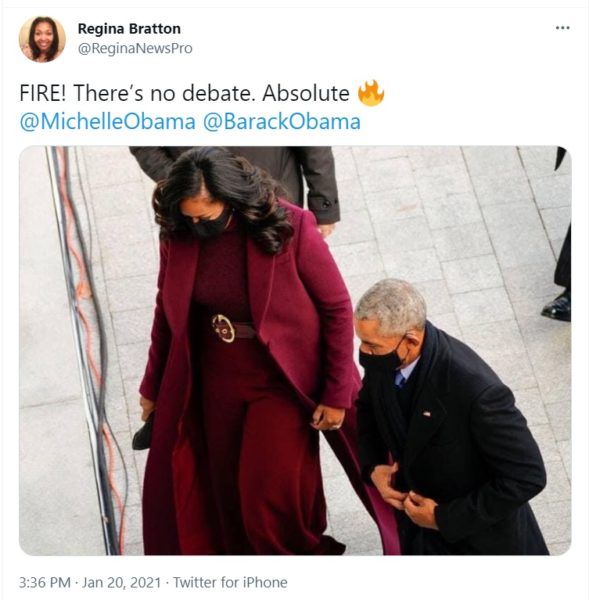 Regina Bratton says that Kamala Harris “is not one of us” because she is “married to a white dude,” Doug Emhoff, who is Jewish. 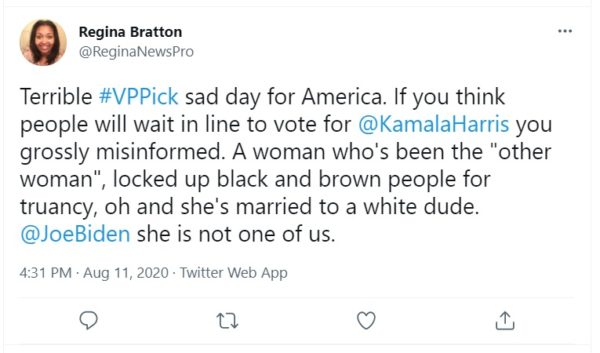 Regina retweeted a call for the NFL to apologize to Colin Kaepernick. 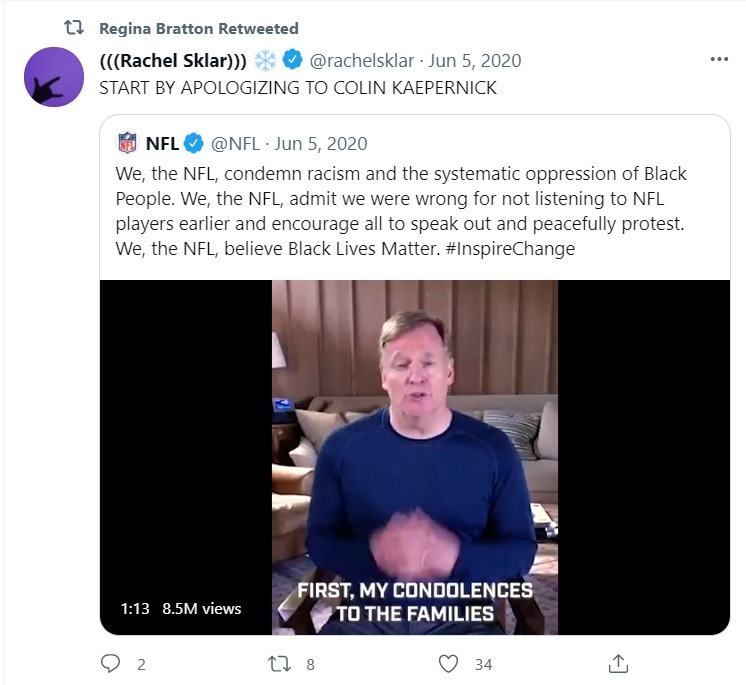 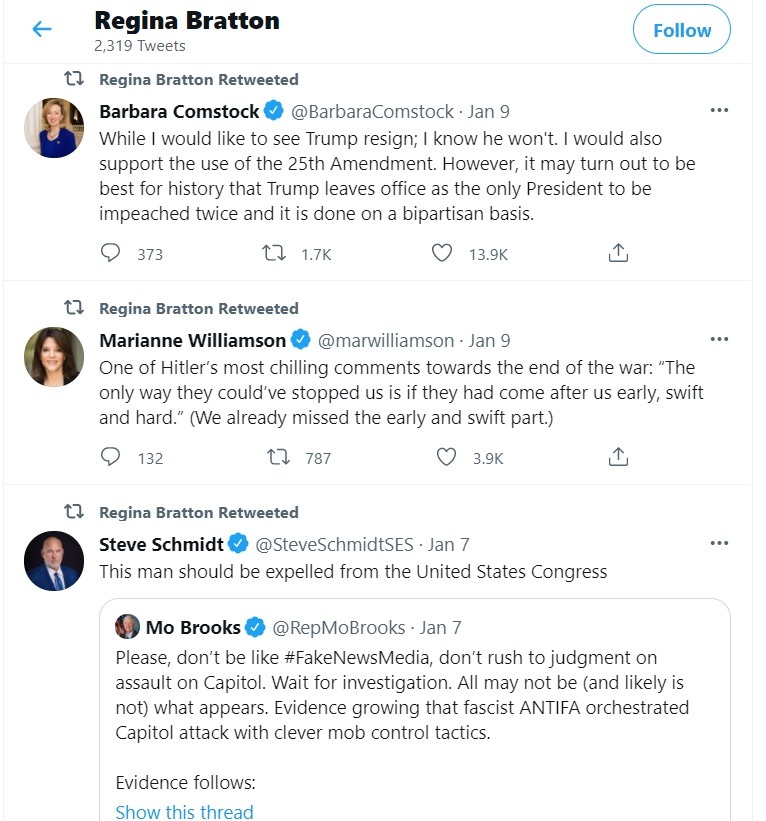 Regina Bratton has hyped COVID extensively and pushed for mask use: 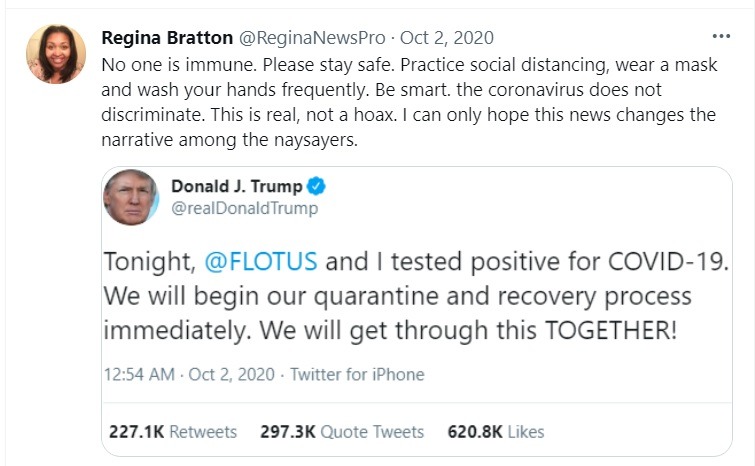 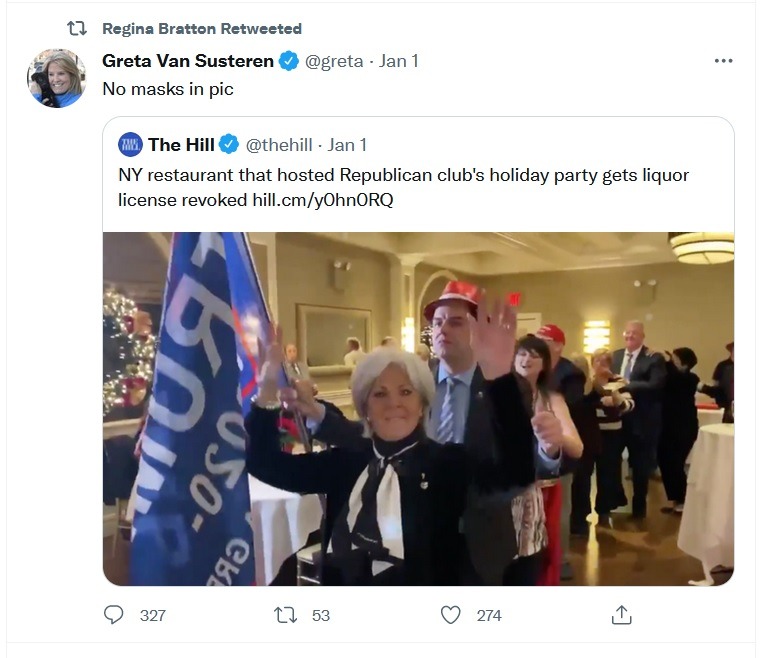 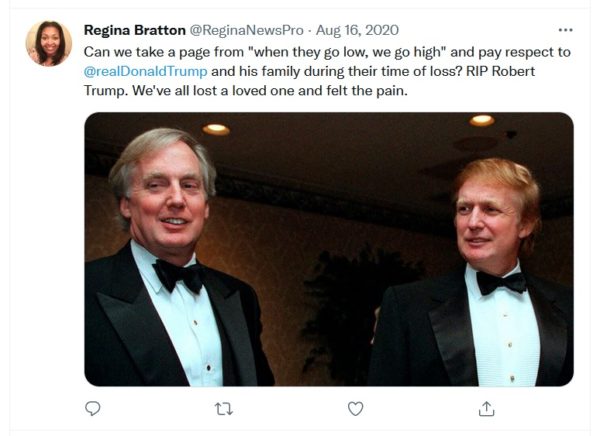 Regina Bratton praised Ruth Bader Ginsburg and clearly does not like Trump. 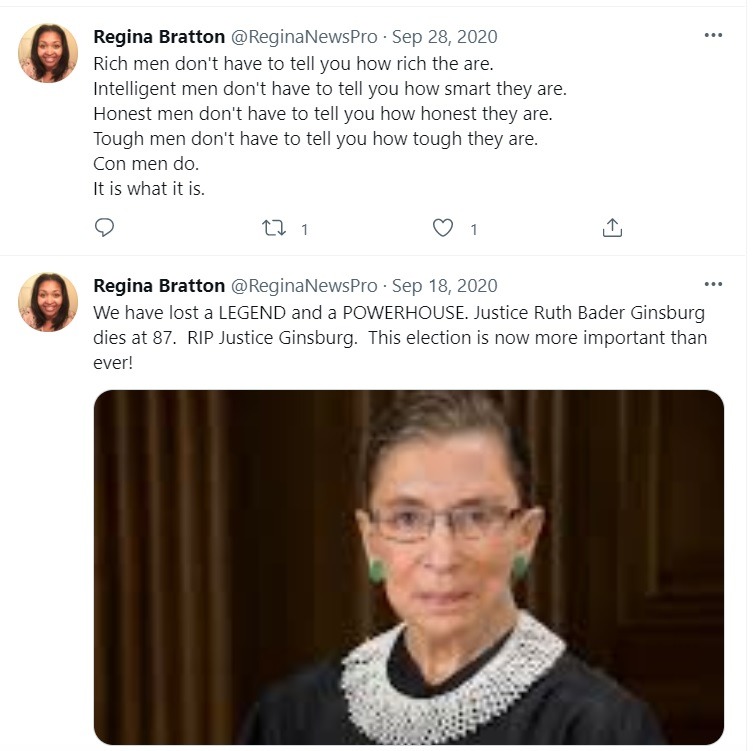 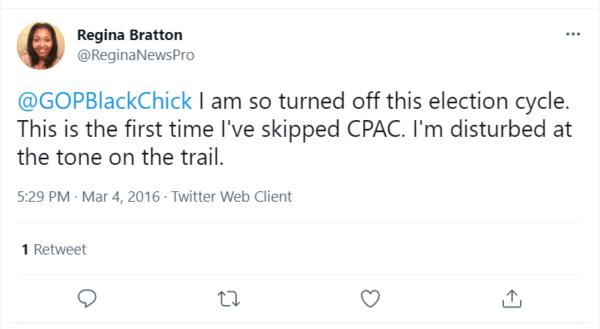 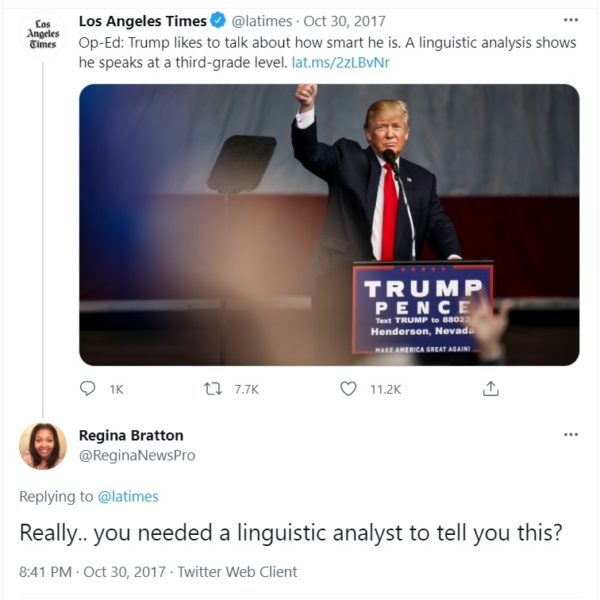