Popular radio host Stew Peters, host of the Stew Peters Show on Red Voice Media, has been banned off of Twitter shortly after reporting on the supposed deaths of 2 children among the 24,000 children in Australia who were herded into a large stadium to be forcibly vaccinated.

Popular radio host Stew Peters is the latest to be banned off Twitter following a video that Peters published covering reports that 24,000 children in Australia are being herded into a stadium-based quarantine facility to be forcibly injected with the COVID-19 vaccine, which Peters says has been attributed to at least two deaths. According to Red Voice Media, “Stew Peters spoke with an Australian ex-military official who confirmed that AT LEAST two children are dead after being inoculated in a mass of 24,000 kids that were ushered into a sports arena to take the jab in the absence of any adults.”

Speaking to National File, Peters said the decision came without an explanation, and condemned the big tech platform’s censorship of conservatives. “There was no explanation, and Twitter doesn’t feel the need to apologize, because they’re protected by the ruling class elites, the oligarchs that abuse and kill Americans every day as more and more freedoms are stripped from the hard-working Christians who seek only to be free in the greatest country the world has ever known.”

Peters added, “We are living in very dangerous times, and that danger is exasperated when masses of people tolerate tyranny.” Peters also pointed to a tweet he wrote explaining that the Biden White House, the CDC, the FDA, Moderna, Pfizer, the World Health Organization and Johnson & Johnson do not mandate vaccines. “I suspect it was prompted by this TRUTH,” Peters told National File, “Which had over 10,000 retweets in 12 hours.” Peters remains on Gab and on Telegram. 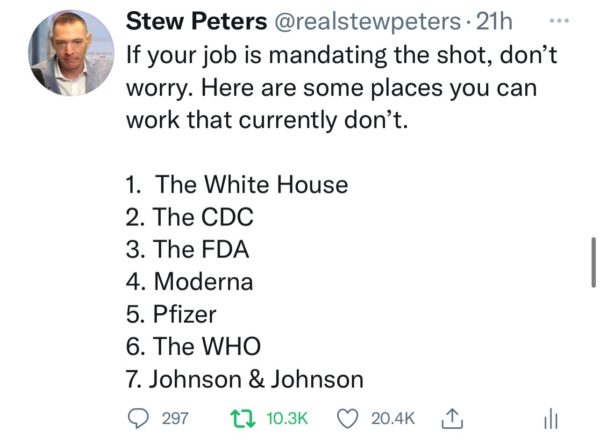 As National File reported, Australia’s Brad Hazzard, the Minister for Health and Medical Research, has told parents in a press conference that 24,000 children will be sent to a stadium to get the experimental Covid-19 vaccine, and parents will not allowed to be present. Hazzard insisted to parents that their children would be “well looked after.”