Coordinated Looting on Twitter Goes Unfiltered With No Bans

Coordinated Looting on Twitter Goes Unfiltered With No Bans

#BlackLivesMatter as it says on Twitters new bio, and they are allowing people to openly plot looting

Twitter finds pictures of birthday parties too offensive to view without a warning of “sensitive content,” but when people plot to loot Santa Row it’s available for all to see. After 20 hours, the reports had still be untouched by Twitter which allowed people to coordinate criminal intent unchecked and unpunished. 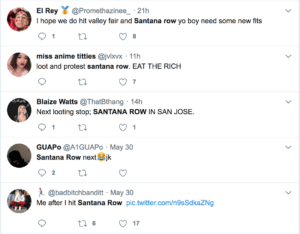 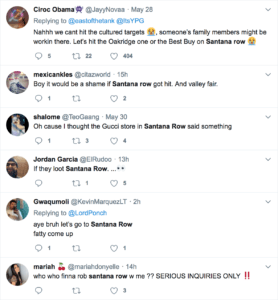 A Twitter spokesperson did release a comment to Breibart News, however did not address the criminal nature of the Tweets.

“We’re taking proactive action on any coordinated attempts to disrupt the public conversation around this issue.”

Racism does not adhere to social distancing.

Amid the already growing fear and uncertainty around the pandemic, this week has again brought attention to something perhaps more pervasive: the long-standing racism and injustices faced by Black and Brown people on a daily basis. 🧵 pic.twitter.com/8zKPlDnacY

While Twitter continues to remains silent on matters concerning censorship of conservative voices, Twitter executives remain equally as silent when it comes to their lack of intervention in posts, users, and even verified accounts which demonstrate intent to commit crime, and visibly use the platform to coordinate said crimes.

Twitter has taken painstaking efforts in the past to update their own terms if service to not allow certain people to have accounts. For example, Laura Loomer should have been able to have her Twitter back when she was officially in the campaigning stage of her congressional candidacy.

Twitter updated the TOS the day she would have been able to request her page back.

Again, Twitter has shown it has the ability to block or even heavily suppress content after this journalist posted a photograph with Ann Coulter, Milo Yiannopoulos, and another dinner guest.

The dinner guest was permanently banned from Twitter shortly after the photo was posted, and this journalist has had every single photo labeled as sensitive content since that day. 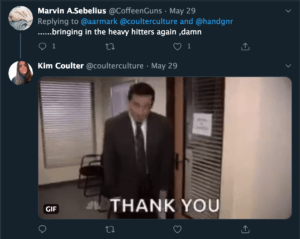 Thus far, Twitter has not changed its behavior since the order was signed.