A group of Chinese nationals infiltrated the 2016 campaign of North Carolina Governor Roy Cooper, having been identified in a number of photographs taken at Democrat Party Headquarters on Election Day 2016. Included in the group is a Marxist political strategist and Chinese influence agent with direct ties to the Chinese Communist Party and high-level Communist Chinese think tanks.

On the webpage where the photographs were posted, a caption reads “On November 9, 2016, the main members of CAECA led NCCSEA members and visiting scholars to observe the president election at the Democratic Party headquarter in Raleigh.” Accompanying the Chinese nationals in a large group photo was a Democrat Party operative. An “NC Dems” logo is clearly visible in the background.

Pictured among the group of Chinese nationals is Zheng Zhifa, a Marxist political strategist with direct ties to the Chinese Communist Party and high-level Communist Chinese think tanks. Zhifa, who traveled to the United States from China as a member of the North Carolina Chinese Scholar Exchange Association (NCCSEA) at Duke University, had close access to North Carolina Democrats throughout his time in the United States, often through his relationship with John Wei, also pictured. On election night, Zhifa was photographed alongside Roy Cooper several times, including in a shot displaying a Chinese-language newspaper purported to be an edition of the China Press, a newspaper tied to the Chinese Communist Party that will be addressed later in this article. 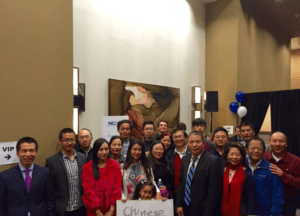 A professor of Marxism at China’s Nanchang University, Zhifa is a high-level Chinese Communist and plays the role of a senior thought leader in the world of Marxist political strategy. He was recently selected as a member of the highly esteemed Xi Jinping Research Center for Socialism and is also a member of the World Socialism Research Center, a think tank connected to the Chinese Academy of Social Sciences, which operates under the control of the State Council of the People’s Republic of China. 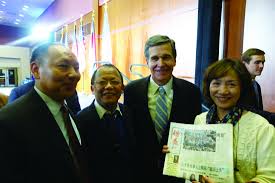 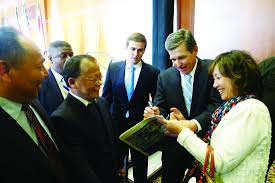 As recently mentioned, also among the Chinese nationals is John Wei, a Wake County-based Chinese Democrat with close ties to Governor Cooper and other prominent North Carolina Democrats whose plan to harvest the blood of 2020 RNC attendees I reported on earlier this week. I also reported on Wei’s deep ties to the upper echelons of the Chinese Communist Party, including President Xi Jinping, and Xi’s so-called “secret weapon,” the United Front Work Department (UFWD). Wei is the Chairman of the aforementioned CAECA – the Chinese America Economic and Cultural Association – and played a central role in bringing the group of Chinese nationals to Democrat Party HQ. He also sits on at least two government boards, and the board of Raleigh-based First Citizens Bank.

Although the website on which the photographs were discovered makes the claim that the Chinese foreign nationals and Marxist political strategists were merely observers, further details warrant additional questions about the risk of malign foreign influence on our democratic institutions.

Ahead of the 2016 elections, on September 29th, 2016, Marxist political operative Zheng Zhifa and Democrat-Chinese Influence peddler John Wei were photographed together at the Chinese Embassy in Washington, D.C., this time alongside the Chinese Ambassador to the United States, Cui Tiankai.

A day later, on September 30th, 2016, a Chinese political science professor at Duke University, Dr. Li Xiang, held a roundtable lecture with Zhifa and fellow NCCSEA “scholars” as part of the “Social Science Workshop for Chinese Scholars” and discussed what appears to be a detailed, microtargeted analysis of America’s democratic institutions. The workshop was titled “Measuring Closeness in 3-Candidate Elections: Theory, Method, and an Application to Strategic Voting.” Less than 40 days later, the very group of Chinese nationals that took part in the roundtable lecture was photographed at North Carolina’s Democrat Party HQ.

The close Communist Chinese ties to North Carolina’s Democrat Party didn’t cease after the 2016 elections. Following the 2018 midterm election cycle, in a NOW DELETED article from the China Press Weekend Edition newspaper, a Chinese author reporting from the event bragged that “because provisional ballots have not yet been counted, there is no doubt that the Democratic Party will break the previous situation in the [North Carolina] State House of Representatives.” The article prominently featured a Democrat victory celebration held by newly-elected Democrat State Senator Wiley Nickel alongside activists with ties to North Carolina’s malign Chinese influence organizations. Based on interviews taken at the event, Wayne Goodwin – NC Dems Chairman – and Justin Guillory – Executive Director of left-wing think tank Think NC First – both appear to have been present at the party.

While the China Press – or QiaoBoa – functions as a newspaper, it is far from most people’s definition of such. After China Press founder Xie Yining was found murdered at the company’s headquarters in 2018, an Epoch Times report featuring information sourced from a former associate of Yining indicated that he was a special agent working on behalf of the Chinese Communist Party government.

According to a report by the Hoover Institute, “Qiaobao, or the China Press (僑報), is the flagship pro-PRC newspaper published in the United States.” The report goes on to connect the China Press to China’s United Front Work Department by way of the Overseas Chinese Affairs Office which merged with the UFWD in 2018. According to the Hoover Insitute, the “Overseas Chinese Affairs Office of the State Council of PRC set up the firm in the early 1990s but hid its financial role in these companies…Illustrative of Beijing’s push to dominate Chinese-language media in the United States, SinoVision, Qiaobao (China Press), and the Sino American Times all belong to the Asian Culture and Media Group.”