New details are emerging about Democrat vice presidential candidate Kamala Harris’ Brahmin family from India on her mother’s side. The Brahmins are the highest caste in India’s Hindu system, reviled by many for their sense of racial superiority and the associated benefits they enjoy in Indian life. Kamala Harris’ uncle is listed as a top consultant to the government of India, and has worked for a group funded by India’s military. So what is Harris’ uncle’s expertise? He is an expert on nuclear weapons. Kamala’s uncle’s work for the Indian government could be considered a NATIONAL SECURITY THREAT to the United States of America.

Kamala Harris’ uncle Gopalan Balachandran is listed by the Journal of Defense Management as “a Consulting Fellow at the IDSA,” though the press has recently referred to him as a “former” consultant for the IDSA. The IDSA stands for “Institute for Defence Studies and Analyses” (IDSA), which is a think tank in New Delhi that is funded by the Indian Ministry of Defence.

China’s ambassador to India held a meeting at IDSA in New Delhi in June of this year to urgently discuss India-China relations. Balachandran’s 2013 archived IDSA bio lists him as a “Consulting Fellow at the IDSA.” The investigative blog Mining Awareness reported that Balachandran wrote for the IDSA as recently as 2019 and informally advised the think tank as recently as 2020.

Uncle Gopalan’s Journal of Defense Management bio also lists another example of direct employment by the Indian government, stating, “He is a Consultant both to the Americas Division of the Indian Ministry of External Affairs and to the Confederation of Indian Industry.” Uncle Gopalan has been active in the press on Kamala’s behalf, even talking to CNN on the phone. 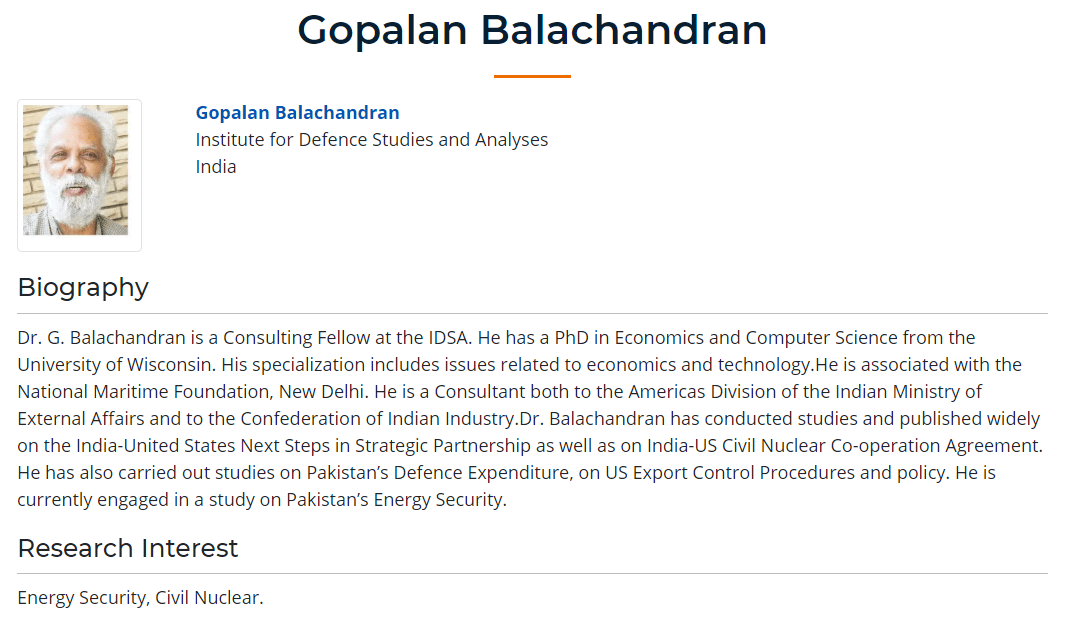 Here is Uncle Gopalan on behalf of IDSA discussing the “Current Negotiations on the Iranian Nuclear Issue” in 2013, which included Gopalan crediting Iran with making a positive action in at least one instance:

The New Yorker reported: “Harris’s mother, Shyamala Gopalan, the Brahman daughter of a diplomat from Chennai, graduated from the University of Delhi at nineteen, and, avoiding an arranged marriage, went to Berkeley to study nutrition and endocrinology. There, she met another graduate student, Donald Harris, from Jamaica, who was pursuing a Ph.D. in economics. The student civil-rights movement, centered on the Berkeley campus, gave the two young immigrants a shared context. “They both identified as people of color and people who were oppressed by a white-male-dominated world,” Meena Harris, Kamala’s niece, told me. “Their fields were science and economics—there were not many Indian women or black men.” They were married while still in graduate school, and Kamala was born in 1964; another daughter, Maya, came two years after that…Hindu customs and cosmology infused their lives. The name Kamala means lotus, and is another name for the goddess Lakshmi.” New Yorker passage ends

Harris was happy to acknowledge herself as the first potential Indian member of the United States Senate, back when she was running for Senate in California and 2016 and doing a Democrat convention interview with a network that caters to an Indian audience.

India's infatuation with Harris rn is a perfect example of how significant a role caste still plays within the Indian minset, and that the progressive kids equally perpetuate and retain it also cause most of them come from upper class backgrounds.