Ben Shapiro Shilled For the Replacement of White People In America

Ben Shapiro Shilled For the Replacement of White People In America

The Great Replacement is real

Neoconservative pundit Ben Shapiro of The Daily Wire shilled for the bipartisan Uniparty movement to replace White people in America through mass migration, echoing the ideology of Jewish identitarian groups like the Anti-Defamation League (ADL).

Shapiro tweeted a racially-charged, anti-White message on June 16, 2017, during the first year of the Donald Trump presidency. Shapiro tweeted, “And by the way, I don’t give a good damn about the so-called ‘browning of America.’ Color doesn’t matter. Ideology does.” 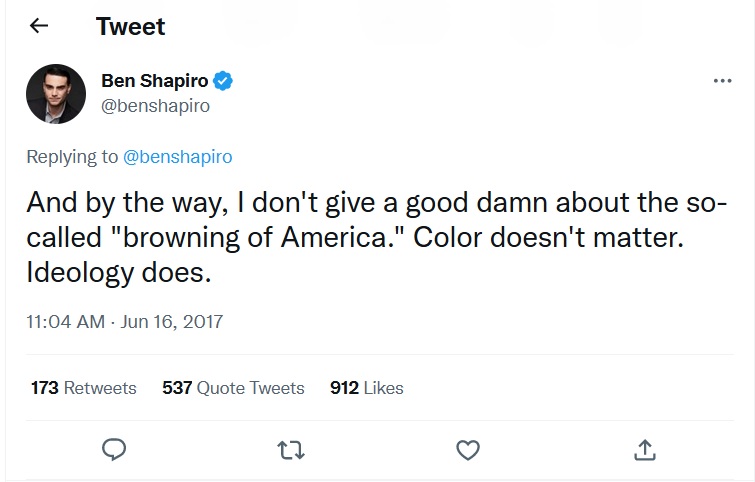 As the White share of the population declines in America, many commentators on both major “sides” of the aisle, including Shapiro-style conservatives, militantly propagandize against White racial identity, making it clear that the establishment in the United States wants pro-White interests to be marginalized.

The “Great Replacement,” which has been noticed by many, is still presented as a so-called “conspiracy theory” even though facts prove that it is happening, in a very real statistical and also political sense.

The Anti-Defamation League (ADL), a pro-Jewish advocacy group that leads the charge for censorship against dissident ideas, and other pro-Jewish groups called for the Biden Administration and congressional leaders to stick a “pathway to citizenship” (also known as amnesty) for illegal immigrants into a recent spending bill (a move that got blocked in December 2021 by the Senate Parliamentarian, who effectively ruled that globalists could not radically transform America’s immigration policy within the arcane text of a spending bill).

Even though the Anti-Defamation League promotes amnesty in the United States, the ADL staunchly defends the sovereignty of Israel and the privilege of Jews in Israel to maintain a nationalistic majority within that disputed country’s general population. The ADL even uses arguments to defend the Jewish nation-state that makes a casual observer wonder: How would the ADL feel about their own propaganda if the word “Jews” was replaced in their text by the word “Americans”?

As the ADL explained on page 53 of its 2012 publication Israel: A Guide For Activists”: “The proposal of a bi–national state is nothing less than an indirect attempt to bring about an end to the State of Israel as a national homeland of the Jewish people. The State of Israel was established as a Jewish state out of the nationalist aspiration of the Jewish people and an international recognition of the rights of Jews to a homeland following millennia of persecution. It is unrealistic and unacceptable to expect Israel to voluntarily subvert its own sovereign existence and nationalist identity. Israel is a self–declared Jewish state, with founding principles that guarantee the equal treatment and protection of all its citizens – regardless of religion, ethnicity or color.”

“Bi–nationalism requires Israel to forsake its Jewish nationalism and identity, along with its status as a refuge for Jews fleeing persecution. Furthermore, bi–nationalism is unworkable given current realities and historic animosities. With the high birth rate among the Palestinians, along with a return by Palestinian refugees and their descendants now living around the world, Jews would be a minority within a bi–national state, thus likely ending any semblance of equal representation and protections,” the ADL publication states.

“Additionally, given the degree of hostility to Jews by many Palestinians, what is euphemistically called ‘bi–nationalism’ would mean risk of persecution and oppression for those Jews allowed to remain on the territory of their former state,” the ADL publication states.