'Permanent protection for individuals who live under the fear of detention and deportation...'

49 Jewish groups including the Anti-Defamation League (ADL), run by Jonathan Greenblatt, sent a letter to Joe Biden, Kamala Harris, Chuck Schumer and Nancy Pelosi urging the Democrats to put a “pathway to citizenship” for illegal immigrants “in any economic recovery or infrastructure legislation that moves forward via budget reconciliation.”

The letter was spearheaded by Bend the Arc: A Jewish Partnership for Justice, and the ADL signed onto it. The letter states that, “As Jewish organizations that collectively represent millions of American Jews, we urge you to prioritize the inclusion of a pathway to citizenship for immigrant youth, Temporary Protected Status (TPS) holders, essential workers, and their families, in any economic recovery or infrastructure legislation that moves forward via budget reconciliation….As Jews, we are taught that each person is created b’tzelem elohim, in the divine image. Each of us is equally deserving of the opportunity to prosper in safety. ”

The letter argues that “Permanent protection for individuals who live under the fear of detention and deportation, as well as the constant threat of exploitation, is not just the moral action but also the most sensible choice” and “Immigrant workers and their families are vital to the fabric of our nation – it is time our government acts accordingly.”

The ADL is a driving force in pushing the suppression of free speech in America, expressing outrage at public discussion of “replacement migration,” which is happening in America and which is even touted on the United Nations website. But the ADL also strongly fights against mass immigration for the nation state of Israel: 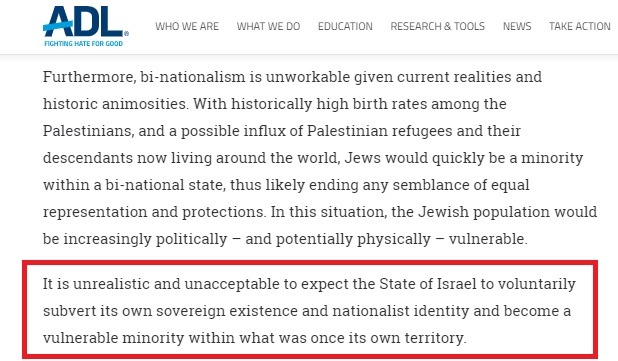