Alexandria Ocasio-Cortez, the power behind the Green New Deal, betrayed her dedication to the measure to join Biden’s task force

Joe Biden’s debate declaration that he does not support the Green New Deal sent US Rep. Alexandria Ocasio-Cortez (D-NY), to tweeting in an effort to control the damage to her Leftist reputation. In doing so, however, she showed she was willing to compromise on her principles.

When pressed by President Trump about his support for Ocasio-Cortez’s New Green Deal legislation during the first presidential debate Tuesday night, Biden was forced to distance himself from the radical agenda stating, “The Green New Deal is not my plan. No, I don’t support the Green New Deal.”

Our differences are exactly why I joined Biden’s Climate Unity Task Force – so we could set aside our differences & figure out an aggressive climate plan to address the planetary crisis at our feet.

But in June of this year, when Biden rolled out the “Biden Plan for a Clean Energy Revolution & Environmental Justice,” he said he used the Green New Deal as a framework for a Biden administration energy policy.

The Washington Examiner, today, points out that the official Biden-Harris campaign website still reads, “Biden believes the Green New Deal is a crucial framework for meeting the climate challenges we face.” 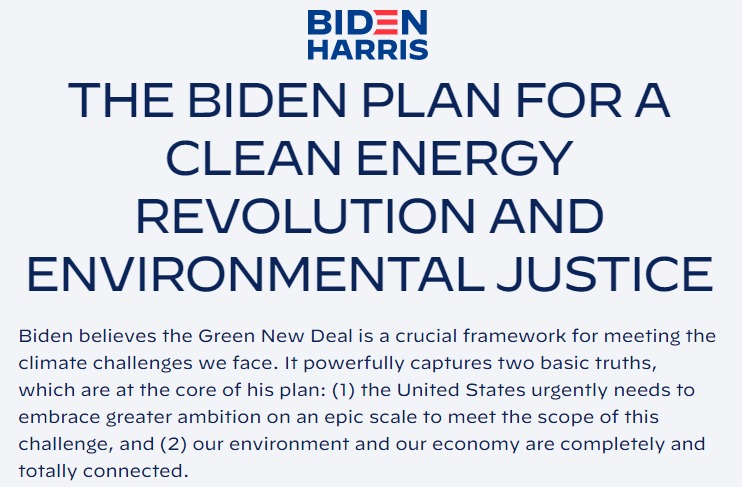 Additionally, Biden’s running-mate, Sen. Kamala Harris (D-CA), is a co-sponsor of the Green New Deal, which makes Biden’s distancing of his campaign from the measure awkward at best.

Ocasio-Cortez, the main player in the freshmen group of Marxist-Progressives in Congress known as “The Squads,” only began supporting Biden for president after Sen. Bernie Sanders (S-VT), dropped out of contention.

Ocasio-Cortez and her “Squad” have been confrontational with Democrat congressional leadership for the entirety of their tenure in office.