A nearly year long struggle with drugs that required two trips to rehab. The author believes childhood sexual abuse is why.

by Archive
in 2020, Exclusive, News, Politics

Yesterday National File published several pages from what our whistleblower has identified as the 2019 diary of Ashley Blazer Biden, the 39-year-old daughter of Democrat presidential candidate Joe Biden. The diary was started during the author’s visit to a Florida drug rehabilitation facility in January of 2019, and detailed her nearly year-long struggle with abusing cocaine and other drugs.

In the first entry from the diary, dated January 25, 2019, the author wrote about her hopes for the future. “I am also trying to sort out my life – what is it that I want & need,” she wrote, “Focused on myself this time around but like a kid with Aspergers [sic] unsettled in the change!”

“I obviously don’t know what the future holds but I also don’t know where I’ll be – but I would like to remain sober – although getting high – like an Aspergers kid!” 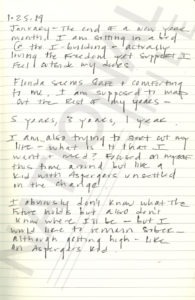 In an entry on page 3, dated January 26, 2019, the author described her recent drug abuse as “a relapse that maybe I needed.”

She also noted that a person named Lisa told her that the relapse was “‘just part of your journey,'” and the author agreed with this sentiment. 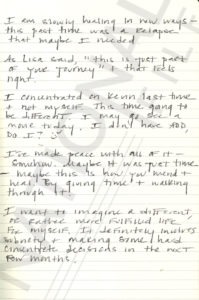 On the next page of the diary is an undated series of goals to accomplish by January of 2020. Writing in January of 2019, in one year the author hoped to have “been sober from C + hard for a year,” be gainfully employed, and be divorced from her husband, among other goals. 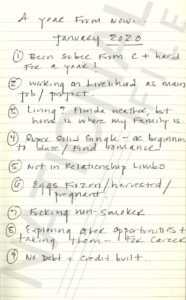 The next 64 pages detail the author’s time at a rehabilitation facility, mostly relating to romantic partners she met while in recovery.

However, after leaving the facility, it unfortunately did not take long for the author to experience another relapse.

A diary entry dated March 16, 2019 begins, “I relapsed. F**king again. Insanity is the definition. Always hoping it will be different & it never is. Stuck in this cycle of “f**k my face, repeat.”

The next several pages detail her disappointment at relapsing, and details that her parents, who our source has identified as Joe and Jill Biden, and new boyfriend she met in the Florida facility, were both supportive.

“The difference this time around was that I told Elizabeth, Mom, & Dad this morning. Mom & Dad worried but incredibly supportive,” she wrote. “E has also been so supportive. He asked if he could come & stay with me for the next few days – timing is off & not right but a sweet gesture.” 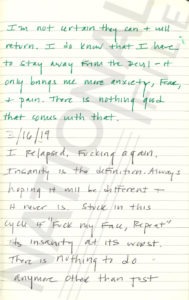 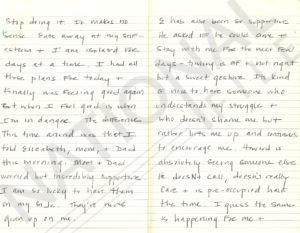 Unfortunately, it seems this recovery too was short lived. After several days in late March and early April with no entries, the April 7, 2019 is a cryptic entry wherein the author simply wrote “I’m pretty sure I’m going to make it.”

Again tragically, the next entry does not reflect recovery.

Incorrectly dated to July 28, 2019, but likely actually written on or around May 28 or June 28, 2019, the entry seems to reveal that the author spent the last several months abusing drugs.

“OK baby – time to buck up,” it begins. “I am calling in all the troops and hunker down for 3 days.”

“I am fully ready, geared up, and in shape to take this battle on full throttle,” the author wrote. “You have no choice. You are going to start working the program – following all recommendations to a T.” 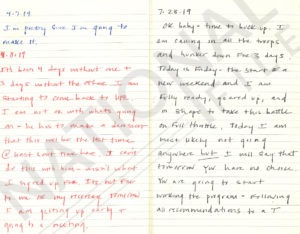 An entry on the next page seems to suggest the author spent at least a few days without abusing substances, and suggests the previous entry was written in May or June. 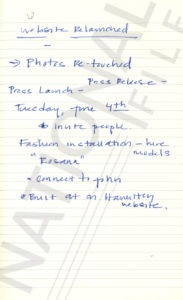 In the next few entries, the author repeatedly states her hopes for her life and lists the many tragic consequences of drug abuse, particularly the abuse of cocaine.

“Tomorrow’s accessibility + setup allows for me to partake but at what cost to me? What does it do for you? You end up with the following,” wrote the author.

Ashley Biden’s brother, Hunter, was infamously ejected from the Navy due to crack cocaine abuse, and a photograph of Hunter Biden with a crack pipe in his mouth was recently published by the New York Post. 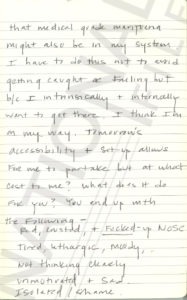 “Yesterday it was an overwhelming urge in my body,” she wrote. “What I realize is that access to any of it – touching the emotions – ignights the fire,” she added. “So – it’s the only way to get rid of all contacts.” 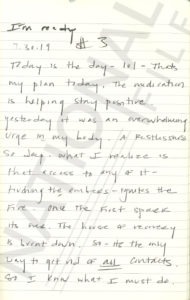 In one particularly heart wrenching, stream of conscious entry that is undated, the author reveals that she has been lying to her family about drug abuse and addiction since she was 13-years-old. 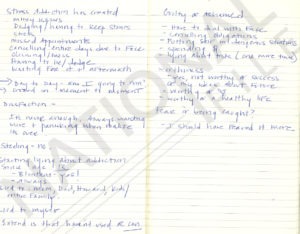 This latest dedication to recovery seems to have lasted until around August 1, when an entry reveals the author apparently relapsed again, even as she prepared to leave Florida to work for Joe Biden’s presidential campaign in Philadelphia, Pennsylvania.

“Love Miami but think it’s time to get back home & work on campaign. Headquarters in Philadelphia,” she wrote, before eventually continuing on to the topic of addiction. “It’s about the predictability of addiction. Craving, wanting, needing, having to have – this is all very normal & part of the disease. The only way to arrest this salvation is to sustain & by sustaining over time, that feeling is put into remission.” 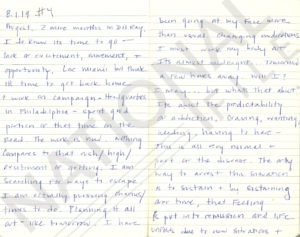 Unfortunately, perhaps reeling from the stress of moving to Philadelphia and working for the Biden campaign, the author reveals that she used again on in the next diary entry, dated August 4, 2019.

“And again. It’s like nothing I’ve ever seen before. The hard hardness is on another level,” she wrote. “Is this really going to be it? Because you can’t afford to continue on. Your looks & health are at risk. It only gets worse.” 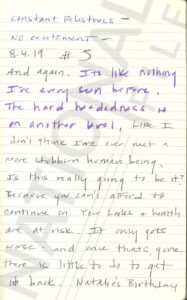 This guilt, again, did not last, as an entry on August 12, 2019, seems to suggest the author used again. 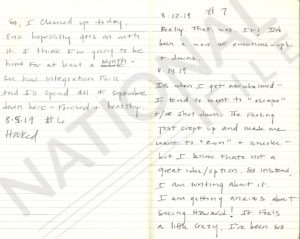 This, again, did not last, and it seemed another visit to a rehabilitation facility would become necessary. In a diary entry dated to September 3, 2019, the author wrote “This will ruin your entire life.”

In an entry dated September 4, 2019, the author revealed that it was her second day at another facility.

“Second day – now on unit. All the women are lovely & staff has been great.”

The author then wrote about the then-upcoming presidential debate, and wrote  about the guilt she felt about “what I put/stress I just put my dad through.”

“The idea of being 100% sober is appealing to me but foreign. My life sober – what does that look like?” 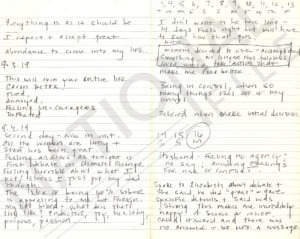 The next several entries reveal that the author intended to “discontinue” the diary after they were released from the rehabilitation facility.

At one point in the diary, as National File reported, the author speculated that childhood sexual abuse was the reason for her increased sex drive and desire to abuse drugs:

“Was I molested. I think so – I can’t remember specifics but I do remember trauma,” wrote the author, before listing a series of potential incidents, one of which may have included Ashley Biden’s cousin Caroline Biden, as the author says she remembers “being somewhat sexualized” alongside a person named “Caroline.”

The author then wrote that she remembers “showers with my dad” that were “probably not appropriate.”