Jill C. Tyson, a top deputy to FBI Director Christopher Wray who played a key role in getting Wray confirmed to the FBI’s top post, admitted that the FBI totally deleted the entire “Black Identity Extremism” category for domestic terrorism after consultations with the National Organization of Black Law Enforcement (NOBLE), an organization funded by Coca-Cola and Walmart among others. The FBI then replaced the category with a new label, “Racially or Ethnically Motivated Violent Extremism” (RMVE) which refers to people that Tyson refers to as “extremists who advocate violence in furtherance of a perceived superiority of the white race,” according to Jill C. Tyson’s letter to Democrat Congressman Bennie G. Thompson, chairman of the Committee on Homeland Security, and Democrat Congressman Cedric Richmond. Tyson wrote her 2020 letter to the Democrats just four days after George Floyd’s death, at the beginning of nationwide black riots when an FBI “Black Identity Extremism” program might have come in handy.

That “RMVE” label is now being used to target January 6 election integrity protesters from the U.S. Capitol, according to a report funded by the Department of Homeland Security that urges Congress and the federal government to “create crimes of domestic terrorism” in response to January 6. So who is Jill C. Tyson, the woman who revealed the FBI’s anti-white policy? Jill C. Tyson is Wray’s Deputy Director for Congressional Affairs. She previously worked in the DOJ’s legislative affairs department and on Capitol Hill, and she is seen as an instrumental force who lobbied for Wray’s confirmation to the FBI director job.

HERE IS JILL TYSON’S LETTER TO THE HOMELAND SECURITY COMMITTEE: “This responds to your letter, dated December 17, 2019, to the Federal Bureau of Investigation (FBI) regarding Racially or Ethnically Motivated Violent Extremism (RMVE). We apologize for the delay in responding to your letter. In late 2017, the FBI discontinued using the term “Black Identity Extremism.” As a result, the FBI’s Consolidated Strategy Guide for Fiscal Year (FY) 2020 does not use that term, and the only reference to the term in the FY20 19 Consolidated Strategy Guide is a footnote indicating that the term is no longer utilized by the FBI. As detailed below, the FBI has updated its terminology and currently uses the term “Racially or Ethnically Motivated Violent Extremism.”

The FBI continually challenges, reviews, and evaluates intelligence to ensure the appropriate identification and categorization of each threat. This is an iterative process, based on analysis of a threat’s impact and mitigation efforts, and is refreshed annually. During the annual review in 2018, the FBI’s Counterterrorism Division elected to revise the categories of domestic The Honorable Bennie G. Thompson The Honorable Cedric Richmond terrorism threats emanating from those who use or promote violence to further one of many ideologies rooted in racial bias. The term “Racially or Ethnically Motivated Violent Extremism” came about as a result of intelligence analysts identifying similar characteristics in the driving factors of the threat actors involved across ideological lines. Discussions with Special Agents in Charge and subject matter experts from FBI Field Offices across the country, combined with input from management at FBI Headquarters, ultimately led the FBI to this decision. As such, for the last two years, the FBI has described domestic terrorism threat actors motivated by an ideological justification for violence related to race and ethnicity as RMVEs. The FBI has considered and continues to consider violent extremism motivated by any racial bias a high priority. In fact, this threat is one the FBI considers among the most serious terrorism threats posed to the United States.

Of note, in early 2019, the FBI engaged directly with the National Organization of Black Law Enforcement (NOBLE) Executive Board to explain the FBI’s internal review process that resulted in the terminology change and to request their feedback as critical law enforcement partners. One of the FBI’s senior executives later spoke at a NOBLE conference regarding these updated threat categories. The FBI also offered to provide a similar briefing to the Congressional Black Caucus (CBC) in early 2019. The FBI believes RMVE is an appropriate term because it focuses on violence and motivation in order to label the threat, rather than any First Amendment-protected activity. In consultation with United States Intelligence Community partners and other partners at the National Security Council, the FBI has attempted to effectively integrate all types of racially or ethnically motivated violence into one threat category that allows the FBI to comprehensively mitigate the threat. This revised category allows the FBI to address the current threat and to evolve based upon emerging trends. Threat-naming conventions do not compromise the FBI’s ability to understand, report on, and counter sub-sections of this threat category. For example, as FBI executives and subject matter experts have noted in congressional briefings and hearings, slightly more than half of the FBI’s domestic terrorism investigations at any given time are classified as RMVE cases. 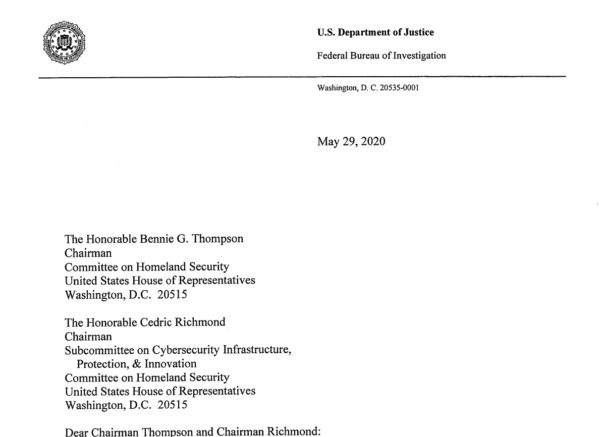 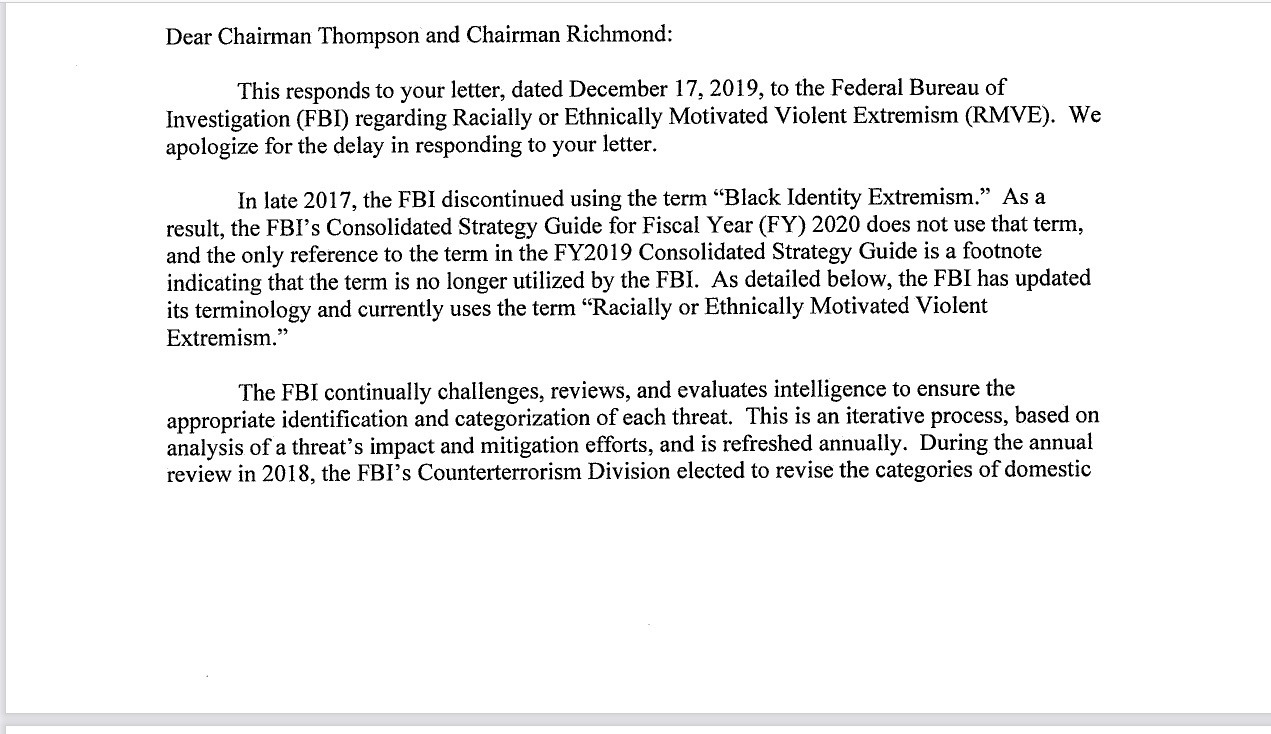 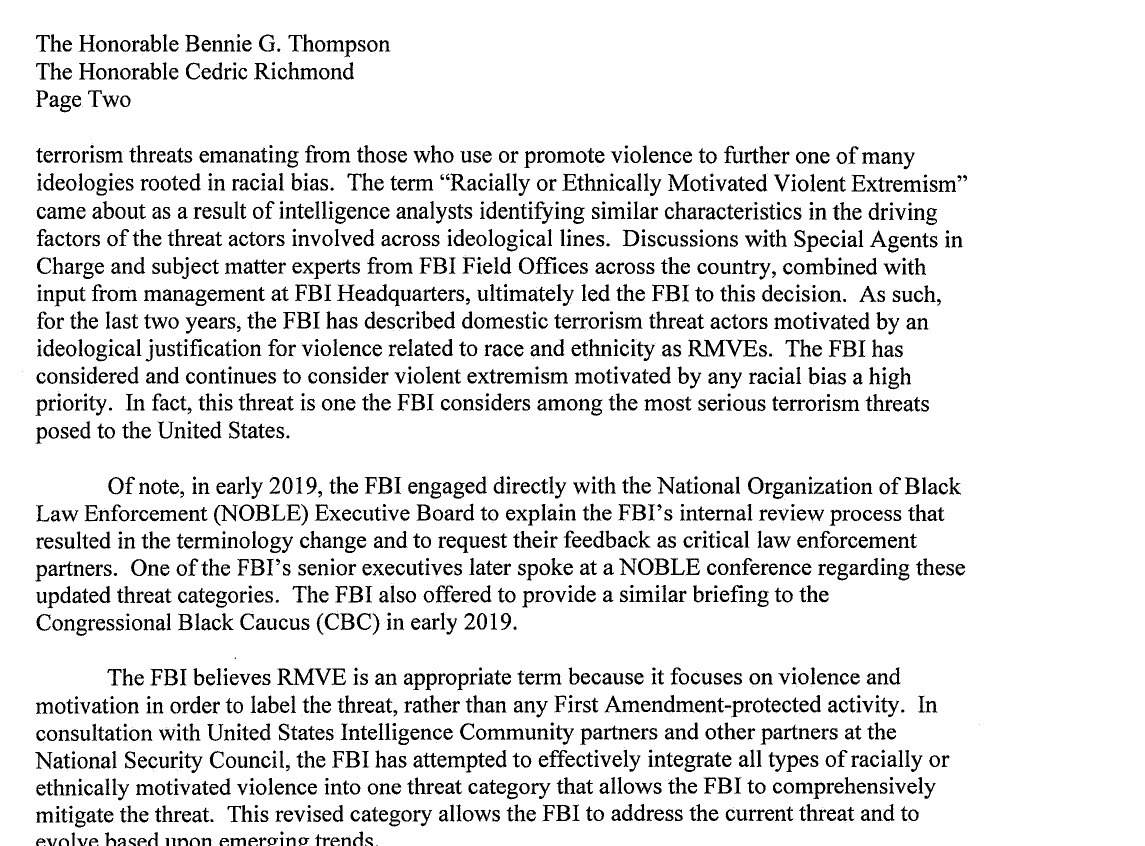 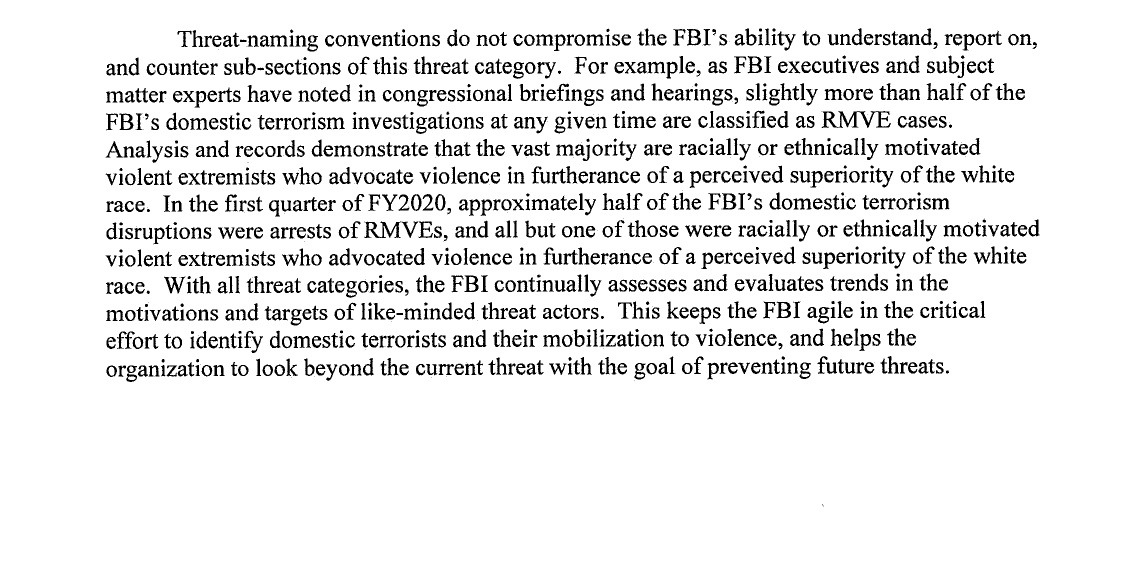 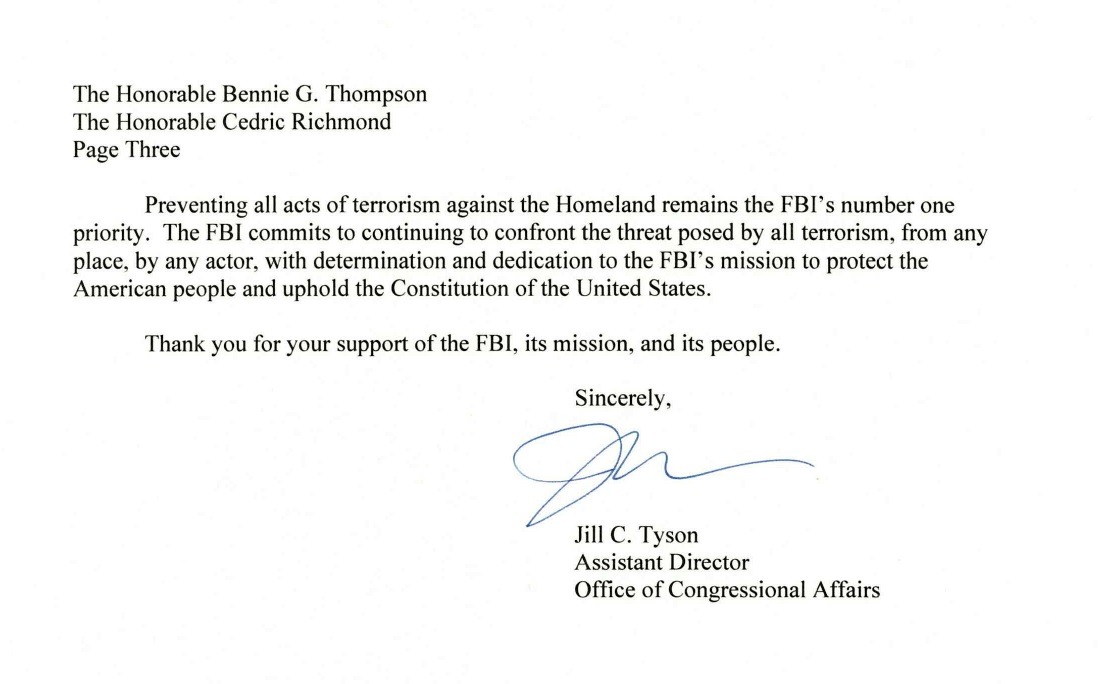