New Crimes On The Horizon?

In response to the January 6 election integrity protest at the U.S. Capitol, a report funded by the Department of Homeland Security (DHS) urges Congress and the U.S. federal government to “create crimes of domestic terrorism” to increase prosecutions of so-called domestic terrorists. The Program on Extremism at George Washington University published a 2021 report by Bennett Clifford entitled “RACIALLY/ETHNICALLY MOTIVATED VIOLENT EXTREMIST (RMVE) ATTACK PLANNING AND UNITED STATES FEDERAL RESPONSE, 2014-2019.” The report uses the acronym “RMVE” to refer to “Racially Motivated Violent Extremists.” The report advocates for the invention of new crimes including ” “conspiracy” charges in response to “the January 6, 2021 storming of the U.S. Capitol by various domestic violent extremists.”

According to the report (emphasis added): “The Program on Extremism at George Washington University provides analysis on issues related to violent and non-violent extremism. The Program spearheads innovative and thoughtful academic inquiry, producing empirical work that strengthens extremism research as a distinct field of study. The Program aims to develop pragmatic policy solutions that resonate with policymakers, civic leaders, and the general public. The views and conclusions contained in this document are those of the authors and should not be interpreted as necessarily representing the official policies, either expressed or implied, of the U.S. Department of Homeland Security or George Washington University. This material is based upon work supported by the U.S. Department of Homeland Security under Grant Award Number 20STTPC00001‐01.”

In 2020, a press release stated that “The George Washington University Program on Extremism will be part of a new consortium of academic, industry, government and laboratory partners throughout the country to support the U.S. Department of Homeland Security with research focused on extremism and counterterrorism, the university announced today. The new National Counterterrorism Innovation, Technology and Education Center of Excellence will include 17 partner organizations. The University of Nebraska at Omaha will host the center, which will be funded by a 10-year, $36 million DHS grant. The center will work closely with the department’s operational units to generate research and educate current and future homeland security leaders on the latest methods of counterterrorism. The center will focus on solutions that help prevent terror attacks by countering the radicalization of people and their mobilization to violence.”

The report states on page 26 (emphasis added): “As federal law enforcement practitioners and policymakers consider revamping the DOJ and FBI’s approach to RMVE and other domestic violent extremist movements, these findings can help structure policies that are designed to improve capacity, efficiency, and violence prevention. First, this paper finds that although a material support statute for domestic terrorist organizations akin to 18 U.S. Code §2339B may be considered on other grounds, it would be unlikely to drastically improve the federal response to RMVE attack planners. Even if federal authorities were able to devise a structured, constitutional designation process and a resultant list of domestic terrorist organizations, the most lethal attackers in the study were not formally affiliated or connected in any material way to an RMVE organization. The activities that they conducted during the period of their attack planning were largely legal, and most would not have cleared any meaningful criminal threshold set by federal terrorism laws. Other forms of RMVE activities— especially foreign fighter travel and financing—may be good candidates for prosecution under a material support statute, but it would be largely inapplicable to most cases of RMVEs who are planning terrorist attacks in the United States.

Instead, to prevent terrorist attacks committed by RMVE, Congress and federal law enforcement may consider shifts in its allocation of investigative resources and create crimes of domestic terrorism that are more specific to attack planning. First, although the FBI is largely opaque about the precise breakdown of resources, internal and external sources claim there are imbalances of staffpower, fiscal resources, investigative tools and sources, career opportunities, and bureaucratic priorities between the FBI squads tasked with countering international terrorism and those tasked with domestic counterterrorism.

After recent events—particularly the January 6, 2021 storming of the U.S. Capitol by various domestic violent extremists—the Bureau now claims that domestic violent extremism outweighs homegrown violent extremism and international terrorism as the top terrorism threats facing the country. Ensuring that available resources actively match the scope of the threat for each category of terrorism can help fix investigative gaps by providing federal agents the tools they need to identify and interdict RMVEs, preventing them from conducting mass-casualty attacks and other violent acts.

Second, the FBI Joint Terrorism Taskforces and Department of Homeland Security Fusion Centers who engage with state, local, and community partners should prioritize outreach to local faith communities, particularly synagogues, mosques, and historically Black religious institutions…If deemed necessary by a longer-term review of federal law enforcement’s counterterrorism approach, Congress may also consider the provision of additional statutory authority to the FBI and DOJ in the form of a federal crime of domestic terrorism.

One proposal by former Acting Assistant Attorney General for National Security Mary McCord argues that rather than modeling new crimes on the material support statute, they should be based on the definition of “acts of terrorism transcending international boundaries” stipulated in to 18 U.S. Code §2332b, creating a separate subcategory for acts of terrorism in the U.S. without an international connection. Under this modification, “killing, kidnapping, maiming, committing assault resulting in serious bodily injury or assault with a dangerous weapon, or destroying property” with the intent to intimidate or coerce a civilian population or influence government policy would be prosecutable as a federal crime of terrorism without the need for a material support statute or a designated organizations list. This proposed statutory change could entail three major impacts on the way federal authorities investigate and prosecute RMVE cases.

First, unlike the current patchwork of laws used to prosecute domestic terrorists in many cases, this statute would also include charges related to conspiracy and attempt to commit domestic terrorism. Because federal agents could start their investigation when they gather evidence that an individual is planning by whichever means to conduct an RMVE inspired attack, they would theoretically be able to intervene much earlier and in a greater variety of cases.

Second, from a signaling standpoint, the statute would help assuage the public and key community stakeholders that federal law enforcement is committed to addressing domestic terrorism in the same way as international terrorism, by distinctly applying an ideologically neutral crime of federal terrorism to each type of case. Finally, and perhaps most importantly, even in cases that do not involve these charges, prosecutors who believe that a convicted individual has a nexus to domestic terrorism could use a modified federal terrorism statute to apply for a sentencing enhancement.” 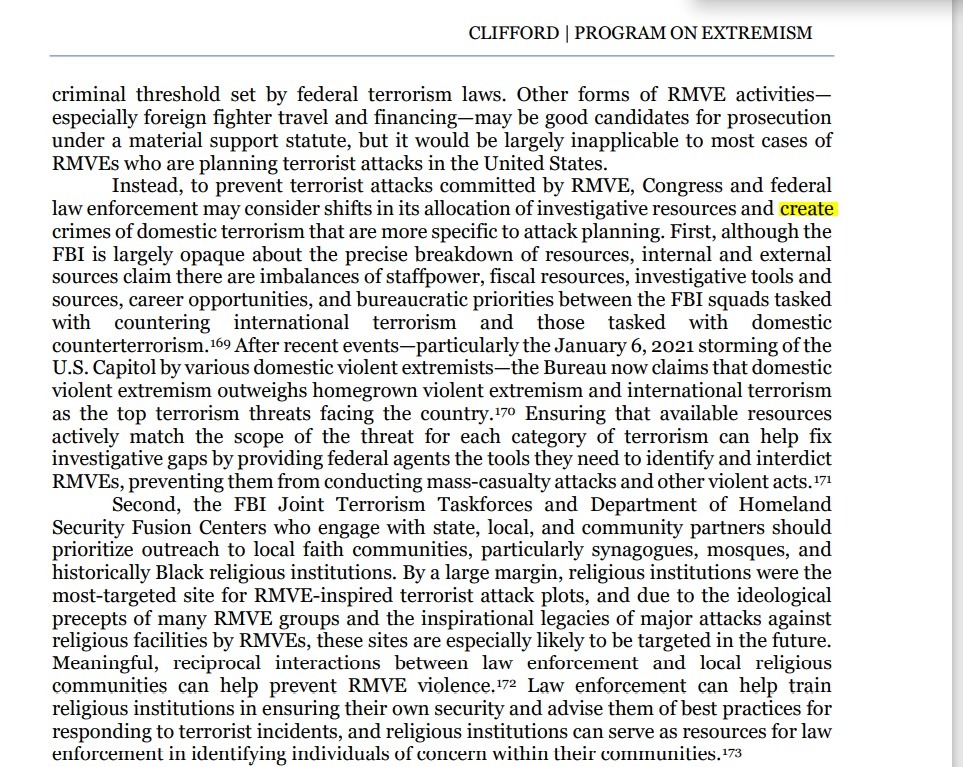