White People Poised to Become Minority In Numerous States, According To Study

White People Poised to Become Minority In Numerous States, According To Study

Why Is America A Global Strip Mall Labor Colony?

Numerous states are poised to have White people become the minority in their states in the next decade, according to new research from the property information company NeighborWho. States including Georgia, Florida, New Jersey, New York and Arizona could soon join the list of states where White people lose majority status as America increasingly becomes a global strip-mall labor colony of Davos. Anti-White programming is evident in all sectors of our society, and now the numbers are proving that racial replacement definitely exists.

NeighborWho states: “As of 2020, only three states had majority-minority populations. Officially, along with the District of Columbia, there are three states—California, Hawaii and Maryland—in which no one racial classification population occupies the majority. In 2010, this was true for only Hawaii and DC…As of 2021, we estimate three more states crossed the line. Based on the growth trends over the past 10 years, we project three more states should be added to the majority-minority list: Nevada, New Mexico and Texas….Five more states are projected to cross the line this decade. Based on current trends, we project Georgia (2023), New Jersey (2024), Florida and New York (both 2025) and Arizona (2029) will cross over this threshold before the end of the decade…By 2050, 15 more states are projected to cross over. We estimate a raft of states will become majority-minority between 2030 and 2050: Illinois (2032); Alaska, Delaware, Louisiana and Virginia (2033); Connecticut (2035); Oklahoma and Washington (2036); Massachusetts (2039); Colorado, Mississippi and North Carolina (2040); Rhode Island (2042); Oregon (2048); and Arkansas (2050).”

The report also stated that “In 2020, 61.6% of the population identifies as “white,” down from 72.4% in 2010…Also, white Americans appear to be getting older and having fewer children. According to Pew Research Center, the most common age for white Americans is 58, which is more than double for any other racial group.” 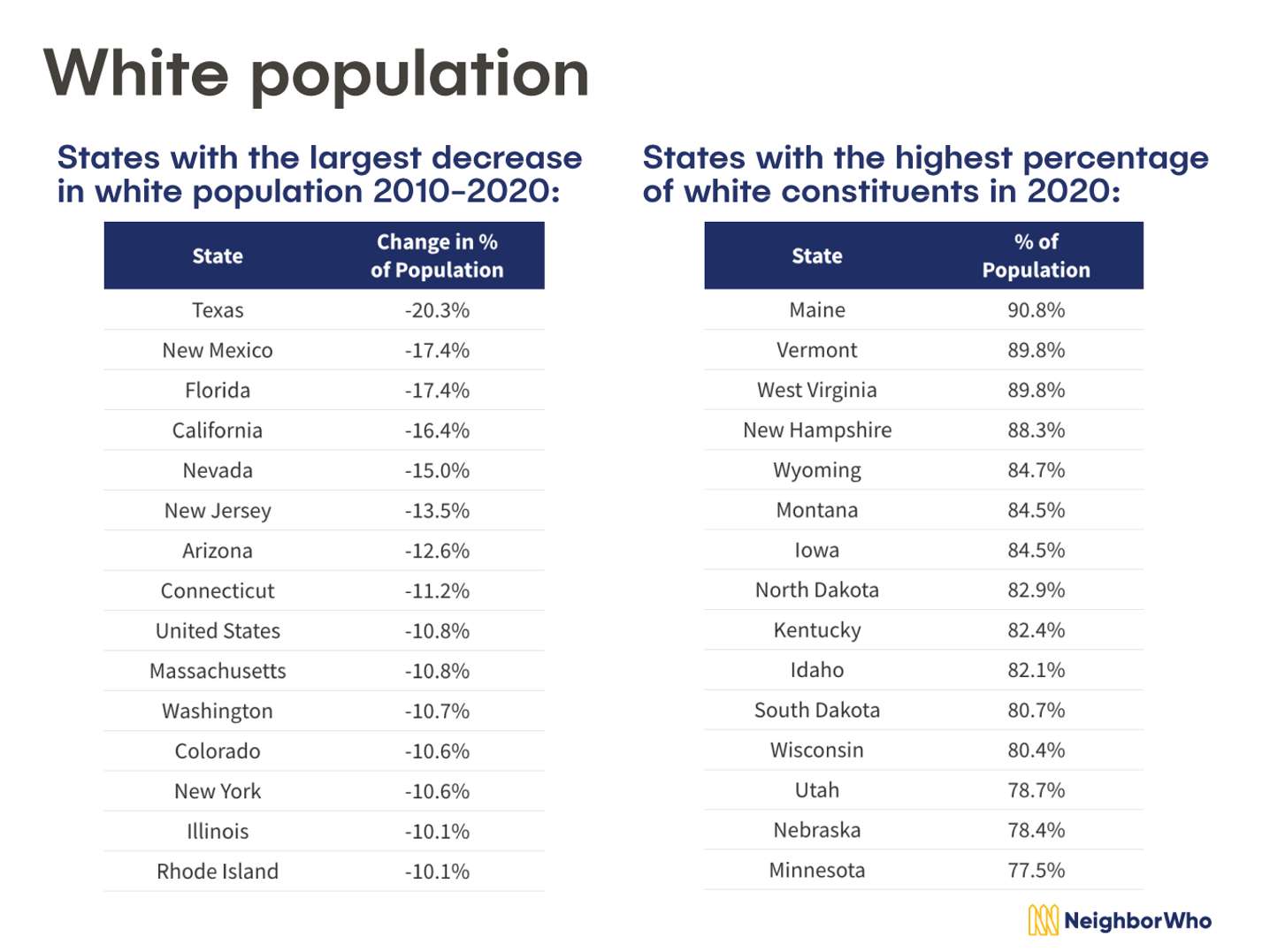 Morgan Stanley provided a job description for its “2022 Investment Banking Sophomore Summer Analyst Program,” in which the firm clearly states: “Morgan Stanley prides itself on fostering an environment that promotes diverse talents and perspectives. One way we demonstrate our commitment to diversity is through the Sophomore Summer Program. This program is an integral part of our diversity recruiting efforts helping to attract Black, Hispanic, Native American, Female and/or LGBTQ college sophomores.”

A message circulated by Wall Street insiders on social media appears to show Morgan Stanley outright rejecting a straight white male. The message states: “Hi Nicholas — Thanks for reaching out! All Morgan Stanley Sophomore Summer Programs are an integral part of our diversity recruiting efforts to attract Black, Hispanic, Native American, Female and/or LGBTQ+ college sophomores. For that reason, all applicants that do not identify under the criteria listed above are unfortunately ineligible for the program. Please let me know of any questions! Thanks, Olivia.” Morgan Stanley’s campus recruiter is named Olivia Schember. 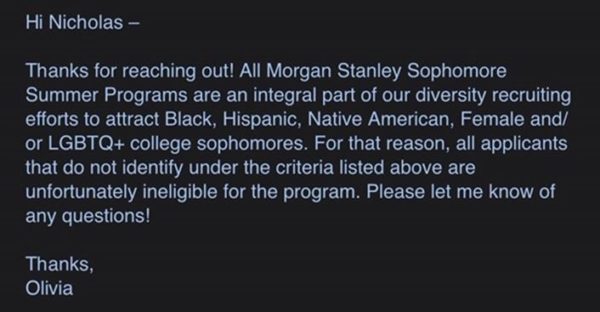 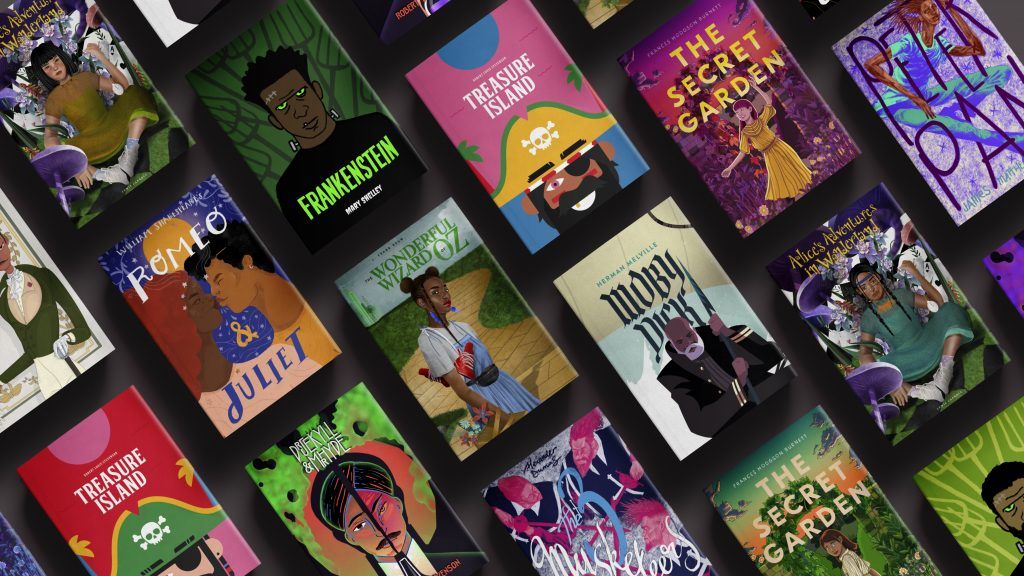 In academia, anti-white racism is all-consuming. Pennsylvania State University is absurdly standing behind a professor named Sam Richards who humiliated a white male student in a lecture on supposed white privilege. Meanwhile, Hollywood entertainment is a constant anti-white propaganda session:

This is what entertainment is now. pic.twitter.com/XvcgyEMOTR

What impact is anti-white propaganda having in our society as Western nations descend into frenzied Anarcho-Tyranny?

The media remains silent on this story.https://t.co/xAPiPndxkq

Obvious anti-white bias and humiliation rituals extend into the judicial realm. As NATIONAL FILE reported: Patriot grandma from Indiana Anna Morgan-Lloyd, 49, received the first criminal sentence stemming from the January 6 pro-election integrity protest at the U.S. Capitol in Washington, D.C., where police allowed protesters into the building. To ease her sentencing, Morgan-Lloyd wrote a little movie report on the Holocaust drama Schindler’s List and the anti-racism film Just Mercy and submitted it to the presiding judge on her lawyer’s instructions. Welcome to the progressive criminal justice system in modern America! 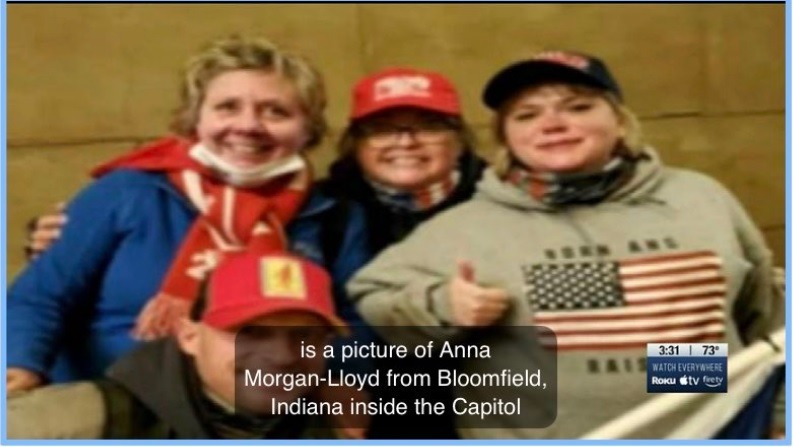