Virginia’s new Republican Attorney General, Jason Miyares has issued a legal opinion that bars colleges and universities from forcing students to accept the COVID-19 jab as a condition for in-person enrollment.

“Attorney General Miyares has issued a legal opinion that Virginia’s state institutions of higher education cannot require the COVID-19 vaccine as a general condition of students’ enrollment or in-person attendance,” an announcement from the Virginia Attorney General’s Office read on Friday.

Some Virginia schools, like Northern Virginia’s George Mason University, have already mandated the COVID shots among in-person students and enrollees, leading to serious concerns over what powers these institutions actually possess and how much of students’ lives they can actually control, prompting hundreds of students to disenroll.

After Miyares’ opinion went public on Friday, George Mason’s policy changed to reflect the tiny piece of freedom that had been given back to their students, saying now that COVID vaccines are “strongly encouraged” but not required.

It is unclear if students who dis-enrolled over their refusal to comply with the vaccine mandate will be offered their spots in class back, now that they have been vindicated.

The opinion from Miyares follows executive actions from newly-minted Governor Glenn Youngkin, which removed mask mandates from the state’s public schools, allowing parents and children to decide what’s best for themselves.

In Miyares’ AG opinion, he wrote that while individual schools have no power to mandate the experimental medical treatments among their students, there is “no question” that the state’s General Assembly could mandate COVID-19 vaccinations as a pre-requisite for in-person enrollment in state schools, though it seems highly unlikely that such a mandate could pass through the GOP-controlled House of Delegates, let alone receive the signature of new GOP Governor Glenn Youngkin.

As with mail-in voting and other changes to the 2020 Election process, those who have raced to enact COVID restrictions and vaccine mandates have often done so in lieu of their state legislature, bringing up serious legal questions over the role of bureaucratic individuals and institutions, as well as executive branch elected officials who have oftentimes gone around their state legislature in altering state code.

“Attorney General Miyares highlights in the opinion that ‘as recognized in the prior opinion, [t]here is no question that the General Assembly could enact a statute requiring the COVID-19 vaccine for in-person school attendance.’ As of this writing, it has not done so. Over the course of the COVID-19 pandemic, the General Assembly has amended other statues [sic] to address pandemic-related issues,” the AG’s announcement went on to say.

Miyares’ action on collegiate vaccine mandates comes following a set of inauguration day executive orders and actions from new GOP Governor Glenn Youngkin, one of which lifted the mask mandates previously enforced on Virginia’s schoolchildren. Left-wing municipalities and advocacy groups, like Virginia’s teachers’ union, have vowed to fight the “unconstitutional” order in court, saying that not forcing children to cover their faces in schools violates the constitutions of both Virginia and the United States. 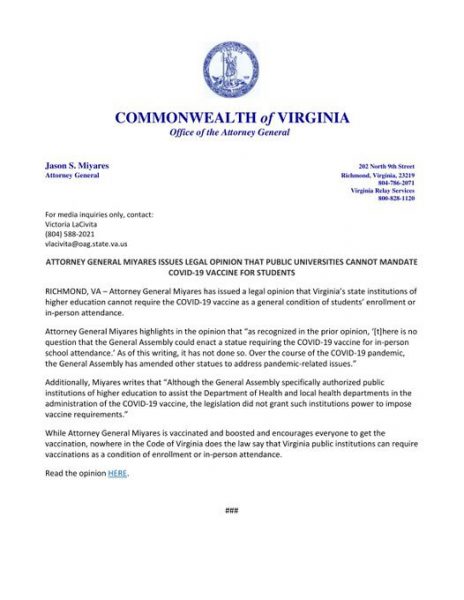