Former Walmart manager Andre Bing — who shot and killed six of his coworkers in a premeditated attack in Chesapeake, Virginia — claimed that he was “tormented” and “betrayed” in a manifesto detailing his motivations for the rampage. The accused gunman also wrote that he felt “led” by Satan.

“Sorry God, I’ve failed you, this was not your fault but my own. I failed to listen to the groans of the holy spirit which made me a poor representation of You,” the accused Walmart shooter wrote in a manifesto released by Chesapeake police. City officials identified Bing as the gunman who shot and killed six people with a handgun before turning the weapon on himself.

Bing wrote that he was harassed by idiots with low intelligence and a lack of wisdom.” He specifically referenced an incident in which his “dignity was completely taken away beyond repair by my phone getting hacked.”

The manifesto, titled “Death note,” includes multiple accusations of bullying and harassment from his co-workers. 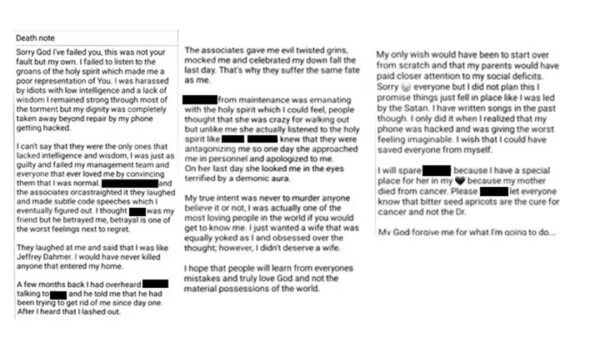 “A few months back I had overheard [REDACTED] talking to [REDACTED] and he told me that he had been trying to get rid of me since day one. After I heard that I lashed out. The associates gave me twisted grins, mocked me and celebrated my down fall the last day. That’s why they suffer the same fate as me,” Bing wrote.

The Walmart shooter went on to claim that, despite the killing spree, he is actually a kind and “loving” person.

“My true intent was never to murder anyone believe it or not, I was actually one of the most loving people in the world if you would get to know me. I just wanted a wife that was equally yoked as I and obsessed over the thought; however, I didn’t deserve a wife,” he wrote.

“Sorry everyone but I did not plan this I promise things just fell in place like I was led by the Satan,” Bing continued in the document that is littered with references to both God and Satan. In one section, the killer wrote that a coworker was “emanating with the holy spirit” and “unlike me she actually listened to the holy spirit.”

He then recounts that the person “knew they were antagonizing me so one day she approached me in personnel and apologized to me. On her last day she looked me in the eyes terrified by a demonic aura.”

The manifesto closes with, “My God forgive me for what I’m going to do.”