Luria took a page from the Nazi playbook, accusing Bell of peddling a "Big Lie"

Democrat incumbent Elaine Luria is parroting Nazi Party propaganda in her attacks against Jarome Bell, dubbing concerns around election fraud as the “Big Lie” while attempting to raise money off of a recently censored tweet from Bell, in which the America First conservative called for nationwide forensic election audits and stiff penalties for convicted election thieves.

As recently reported by National File, America First conservative and candidate for Congress, retired Navy Chief Jarome Bell, was suspended from Twitter – at the behest of Newsweek – after making a post to the platform calling for nationwide election audits and the arrest and trial of election fraudsters. If convicted, Bell said the political thugs should face capital punishment.

After reports of his suspension from Twitter, Virginia’s 2nd District Democrat incumbent, Elaine Luria pounced on the situation, blasting out emails to supporters and constituents in which she condemns election integrity efforts, denies the existence of election fraud and malfeasance, and claims that Bell is an “unhinged, dangerous Trump loyalist.”

“Jarome Bell – one of Elaine’s Republican opponents – is an unhinged, dangerous Trump loyalist,” Luria’s frantic fundraising email reads. “Will you rush a donation today to help Elaine protect Virginia – and the country – from his lunacy?”

Luria went on to parrot 20th century Nazi propaganda, echoing fellow Democrats and GOP establishment members in dubbing claims of election fraud to be the “Big Lie” and even cloaking herself in the garb of fiscal conservatism, telling readers that election audits are a waste of taxpayer money.

“Bell is not only perpetuating Trump’s “Big Lie” of election fraud, he’s taking it even further – suggesting that we execute people for being involved in something that didn’t even happen,” Luria’s email reads.

“Biden won the election – period. Folks like Bell are sowing dangerous doubts in the sanctity of our elections, are encouraging violence, AND are costing states millions of dollars to perform these unnecessary audits,” the email reads before again requesting money from its recipient under the guise of fighting Jarome Bell, Donald Trump, and election integrity.

Jarome Bell blasted Elaine Luria and far-left Democrats in a statement to National File, saying that Nazi-inspired censorship and character assassination campaigns are the racist, radical left’s natural reaction to a black conservative exposing their corruption and calling for the rule of law to be restored all across the Republic.

“This is what white racist liberals do when a black conservative calls for the rule of law,” Bell said. “Only people that are guilty are worried about my statement,” he continued, before going on to accuse Luria of taking part in a treasonous coup against the American people and their duly elected President.

“The Elaine Luria camp has officially become very worried because she is a part of the anti-American coup and I have become her biggest nightmare,” Bell said.

Further highlighting Luria’s fundraising email, Bell indicated that he sensed desperation from the incumbent and her campaign, accusing Luria of trying to “save her ass” and cover her tracks by projecting Democrat misdeeds onto Bell and his fellow conservatives.

“This email is going out from her camp to try and save her ass and defeat me in 2022. The crime and punishment of treason is clear,” said Bell.

“Anyone that knowingly participated in election fraud, which is part of a coup against the United States, committed treason. They try and project who they truly are onto others and hide themselves from their unknowing supporters,” Bell said.

“So I’m now her worst nightmare and I have only begun to fight.” 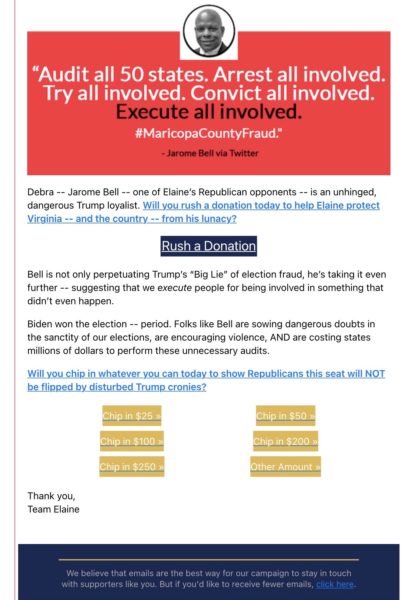