Virginia Democrats wander dangerously close to violating the First Amendment as well as the Second, according to two House candidates.

After the Senate approved a series of gun control measures, the Democrat-led Virginia State House  is now pushing legislation that will make it a Class 1 Misdemeanor to criticize the government with the ability for Richmond authorities to charge any citizen of the state with the crime.

The bill, titled “HB 1627 Threats and harassment of certain officials and property; venue,” would make it a crime for citizens to offer “harassment by computer,” and allow Richmond police to pursue such crimes anywhere in the state.

It appears that, if passed, Virginians who voice their dislike or distrust of the Virginia government via Facebook or Twitter, including the infamous Virginia Gov. Ralph Northam, who was exposed by National File Senior Reporter Patrick Howley of being photographed wearing either blackface or Ku Klux Klan robes in 2019, may be visited by Richmond police.

According to the text of the bill:

If any person, with the intent to coerce, intimidate, or harass any person, shall use a computer or computer network to communicate obscene, vulgar, profane, lewd, lascivious, or indecent language, or make any suggestion or proposal of an obscene nature, or threaten any illegal or immoral act, he shall be is guilty of a Class 1 misdemeanor. A violation of this section may be prosecuted in the jurisdiction in which the communication was made or received or in the City of Richmond if the person subjected to the act is one of the following officials or employees of the Commonwealth: the Governor, Governor-elect, Lieutenant Governor, Lieutenant Governor-elect, Attorney General, or Attorney General-elect, a member or employee of the General Assembly, a justice of the Supreme Court of Virginia, or a judge of the Court of Appeals of Virginia.

There is no definition given of “coerce, intimidate, or harass” in the text of the bill.

Additionally, it is unclear what may constitute “obscene, vulgar, profane, lewd, lascivious, or indecent language.” Nor is it explained what a “suggestion or proposal of an obscene nature” may be.

On Facebook, the wife of Republican House candidate for Virginia’s 7th district Nick Freitas wrote “Wow on cue, now they are after the 1A!”

Tina Freitas continued, “Dems are trying to set up special rules exclusive to the Elite ruling class, to protect themselves from criticism!”

“What is considered harassment? Is Governor Infanticide/KKK Hood trying to avoid being held accountable,” added Freitas. “Are we no longer allowed to demand justice for the alleged rape victims of LG Fairfax? This is some straight up communist censorship!” 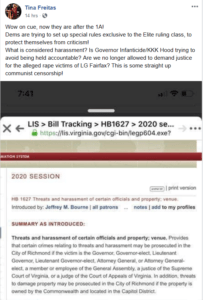 Speaking to National File, Nick Frietas called the bill “potentially problematic” due to the new provision that would allow authorities in Richmond to pursue “computer harassment” crimes anywhere in the state.

“This could potentially create a two tier system, where politicians and members of government could pursue harassment charges that ordinary citizens would not be able to,” said Freitas.

Speaking to National File, Bell said “It’s no surprise that after the last year our Blackface governor Ralph Northam has had he doesn’t want the free citizens of Virginia to be able to criticize him.”

“Similarly, Lt. Gov. Justin Fairfax, who has been credibly accused multiple times of rape by well-educated Democrat women — women who happen to be black who have Ph.Ds. — probably would love to put himself into a protected class,” added Bell.

Bell considers the bill to be an affront to the First Amendment.

“These three stooges at the top of Virginia’s government are nothing more than communists masquerading as Democrats. Today they want to ban certain speech. Tomorrow they’ll want to ban ideas.”

Bell concluded, “For a bunch of people who say they don’t like guns, it’s ironic they keep pushing more bad laws they’ll have to enforce using the business end of a firearm.”

The outrage over the bill comes only days after the massive Lobby Day gun rights rally in Richmond, and one day after Democrats in the Virginia senate advanced stringent red flag law legislation.

McCarthy to Pelosi: Try Impeaching Trump And We Will Remove You As Speaker

VIDEO: Adam Schiff Says We Have to Give Ukraine Weapons So Russia Doesn't Invade America