A black man suspected of a committing a mass shooting brandished his gun at an officer before he was shot. Now, the NAACP says the cop is racist.

The Virginia Beach NAACP is accusing the city’s police department of racism and demanding to be given full investigative and subpoena power over cops after a black suspected mass shooter was shot and killed by an officer while brandishing a weapon along the city’s Oceanfront days ago. The incident was part of a larger series of shootings along the Oceanfront that left 2 dead and at least 8 wounded.

According to the findings of a police investigation, one of the dead, 25-year-old Donovan W. Lynch, was shot by police after brandishing a weapon at officers responding to the violent scene along the Oceanfront. Police say Lynch was suspected of committing a mass shooting.

While VBPD officers are equipped with body cameras, the officer had reportedly neglected to turn his on at the time of the shooting, something many police say is not uncommon in such a rapidly unfolding and dangerous situation, as officers are preoccupied with both personal and public safety.

Lynch was the cousin of Pharrell Williams, the musician and Democrat activist who has championed a number of Governor Ralph Northam’s left-wing initiatives in recent years.

Also dead at the scene was 29-year-old “Bad Girls Club” star Deshayla Harris, an innocent bystander struck down by one of the shooters.

In a statement released after the shootings, the Virginia Beach NAACP made no mention of the arrests of 3 suspects in the shootings, all of whom are black, instead opting to accuse police, who they say “shot down” one of the city’s black residents, of racism. The statement also calls for the establishment of a civilian review board with investigative and subpoena power over the police department.

”The Virginia Beach Branch NAACP is distressed regarding the recent shootings,” the statement reads. “We are not surprised of the revelation that the body camera of the officer involved in the death of Mr. Lynch was not activated.”

The group went on to accuse the officer who shot Lynch of engaging in a potential coverup, saying that because “Lynch is not here to tell his side…the officer involved has no reason to be forthcoming about any facts that places him in an adverse light.”

In calling for the establishment of a civilian review board with investigative and subpoena power over the police, the Virginia Beach NAACP say they are also seeking the implementation of a use of force continuum, the ability to review the personnel records of officers, and an additional statewide review board “for officers who use deadly force-tied to officer recertification credentials.”

”We will not stand by silently while an African American citizen has been shot down in this ‘Resort City,’” the statement says in closing.

Read the NAACP’s statement below: 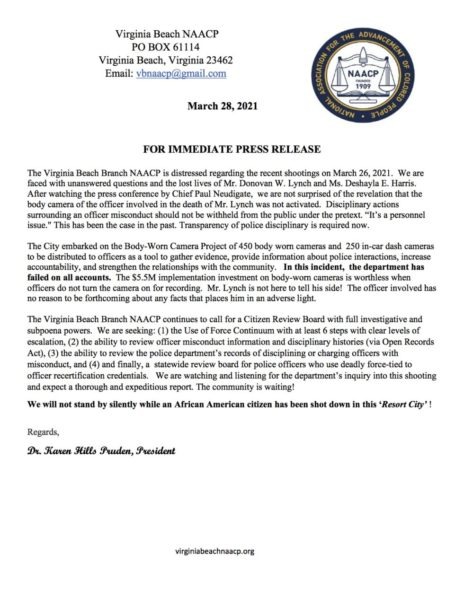