Black Lives Matter did not fare well when they tried to shut down a Virginia Beach mall.

A group of Black Lives Matter militants attempted to storm Virginia Beach’s Lynnhaven Mall on Monday night, only to be quickly routed by security guards and local police.

The action came following a caught-on-video incident two days prior in which Jamar Mackey, a black man, was briefly detained by officers of the Virginia Beach Police Department because he matched the description of a suspected credit card fraudster.

Following local media reports on the incident and eventual input from Shaun King and rapper T.I. via social media, the Black Lives Matter 757 chapter, which has been involved in numerous riots and violent clashes across Virginia announced that it would “be shutting down Lynnhaven Mall,” going on to demand that the City of Virginia Beach install a “citizens overview panel” with investigative and subpoena power over the city.

When the group arrived to “shut down” the mall, they were met by numerous security and police officers, who brought a swift end to the chants of “black lives matter” filling the food court where the incident took place.

“Just now, a group of Black Lives Matter protestors demonstrated at Lynnhaven Mall, where Jamar Mackey was detained Saturday,” Evan Watson of Channel 13 News tweeted ahead of 9 PM Monday night. “Security and police officers removed them from the private property, walking them to the parking lot.”

Just now, a group of Black Lives Matter protesters demonstrated at Lynnhaven Mall, where Jamar Mackey was detained Saturday. Security and police officers removed them from the private property, walking them to the parking lot. #13NewsNow pic.twitter.com/svGaYFsXke

The scene briefly continued outside the mall, with roughly 20 would-be protestors heckling police officers and mall security on their way out, finally heading for their vehicles after being repeatedly threatened with arrest.

And finally, as the protesters got in their cars. A Virginia Beach Police officer walked around telling them (and us) “If you remain on the property you will be issued a citation for trespassing.”

The BLM protesters left after that #13NewsNow pic.twitter.com/gLFeWrPfZo

Following the failed protest, Black Lives Matter 757 took to social media lamenting mall management’s response, claiming that the manager of the mall had “refused to acknowledge’ that black lives matter, and had also “refused a civilized discussion.” The group now says that they will be organizing a boycott, asking supporters to stop spending the “black dollar” at Lynnhaven Mall. 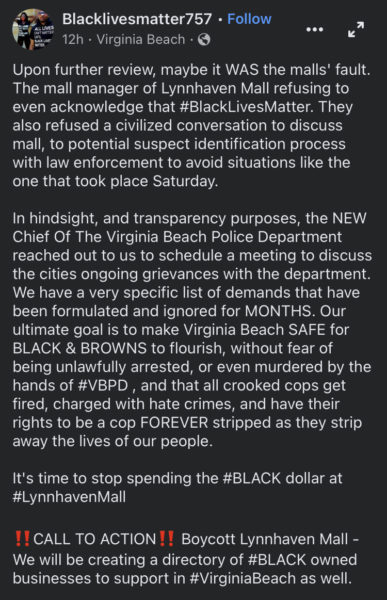