The House Judiciary Committee will interview former Federal Bureau of Investigation (FBI) Counterterrorism Division Assistant Director Jill Sanborn, on December 2nd in regard to allegations of politicization of the bureau.  Biden’s FBI has conducted, in the words of one whistleblower, “heavy-handed” raids on the political right and Christian targets while ignoring far-left violence, such as Antifa activity and fire-bombings of pro-life outlets, The allegation that the FBI employed falsified inflation of domestic terrorism statistics for a political agenda will also be discussed in the interview.

“Your attorneys have maintained that a forthcoming letter from the FBI will fully respond to our request and obviate the need for your testimony. You should know, however, that we do not agree with this assertion,” the congressmen wrote.

“Your attorneys have also suggested that the FBI must approve your appearance for a transcribed interview. You should be aware that, here too, we do not share your attorneys’ view,” the legislators said. “Every federal employee, and former employee, has a right to speak with Congress without interference, intimidation, or obstruction from his or her employing agency.”

“Because you are represented by personal counsel in this matter, agency counsel will not be permitted to attend the interview,” the Committee on the Judiciary wrote.

The FBI made a statement referring to “domestic violence extremists” on Thursday.

“The threat posted by domestic violence extremists is persistent, evolving, and deadly. The FBI’s authority to investigate a case as domestic terrorism requires the existence of a potential criminal federal violation, the unlawful use or threat of force or violence, and ideological motivation,” the FBI claimed.

“The motivation behind threats of acts of force or violence in violation of federal criminal law is not always readily apparent, but is often discovered during the course of an investigation,” the FBI spokesperson added. 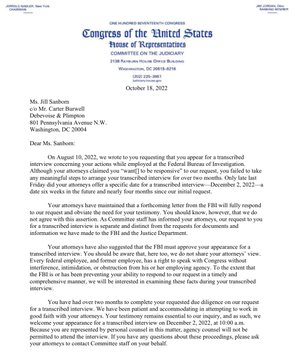 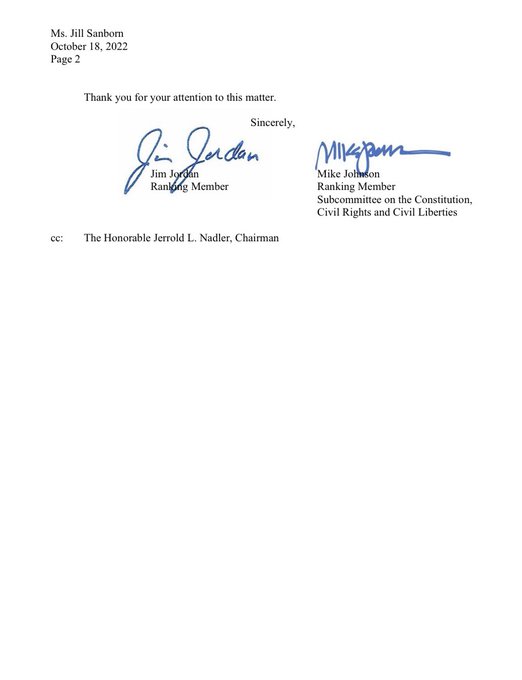 The FBI has been under heavy criticism since the raid on former President Trump’s property at Mar-A-Lago. Criticism has also arisen over the arrest of Mark Houck, a pro-life activist whose initial violation was thrown out of Philadelphia District Court before the Department of Justice (DOJ) used it as a means to raid his property.

“The kids were all just screaming. It was all very scary and traumatic,” Houck’s wife, Ryan-Marie, said.

Houck allegedly pushed a pro-abortion activist after the man he made “crude, inappropriate, and disgusting” comments and entered the personal space of his son. The uninjured man’s attempt to sue was tossed in Philadelphia court.

The FBI and the DOJ found Houck in violation of the Freedom of Access to Clinic Entrance (FACE) Act 1994, which criminalizes the interference of the provision of reproductive health services.

Much like the Houck case, the FBI has participated in what many describe as a “two-tiered justice system” in which enemies of the political left are ruthlessly persecuted.

While the recent trend is perhaps unprecedented, the Biden Administration is not the first to weaponize the FBI.

In the wake of 9/11, the FBI went after former Middle Eastern language translator, Sibel Edmonds, after she repeatedly reported faulty, misreported, or unreported intelligence to her superiors which could have prevented the terrorist attacks that resulted in the deaths of some 3,000 innocent lives.

Then-Attorney General, John Ashcroft, invoked the ‘state secrets privilege’ in an effort to silence Edmonds, an experience which Edmonds relayed in her book, Classified Woman.

It is evident that the politicization and weaponization of the domestic intelligence and law enforcement agency that is the FBI did not begin with the Biden Administration.

“To the extent that the FBI is or has been preventing your ability to respond to our request in a timely and comprehensive manner, we will be interested in examining these facts during your transcribed interview,” Congressman Jordan (R-OH) and Congressman Johnson (R-LA) stated in their letter to Sanborn.