United Kingdom Home Secretary Priti Patel said in the House of Commons that British media should not refer to illegal immigrants as “migrants” or use other “dehumanising” language.

As the UK is facing a crippling increase in the number of illegal migrants making the crossing over the English Channel in boats, the debate has now instead turned to the “dehumanising” language used by media to report on the migrants, after 30 of them died when attempting to cross earlier this week.

Speaking to Home Secretary Priti Patel, seen as one of the most anti-illegal immigration members of the Conservative Party, and whose department is in charge of immigration, Brendan O’Hara, the SNP MP, said that he was “appalled” to see the BBC report that 30 “migrants” had drowned.

“Migrants don’t drown. People drown. Men, women and children drown,” O’Hara said, asking Patel if she would join him in asking “the BBC News editorial team and any other [media] outlet thinking of using that term to reflect on their use of such dehumanising language and afford these poor people the respect that they deserve?”

Surprisingly, Patel agreed. “Even during the Afghan operations and Op Pitting [the UK airlift operation from Kabul after the capital fell to the Taliban], I heard a lot of language that quite frankly seemed to be inappropriate around people who were fleeing,” Patel said. “So yes, I will.”

As National File reported, even the Border Force themselves are resisting any plans to crack down on illegal immigration, with the unions looking into a judicial review for the tactic of pushing back migrant boats. “PCS is in consultation with its members and a number have raised direct concerns about the pushback tactic – the safety and if it is legal,” said Kevin Mills, the PCS union’s lead for Border Force.

“If someone dies, it won’t be Priti Patel taking the body out of the water. And to say that the officers concerned won’t be prosecuted does not help our members’ mental health.”

Over 23,000 migrants have crossed into the UK using boats over the English Channel, with a record number of 1,185 making the crossing in a single day earlier this month. These numbers are an almost three-fold increase since National File filmed the groundbreaking documentary, “Destination Dover: Migrants in the Channel”, in October 2020.

At the end of last year, just over 8,000 illegal migrants had made the dangerous crossing, which although now seem small in comparison, were shocking figures at the time. 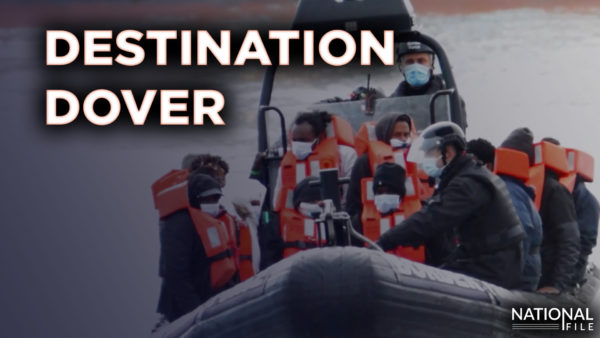