So long as he doesn't suppress my First Amendment right to speak out against Netanyahu's racist and inhumane policies. The Palestinian people deserve equality and justice. https://t.co/SLhT3yYc4i

Tlaib is the member of the the Squad – a group of self-described “democratic socialists” in the House of Representatives – and a proponent of the BDS movement.

READ MORE: Sanders to ‘The Squad’: Electing Biden/Harris Is Just the Beginning

BDS stands for Boycott, Divestment and Sanctions; the movement asserts that Israel – the Middle East’s only democracy – is an illegitimate apartheid state. They seek to undermine Israel’s diplomatic standing through boycotts of Israeli goods, academics and cultural exchange programs.

Tlaib has previously faced criticism for writing in Nation of Islam’s flagship magazine The Final Call. The NOI is widely regarded as an antisemitic cult with no connection to mainstream Sunni or Shia Islam.

In 2009, she received a Community Service Award from the Council on American Islamic Relations which, according to the Anti-Defamation League, is arguably a front for the terrorist group Hamas.

Reactions on left-wing Twitter to Tlaib’s reaction were mostly positive, with over 14,400 likes and over 1500 retweets.

Right-wing commentators reacted with a mixture humor, sarcasm and disgust. Dov Hikind, founder of Americans Against Antisemitism, tweeted, “Welp, as long as that Judische pick doesn’t stop me from focusing my hatred on one country, Israel, then he’s a good Jew!”

Biden names a Jew to his cabinet

What’s Rashida’s response?! “Welp, as long as that Judische pick doesn’t stop me from focusing my hatred on one country, Israel, then he’s a good Jew!”

It’s not your 1A right you’re trying to protect but your vile Jew-hatred!

You can just say you're worried because he's Jewish… https://t.co/TdZL8BwrhB

Fellow squad member Ilhan Omar (D-MN) caused a diplomatic incident in 2019 when she suggested in a tweet that American political support for Israel was motivated by Jewish money.

Republicans in Congress advanced a resolution in response to condemn antisemitism, which Democrats amended to condemn all forms of racism before passing it. To date, Democratic leadership has not sanctioned any member of the Squad for remarks which many have termed “antisemitic”. 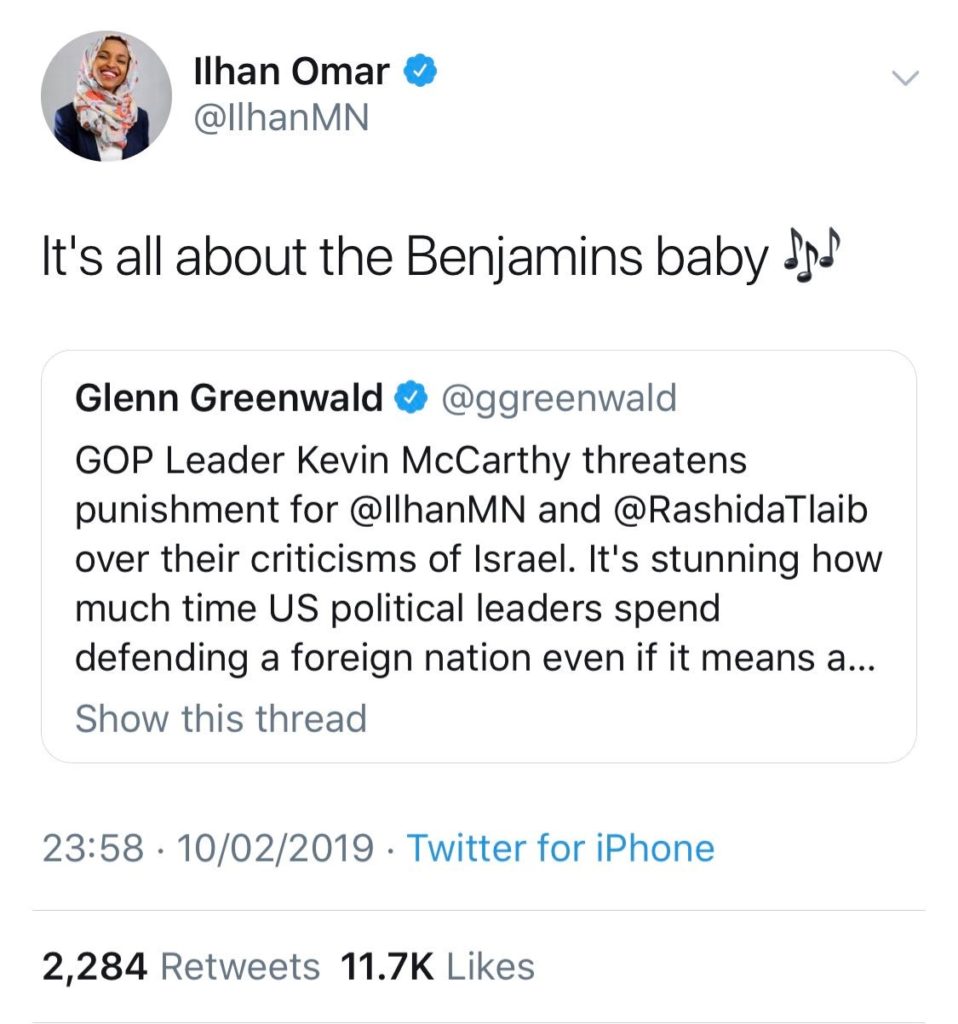 It is unclear how Tlaib believes the Secretary of State – or any federal official – would have the authority to limit domestic political speech under the First Amendment of the U.S. Constitution.

Anthony Blinken is an American citizen born in New York City. He served as U.S. Deputy Secretary of State and Deputy National Security Adviser in the Obama administration. He has no obvious ties to Israel beyond being Jewish.