Ivan Raiklin has a plan for contesting the fraudulent election, which he posted on his Twitter account.

One constitutional lawyer has a plan for fighting this year’s election fraud, which he explained in great detail on his Twitter account.

“Here is what the US Constitution, Title 3 of the US Code and #WeThePeople demand occur over the next month,” Ivan Raiklin said, attaching a graphic.

The graphic lays out a serious of challenges, both in court and in Congress, which the GOP and supporters of President Donald J. Trump could execute in order to get to the bottom of exactly what happened on November 3.

Here is a larger version of the graphic: 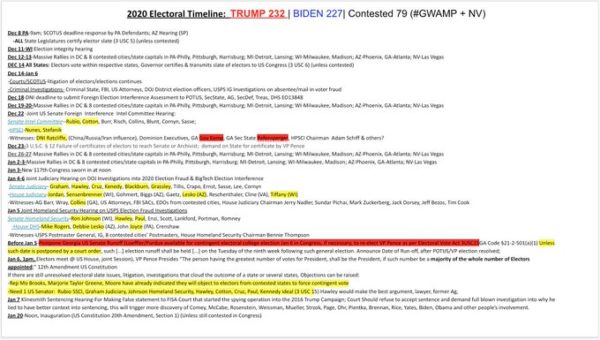 The first step, according to Raiklin, is for the Supreme Court to rule in favor of Rep. Mike Kelly (R-PA), who brought a lawsuit on behalf of the Trump campaign claiming that a 2019 law passed in Pennsylvania, which allowed for universal mail-in voting, is unconstitutional. According to Kelly, for such a law to be legal, an amendment would have to be passed by the Pennsylvania Supreme Court. The deadline for Pennsylvania, the defendant in the case, to respond to the Supreme Court is Tuesday.

Raiklin is also calling for the Director of National Intelligence to assess possible foreign election interference and present a report to President Donald J. Trump. That, according to Raiklin, would happen after the Department of Defense and its many federal law enforcement entities fully investigate election fraud, including fraud in the form of mail-in ballots and and absentee ballots.

The Congress, too, is an important piece of Raiklin’s plan, which details how the Senate Intelligence and Judiciary Committees, along with the House Judiciary Committee, could convene to investigate claims of fraud over the next 30 days.

Raiklin also calls for the postponement of the hotly contested Georgia U.S. Senate runoffs, slated for January 5, until full investigations into presidential election fraud are completed.

The final key component to contesting the election results, according to Raiklin, is mass protest by American patriots, particularly in key cities like Philadelphia, Detroit, Milwaukee, and others in swing states where election fraud appears to be most rampant.