In a social media post, European Parliament representative for Poland Radek Sikorski praised the destruction of both Nord Stream pipelines and implied that the United States was responsible. Sikorski’s statement came on the same day that his own nation celebrated the completion of a new Baltic Pipeline that will run from Norway, through Denmark, to Poland. The project will lessen the continent’s reliance on Russian oil, which has sent energy markets into disarray as a result of the conflict in Ukraine and subsequent sanctions.

“Thank you, U.S.A.!” Sikorski wrote in a tweet praising the Nord Stream incidents. “BTW, there’s no shortage of pipeline capacity for taking gas from Russia to Western Europe, including Germany,” Sikorski later wrote in response to comments that pointed out potential economic fallout. 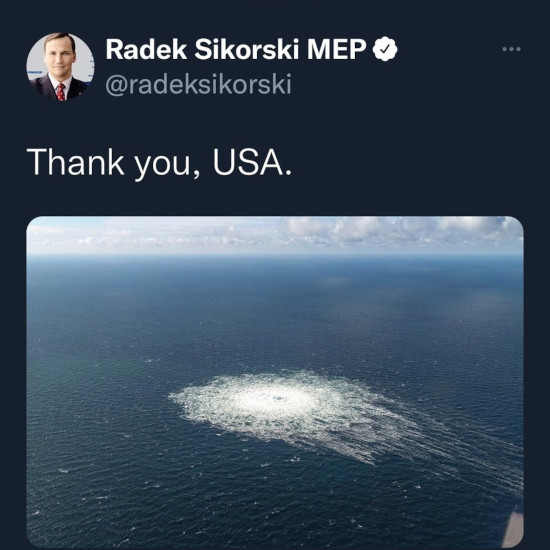 “Nordstream’s only logic was for Putin to be able to blackmail or wage war on Eastern Europe with impunity,” he added.

The Polish MEP also shared a video of President Biden saying that Nord Stream 2 would be off the table if Russia invaded Ukraine. “If Russia invades, that means tanks or troops crossing the border of Ukraine again, there will no longer be a Nord Stream 2,” Biden told reporters on February 7. “We will bring an end to it.”

When a reporter asked Biden how he could do that since Germany was in control of the project, the president replied: “I promise you: We will be able to do it.”

The Nord Stream 2 pipeline was set to become operational by the end of 2022, but the German government halted the project indefinitely after Russia invaded Ukraine in February. Nord Stream 1 had been operating at 20% capacity after the Kremlin limited flows in response to sanctions, but Russia’s state-owned energy giant Gazprom put an end to that in July, announcing that all flows would be halted going forward.

“All Ukrainian and Baltic sea states have opposed Nordstream’s construction for 20 years. Now $20 billion of scrap metal lies at the bottom of the sea, another cost to Russia of its criminal decision to invade Ukraine,” Sikorski added.

Poland officially opposed the construction of Nord Stream 2. The Polish Energy Regulatory Office sent a letter to Germany’s economic ministry in 2021 arguing that the pipeline, which would allow Russia to double its gas exports directly to Germany, might “jeopardize the security of gas supplies to certain member states, regions or even the entire European Union.”

The destruction of the Nord Stream pipelines came as European leaders announced the completion of a new Baltic Pipeline that will transport fuel from Norway to Poland, bypassing Russia. The project is set to come online on October 1 and is expected to reach full capacity by the end of November.