State legislators are applying pressure to their federal counterparts in The Palmetto State.

A group of lawmakers from South Carolina is urging Senators Lindsey Graham and Tim Scott, as well as the state’s entire delegation to the U.S. House of Representatives to reject electors from contested states during the January 6th joint Session of Congress.

Led by State Rep. Stewart Jones of the 14th House District, the group of 30 lawmakers voiced their “strong support” for Alabama Congressman Mo Brooks’ calls for a full investigation into the credible allegations of voter fraud, illegal voting, and election theft that plagued to 2020 Presidential Election.

“In Nevada, Native Americans appear to have traded their votes for Visa gift cards and jewelry,” one example read, with another citing the “more than 70,000 allegedly ineligible voters in Georgia” who cast ballots.

While Republican Representatives Ralph Norman, Joe Wilson, and Jeff Duncan have vowed not to certify the contested electors, Senators Lindsey Graham and Tim Scott are both expected to join Democrats in voting to officially name Joe Biden as President-elect of the United States.

This week, Senator Graham made headlines after ridiculing fellow Republicans’ plans to object to the slates of contested electors, calling the objections a “political dodge.” Graham also slammed a suggestion from Ted Cruz and 11 other Senators to form an investigatory committee to audit reported vote totals in contested states, claiming that by suggesting such a committee, Cruz is not “effectively fighting for President Trump.”

While Scott has remained mostly mum on the issue, instead opting to focus on pushing his own social-justice-oriented legislation, the Senator’s reputation has been damaged among voters over his support for mail-in voting ahead of the 2020 Presidential Election.

Both Scott and Graham have also faced the ire of voters over their apparently chummy relationships with Biden running mate, Senator Kamala Harris, with Graham offering Harris a fist bump on the Senate floor shortly following Election Day, and Scott approaching Harris to congratulate her on her election “victory.” 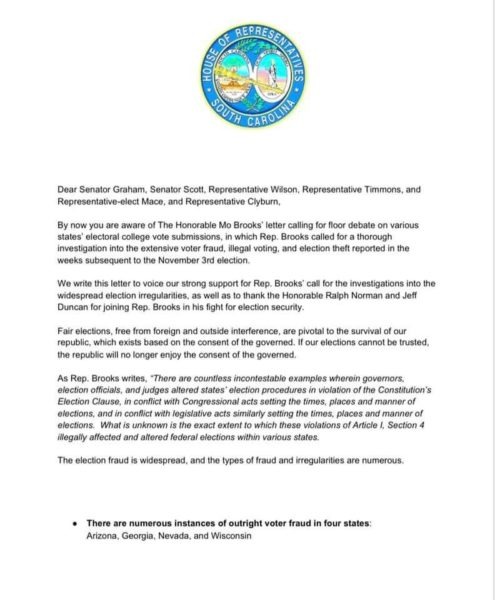